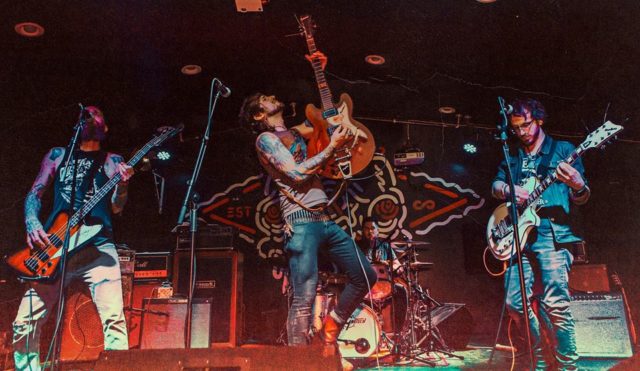 Milwaukee-based punk group Primitvs had their first show in December at Cactus Club and have had a few shows under their belt since. Although fairly new, they released their first album last month on Bandcamp.

The band may be “new,” but the members are anything but. Consisting of West Goad (guitar/vocals), Robbie Pauley (guitar/vocals), Nick Schafer (drums) and Ian Watson (bass/vocals), the group of veterans unsurprisingly crossed paths prior to the new project.

Robbie explains how they all came together: “We all met loosely through the punk and rock n roll scene, Ian (bass) and Nick (drums) had been playing together in Highlonesome. I knew Nick from my brother’s high school band and later through the band Gimme Crack. Nick had asked me about starting something a few years prior after seeing a video of an old project of mine. I had met Ian a few years ago when his band (Last False Hope) had played with my old group (Los Moruchos) and had been impressed by his intense stage demeanor. I was thrilled when Nick suggested the Ian may be interested in our new project. I had met West through being a fan of his then band Burning Sons. I really liked his energy and knew his skill and style were unmatched.

Nick and I recruited him for our band after meeting him at a Hot Snakes show. We were recorded by Paul Mirenda of National Recording Studio. We have our second release in the works right now.”

“Demos” is a high speed, true to form punk collection filled with raw energy and angst. While it comes to no surprise with a talented combo of musicians, the debut is a genuinely fun and rowdy time that comes off as both effortless and cohesive without compromising any quality. Listen below.