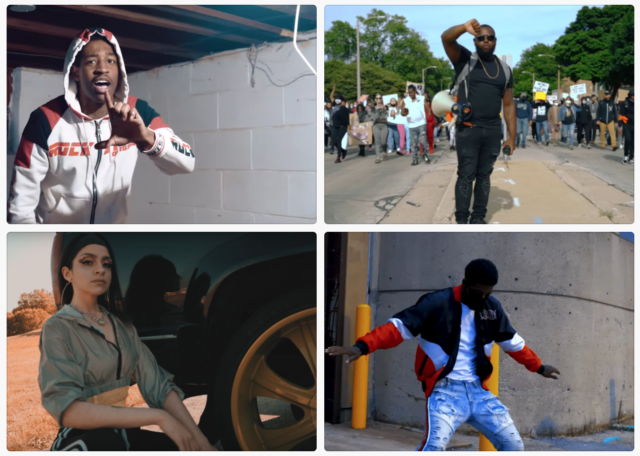 This month’s batch songs and videos doesn’t shy away from the pressing issues of our time — many of these tracks address social injustice, the Black Lives Matter protests and the coronavirus — but if you’re looking for some old-fashioned escapism, you’ll find that, too. Warmer weather tends to bring out the rowdier, more irreverent side of Milwaukee rappers, and over the last few weeks the city’s scene has delivered some truly inspired party music.

You knew this one was going to be wild from Chicken’s first Master P adlib. The steel drums set the tone for a breezy cypher, and while it’s Chicken’s snippy chorus that ties the whole thing together, everybody on the roster shows up, as each rapper tries to upstage the last verse in a bare minimum of bars. This is wicked fun.

Dip into the comments section of any of his videos, and you’ll find plenty of observers making the case for Spidey Mayweather as one of the city’s best rappers. It’s not a hard case to make: He’s got the sharp tongue of an insult comedian, the lung capacity of a marathon runner and the instincts of a mercenary. An even sharper sequel to his biggest track of 2019, “Goat 2” is just a parade of quotable bars. This line about the merits of keeping a low profile is gold: “I fell back like LeBron James’ hairline / It’s safe to say when you out of sight, you out of mind”

It’s been more than three months since the coronavirus shuttered the city, and it still hits me in the gut whenever I hear a perfect club track knowing that the clubs aren’t open for people to enjoy it in right now. It doesn’t take much imagination to picture how thoroughly Puerto Wiccan’s latest single would kill it at a club on a Friday night. The South Side rapper’s bars are heavy yet the beat is light on its toes, all infectious plink, and her chorus rattles around in your head well after the track ends.

It’s such a simple, elegant idea that I’m surprised I’ve never heard it used in a protest song before: a chanted chorus of “no justice, no peace.” Bossman B Love’s response to this spring’s protests, “Still Here” is both a call for change and a celebration of Black resilience, all filtered through the particulars of the most segregated city in America. Both the song and the video are filled with grace notes, from the bridge, where Bossman stops to say the names of Freddie Gray, Sandra Bland, Joel Acevedo, George Floyd and other victims of police violence, to the video’s moving cameo from his mother. There’s anger here, yes — if you’re paying attention it’s impossible not to be angry — but there’s also pride, and an effusive appreciation for generations of Americans that have stood up to racial injustice, including those who are doing it right now.

The thing I love the most about Brockhampton is the sense of surprise. Even when they’re off their game, there’s still the sense that anything could happen — you never know what ideas they’ll present next, or how far they’ll take them. Milwaukee’s Phat Nerdz crew is the one local act capable of giving me that same, Brockhampton-y thrill. From the blown-out beat to the unhinged flows, everything about “Shadow Clone” is extremely heightened, including the video, which was filmed at the peak of Milwaukee’s COVID-19 shutdown, when the city was at its most eerily empty.

I’ve been returning to up-and-comer SBE KP’s new album “Before The Riches” regularly since he dropped it a few weeks ago, in large part because it goes down so easy. It sets a mood and sticks with it, never wavering from its contemplative, late-night vibe. The whole album hits the mark, but its opener “Situations” sweetens the pot with an intensely personal verse from 3xSimpson, who’s having a hell of a year.

This spring’s protests and Milwaukee’s new George Floyd mural provide a somber backdrop for Kia Rap Princess’s new video, but the song itself details other kinds of tragedies. With each verse, Kia shares the stories of lives undervalued and lives lost too soon, not only channeling the poise and conviction of Ms. Lauryn Hill but also name checking her as well.

Quarantine doesn’t make things easy, but these days all you need to make a track soar is an internet connection and a vibe, and these three rappers have both covered. Wave Chapelle’s limber, carefree chorus sets the tone for this head-nodder of a track, and IshDARR and Ted Park both slay their verses.

Let’s end this month’s roundup on a somber note, with this smoldering track from the Latin hip-hop duo Browns Crew. An indictment of police violence, “Autonomía” may be the last track we hear from the duo for a little bit; on Facebook they announced they were postponing their planned releases out of solidarity with the Black Lives Matter movement. It speaks to how evergreen this subject matter is, though, that they actually released “Autonomía” weeks before George Floyd’s murder. “No one is free until we all are,” they wrote, “from our siblings in the prison system, community members terrorized by law enforcement, to our immigrant community in ICE detention centers.”

We’ve got you covered. In case you missed it, you can check out previous installments of this roundup featuring Shantii, 3XSimpson, Chicken 2Pots, Klassik, Destinee Lynn, Lil Saucy and more; 54 Baby Tre, TTG Rio, Lil Tre, Looney Bandz and more; and Lakeyah Danaee, Myndd, Lil D MKE, Nate Brady, Spaidez and others. We also wrote about the new Looney Babie and YFN Lucci single, rounded up the 50 Best Milwaukee Rap Songs of 2019, and explored the roots of the city’s rap resurgence in a piece for NPR Music.