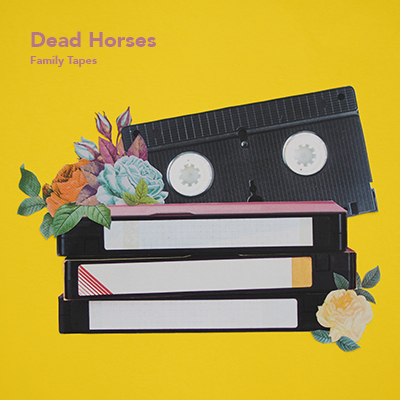 “Family Tapes” is first of a series of songs Dead Horses recorded at The Refuge, an artist residency located in a historic monastery in Appleton.

After watching her girlfriend digitize old home movies, Dead Horses’ front woman Sarah Vos started writing “Family Tapes,” which considers how remembering, or rather, replaying narratives from the past, can just as easily create or displace a sense of belonging. And how those feelings can change over time.

Following the release of the 2018 album, “My Mother the Moon,” which earned Dead Horses nods from Rolling Stone Country to No Depression, the band looked to their home state of Wisconsin instead of Nashville, Tennessee to focus on songwriting and recording. Following in the footsteps of Erin Rae, The Head and the Heart and most recently, Liz Cooper and the Stampede, Dead Horses welcomed an invitation to set up a residency at The Refuge, a non-profit arts foundation headquartered in the former Franciscan Monastery in Appleton, WI.

The band will be releasing music collected from this residency throughout 2019. However, their focus is now turned to an extensive “Family Tapes” winter tour kicking off later this week. Dead Horses will share bills with East Coast folk peers The Brother Brothers, Cicada Rhythm and Honeysuckle and includes their Cayamo debut.

Sarah Vos’s voice is so captivating. When she sings, it sounds like she is sharing something really personal with you. And she is…this song seems to be about taking a moment to reflect back on your past bad behaviors. Featuring a gorgeous acoustic guitar bit and a soft chorus of “ooooooh’s”…this is a song I could listen to on repeat, perfect for this very chilly day.