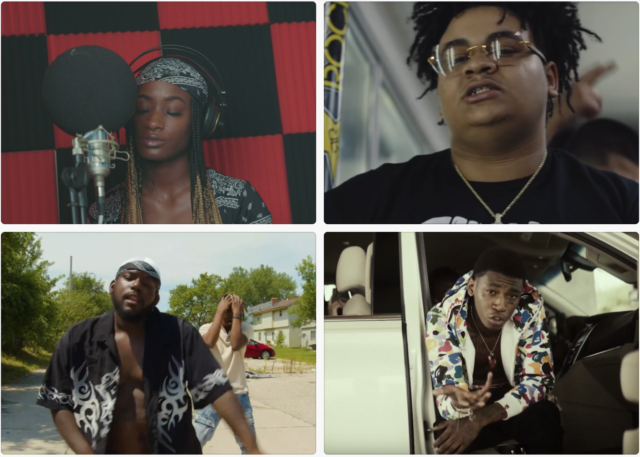 This month’s lineup is one of our strongest ever. We’ve got the latest from Thirtyk and Big Wan, Chosen One and Gorilla Will, FBE Savage and FBE Kash, K’Moni, J.O Eons, NilexNile and Spaidez, 3XSimpson, Donno, Diamond Banks, Lil D MKE and 54 Baby Trey.

Stream and read about them all below. [These songs contain explicit language; listener discretion is advised.]

Big Wan and 3hirtyk are two of the most economical rappers in Milwaukee, two artists almost incapable of dropping lazy bars or filler rhymes. And although they play it down between their cold flows and bone-dry lyrics, they’re low key two of the funniest rappers in the city, too. They teamed up this spring for a knockout track, and like its predecessor “Big Tymers” is just a ceaseless volley of great bars. Every line zings, every quip lands, no setup ends with the punchline you were expecting.

Gorilla Will’s verse kicks off this one with some gruff gravitas, but the song really soars once Chosen One’s angelic chorus kicks in. Even in the age of singing rappers, it’s rare to hear one who sings this blissful — Chosen’s voice is weightless, and the plinky pianos lift and frame it beautifully. Everything about this is so soulful.

These two. Milwaukee’s hardest-scheming duo, FBE Kash and FBE Savage make every track play like a buddy caper comedy, one of those movies where Chris Tucker and Charlie Sheen or whoever gleefully weave in and out of danger, talking themselves out of thorny situations with their silver tongues while crashing a lot of cars and moving a lot of money. Every track they cut is fast, audacious and infectious.

K’moni promises not to reveal too many specifics on this understated diss song, which never singles out its targets by name and pointedly omits key details. Even when she’s outlining her grievances in strategically broad strokes, though, the emotion comes across in her voice, which quivers with contempt and betrayal. Her lyrics speak volumes, but it’s her voice that tells the story.

With the MT Twins, 3XSimpson usually avoided the kind of straight-up, Detroit-type beats that are always an easy sell in our city. But on his own, the rapper has been trying out a variety of different sounds, and it’s been impressive hearing how well he adapts to all of them. His debut solo project “Strictly Business” was fantastic, and this new single has the potential to be his biggest yet — he sounds absolutely unstoppable over the titanic slap of this Reuel StopPlaying beat. There’s no shame in giving people what they want when you do it this well.

Donno – “Back from the Dead”

Speaking of the MT Twins, this summer Donno released one of the strongest Milwaukee rap full lengths of the year, “Greater Life,” an uncommonly intimate record that documented the formative relationships in his life. This new loosie finds him in straight spitter mode, but each bar is so tightly scripted that the whole track hangs together like a two and a half minute thesis statement.

I think even ASAP Ferg’s biggest fans would admit he’s not one of the most consistent rappers out there, but there’s a certain jolt you can only get from a Ferg track, a wild energy that’s missing from a lot of other rap. So I am very here for this song, dizzying, trunk-rattling cypher where J.O Eons, NilexNile and Spaidez pay homage to the Hood Pope in all his boisterous glory. This knocks.

Diamond Banks – “Told You That”

Where were you the first time you heard Dej Loaf’s “Try Me”? Once in a while a song comes along that doesn’t just feel like an event, it feels like the invention a whole new form of expression. Diamond Banks’ latest single brings back welcome memories of Dej Loaf’s breakthrough. She’s got the same sticky-sweet melodic sensibilities as Dej Loaf, the same nimble assurance, but she personalizes the sound, sing-rapping about her own distinct struggles. The subject matter is heavy, but the track is a pick-me-up.

54 Baby Tre proves that Chicken isn’t the only Milwaukee rapper who can rap over steel drums.

The MKE is right there in his name, but for my money Lil D MKE does Chicago’s strain of emotive, soul-bearing street rap nearly as well as anybody in that city. His tuneful voice aches and breaks in magnificent ways, and the searing guitar licks on this one underscore his conviction.

We’ve got you covered. You can check out previous installments of this roundup featuring Spidey Mayweather, Puerto Wiccan, Bossman B Love, Phat Nerdz, Wave Chapelle and more; Shantii, Chicken 2Pots, Klassik, Destinee Lynn, Lil Saucy and more; and 54 Baby Tre, TTG Rio, Lil Tre, Looney Bandz and more. We also rounded up the 50 Best Milwaukee Rap Songs of 2019, and explored the roots of the city’s rap resurgence in a piece for NPR Music.