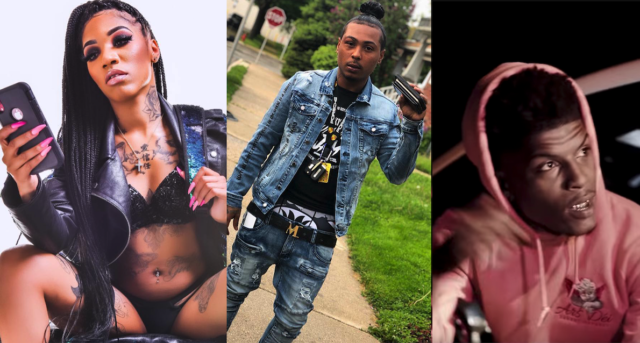 When Destinee Lynn boasts about being self-made and needing anybody else’s money on “Money Talk,” she’s not exaggerating. An R&B-singer-turned-rapper, Lynn is one of the Milwaukee rap scene’s great doers: She’s toured the country and collaborated with artists like North Carolina’s DJ Luke Nasty, and in addition to music she owns the Fantasy Girl Hair Boutique on Mitchell Street. A diamond-hard independence anthem, “Money Talk” might be the best showcase yet for her ferocious attitude, not to mention her sense of humor — she lands a great lyric involving Reggie “Smooth Az Butter” Brown, one of those “you’ve got to live here to appreciate it” references that makes Milwaukee rap such a blast.

Spanish Rice has one of the city’s most infectious ab-libs, an excited cheer of his own name (“Spanish Rice! Spanish Rice!”) that oozes mischief and mayhem. This summer he dropped his rowdiest single yet, an ode to reckless driving called “Curb Action,” but on his new track “Heart Broken” he tries something different: a poppy, lovelorn lament with shades of Juice WRLD. Is this the lane he’ll stay in? Probably not — if there’s one thing we learned from “Curb Action,” it’s that Spanish Rice really doesn’t respect lanes, anyway. Regardless of whether this is a new look or a one-off experiment, it’s always cool hearing artists try something new.

Earlier this year Lil Saucy dropped a project that’s likely to go down as one of Milwaukee’s best rap albums of 2019: “Slime Love,” Saucy’s spirited spin on Gunna/Thug-style Atlanta rap. His new single “Emotions” might be his heaviest, most heartfelt yet. So much rap music right now is implicitly (or even explicitly) about mental health and processing trauma, and Saucy doesn’t shy from the subject. There’s only so much one person can endure before they need to turn to an escape, the track argues. “I’ve been taking all these drugs, I’ve been over-drinking,” Saucy raps. “I’ve been having so much pain, I’ve been overthinking.”

By now the tradition is well established: A rapper gets out of jail, then celebrates their release by pouring everything they have into one passionate track announcing their freedom. Spidey Mayweather borrows his track after the biggest, most impactful of all of them, Tee Grizzley’s immortal “First Day Out,” a song that’s been done so many times that it’s become a challenge: If you’re going to tackle “First Day Out,” you’ve got to bring something new to it. And sure enough, Mayweather does. The muse brings out the best in him, and he tears through the track’s build up with as much vigor and passion as he does the loud climaxes. One of the knocks against street rap from some circles has been that it’s not “lyrical” enough, but rappers like Spidey Mayweather shred that argument to pieces. Make no mistake about it: This guy can rap, and some of his by-the-throat storytelling here is downright “Illmatic”-esque.

Of all the local rappers who have looked to Kendrick Lamar for inspiration (and there are a lot of them), Genesis Renji may be the one who’s dug deepest. The similarities to Kendrick lie not only in Renji’s ornate, showy flow, but also in the sense of almost aggressive introspection that underlines his songs: This is music in constant conflict with itself, music that’s constantly searching and questioning. On “Wannabe,” another track driven by existential quandaries, the ever-reflective MC is joined by IshDARR, who absolutely glides over the track with a frictionless verse. These two voices play off each other magnificently.

On the short list of the city’s most respected rappers, Solowke is right at the top. Between his hard raps, slick flow and impeccable ear for beats, it’s no mystery why so many of his peers continue to shout him out so often — he’s one of Milwaukee’s defining rap artists. According to his social media, Solowke is currently in jail and it’s unclear when he might get out, but his Instagram page has been teasing unreleased music. Hopefully everything else in his vault is as hard-hitting as “Be Patient,” a magnificent slapper built around a chest-thumping beat that imagines that kind of music Just Blaze might have made if he’d been 20 years younger and born in Milwaukee. It’s a truly one-of-a-kind beat.

You love to see it: Two rappers, each having a moment, crossing paths. In March, 54 Baby Trey earned a Pitchfork writeup for his ruminative single “Let Me Fall” (“On the mic, 54 Baby Trey is able to balance the aggression of street rap with somberness when referencing his inner struggles,” critic Alphonse Pierre wrote.) He also performed the song this month on stage at Summerfest with MT Twins, who just joined him on a new single “Spin His Block.” Mari Boy Mula Mar, meanwhile, is building a huge following with his unusual auto-tune, one of the most radical deliveries in the entire city. On “Noon,” which already has more than a half million streams on YouTube, the two play their very different styles off of each other, while branching out. Mula Mar even drops the auto-tune for his verse, which includes the video’s most meme-able moment: He also raps about the emoji thinking face while making the emoji thinking face.

Kaylee Crossfire is the kind of artist you can’t help but root for: a fearless performer who’s so serious about giving back to her community that she started the city’s Female Takeover to help support other young artists. She was one of this spring’s Backline artists, and soon we’ll get to hear her first new music since completing that program; her single “Baddie Alert” is set to drop Friday. But in the meantime here’s the latest video from her 2018 “Best of Both Worlds” collaboration with her regular sparring partner Kia Rap Princess: “Gifted,” an R&B-adjacent cut built around Kaylee’s titanic voice. It features some dagger-sharp bars from both rappers.

Few Milwaukee artists reach as many corners of the city’s rap scene as Spaidez, a rapper who’s as at home working with alternative-leaning rappers as he is trap-minded ones. Accompanied by a slick feature from Supurr Dupurr, on his new single “Over Me” Spaidez indulges his R&B side, crooning about relationship struggles with his usual everyman charm and easygoing sense of humor. Even on a song about relationship woes his enthusiasm for the music bleeds through every bar.

D. Bridge ft. Munch Lauren – “Too Early in the Morning”

D. Bridge and Munch Lauren aren’t artists I ever pictured working together. D. Bridge often leans a little more toward the alternative side of the spectrum, and usually seems most comfortable working underground, while Munch Lauren’s club-friendly instincts made him one of the biggest names in Milwaukee rap. So until the track I never realized how much they have in common, but they both sound right at home together, rapping over XYZ’s dark, heavily compressed production — a beat as taut and ready to snap as an overstretched rubber band.

And, finally, if you follow this station, you’ve probably heard a plug by now for Radio Milwaukee’s new podcast, “Backspin: The Search for Milwaukee’s First Hip-Hop Song.” It’s a must-listen not only for anybody who cares about Milwaukee hip-hop, but also for anybody fascinated by Milwaukee history, since it’s as much about about the culture of the city in the late ’70s and early ’80s as it is about rap music. Featuring interviews with local DJs, radio personalities and performers, it offers a snapshot of an under-documented moment in time when black music was thriving in the city, and when Milwaukee music was valued and supported.

You can listen to the podcast here, or subscribe to it wherever you get your podcasts.