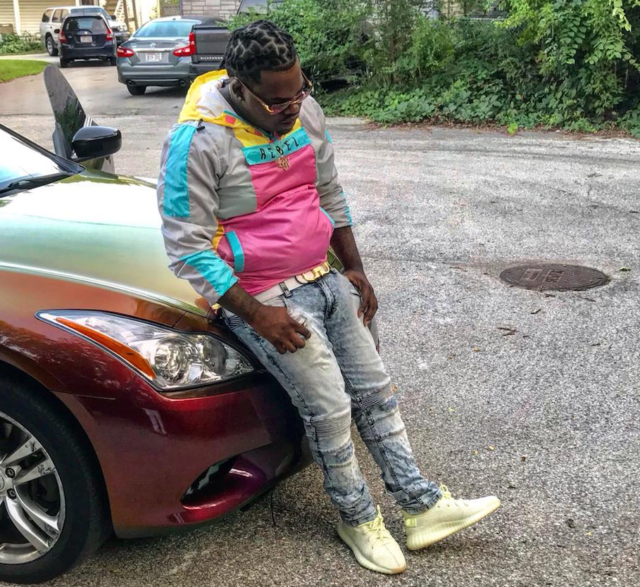 Milwaukee’s rap scene is too vast and decentralized to be summed up by any single artist or sound. Here at Radio Milwaukee, we try to showcase the variety of styles, voices and perspectives coming out of the local rap scene with our regular Milwaukee Rap Roundup, a spotlight on some of the city’s most exciting new albums, mixtapes, videos and odds and ends.

In this installment, we’ve got new music from BoodahDARR, Shle Berry and Dana Coppafeel, the latest volume of the city’s ambitious “Land By The Lake” compilation, new videos from Mari Boy Mula Mar and Hakeem Paragon and a new album by one of Milwaukee street rap’s great entertainers, YBN Kenny. Read about and stream them below. (Some of this music contains strong language; listener discretion is advised.)

Land by the Lake – Volume 3

There wasn’t anything quite like “Land By The Lake” when the first installment premiered five years ago. Curated by producer and engineer DSCRIBE, the album featured dozens of Milwaukee rappers and producers, many of them sharing tracks together for the first time, in an effort to build bridges in the local rap scene. Last week the compilation released its third installment, and like its predecessors it features a generations-spanning cast of spitters from around the region, among them AG Da Gift, Twan Mack, Genesis Renji, Rich P and King Myles, along with some choice production from studio vets like 40Mil, Mike Regal, JDL and Godxilla. Highlights include the Boogie Down-esque “Rude Bwoy,” the club-shaking “High Off The Bounce” and “Mean Streets of Milwaukee,” which features a suave performance from Sypher Lady X (who was recently spotlighted in a Radio Milwaukee video).

You can stream the comp below.

What had been the most anticipated local rap show of the summer ended in tragedy earlier this month, when a fight broke out at a Miramar Theatre concert that ended with three people shot outside the venue. I was at that show, and even as somebody who writes professionally it was hard to find words to convey the disillusionment that hung in the air afterward. Our hearts ached not only for the three people who were hospitalized, but for all the fans, some of them just teenagers, whose night ended in terror – kids who couldn’t even enjoy a summer concert without the disruption of violence.

At least one person on the bill was able to voice that disappointment and sorrow, though. YBN Kenny became an unlikely spokesperson for the entire scene in a series of TV news interviews that testified to the tragedy of a night that was supposed to be a celebration of music being cut short in such a horrible fashion. “All the hot local artist came out to one building, and all the fans came to support,” he told TMJ4. “We all just came together. Just a big show for the fans … It was kind of disappointing because I wanted the fans to see me, but due to the violence they had to shut it down.”

It helps to have a human face on stories like this, and Kenny gave the city one. He also comforted one of the victims, a 20-year-old who was shot in both feet. She contacted him on social media and said she was his biggest fan. “I reached back out to her, gave her my condolences and told her she is in my prayers,” he told Fox 6. “I told her next show I have, I’ll make sure she is backstage and gets in for free.” When things seem so bleak, these small reminders of human goodness go a long, long way.

When I call Kenny an “unlikely spokesperson,” by the way, it’s because anybody who listens to Kenny’s music knows that he’s a bit of a goofball. Even a lot of the city’s hardest rap music has an unabashed silly streak right now, and few embody it more fully than Kenny, who raps with a sailor’s mouth and a comedian’s sense of timing. His 2018 album “Ima 90’s Baby” was ridiculously fun, and last month he followed it up with a new one that’s every bit as wild and over-the-top: “Mr. Sh!t Talker,” which you can stream below. (Let that title be a warning: It contains language that some listeners may find offensive.)

Last month we premiered the opening track from Shle Berry’s new EP “Tampons,” which she described as a showcase for her harder-hitting material (read: no pop songs on this one). And sure enough, this brief, four-song set aims for the gut. It’s a 12-minute airing of grievances that finds Shle playing up the presence that’s made her one of the city’s can’t-miss headliners. (Speaking of those performances, it looks like her shows last weekend at PrideFest and Locust Street Fest were a thing to behold, to judge from this recap video from Gonzales Visuals.)

“Weird” might be the most abused word in rap right now. In truth weird is a low bar in a climate where it seems like basically any artist doing whatever Young Thug did three years ago gets credited for pushing boundaries. But Mari Boy Mula Mar truly, truly is different. The buzzing Milwaukee rapper has the most offbeat, radical delivery in the city, a surrealist, Auto-Tuned whimper that melts and oozes over his tracks like a microwaved marshmallow. His music may not be for everybody, but his creativity and commitment are a thing to behold.

I usually run a little cold on Travis Scott, whose music sounds deeply hollow to me. But one Milwaukee act who’s learned all the right lessons from Scott’s artsy, boutique trap is Hakeem Paragon, whose new album “No Heaven for Heathens” is a densely packed, modernist delight. If you missed it when it came out earlier this spring, it’s very worth checking out. You can also check out the video for its opening track, “No Heaven,” featuring Xzavier P.

Speaking of Wave Chapelle, the rapper launched a Friday Freestyle series this spring, and his latest installment is a stunner. It’s amazing how sometimes cellphone footage of an artist rapping in a car can be just as exciting as a fully produced music video.

Got challenged to do a more uptempo beat so here y’all go!

Hip-hop is a young person’s game, except when it’s not. Part of the joy of the genre has been following how veteran artists grow and mature and respond to the times. Danna Coppafeel has been a fixture of the city’s rap scene for more than two decades, and his smooth latest track joins him with two artists who have quite a bit of service time under their belts: Milwaukee cult favorite Stricklin, of eMC, and Brooklyn’s Skyzoo. All three exude wisdom and confidence.

In case you missed it

We wrote about the new Mudy EP, which cements the upstart Milwaukee rapper as one of the city’s most unique presences, as well as the incredibly creative new LP from Milwaukee expat s.al (formerly Safari Al). Both projects are highly, highly recommended.