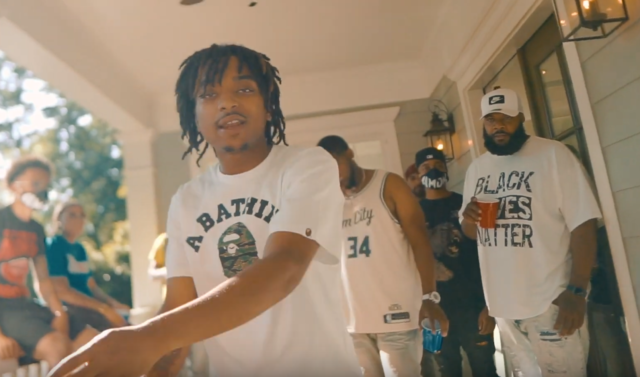 I lost some real time trying to figure out where rapper Slim4s was from based on his video for “Size 42.” The video is a mess of conflicting clues: It was filmed in Atlanta, but its director is from North Carolina and it was shared on a predominantly Milwaukee YouTube channel. And the song itself isn’t bound to any one region. A bleary fantasia of horns and synths, it shares some of the same sticky, melodic sensibilities of modern Atlanta rap, but its beat nods to a woozier, earlier era of hip-hop than most anything coming out of that city.

Who is this kid? And where is he from?

“I’m from Milwaukee,” Slim4s confirms. “From the North Side. I’ve lived here my whole life.”

Slim4s is new. So new, he explains, that “Size 42” is his first video, and he released it just a day after turning 18. And if he doesn’t sound all that much like anybody else in Milwaukee, it’s because he doesn’t listen to much Milwaukee rap. “That slap shit’s not for me,” he says. “I don’t like that sound.” He makes some exceptions for guys like Mari Boy Mula Mar and Lil Chicken (“that singing shit is going crazy,” he says), but he’s not trying to be a Milwaukee rapper. He wants to be an industry rapper.

“I’m different,” he says. Where other rappers work fast, he says, he takes his time. Others brag about not writing; he writes. And his melodic sensibilities are distinct enough that on “Size 42” he was able to what turned out to be a Detroit-type beat and turn it into something that sounds utterly foreign to Detroit.

But still: It’s just one song. It could be a fluke. And most rappers who brag about being different, of course, tend not to be nearly as unique as they believe. To that, Slim4s responds, “I just started. Give me two months.”

“My shit is crazy, bro!” he insists. “That’s not even my best song! I got way more fire. Give me just two months. Y’all gonna see I’m different for real.”

You can stream “Size 42” below. Be advised the song contains strong language.