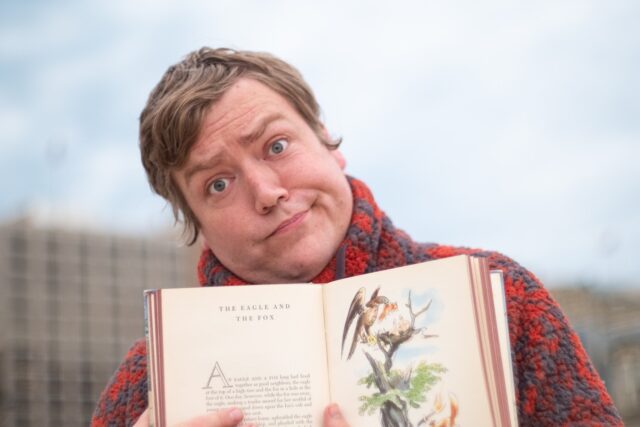 The new series is just as energetic and colorful as the Seuss/Dre series in a similar setup, with original lyrics and illustrations based on well-known fairy tales. Created with an all-local team, producer Kurt Ravenwood describes the project as a “… a bit of a family affair to bring each episode home. The most amazing thing is we can fully produce this show in Milwaukee while socially isolated from each other, and that works because we’ve built so much trust. I’m really proud of the team we’ve gathered.”

Radio Milwaukee called up the creator Wes Tank to find out more about the new series.

You are an artist participating in a variety of media, could you sum up everything you’re doing?

Congrats on the new series! Can you tell us how “StoryRaps” came about?

“Because of the success of the Seuss videos on YouTube, Kidoodle reached out and wanted to do an original show with me, based on that, but using original, public domain fairytales and nursery rhymes.”

“Kidoodle.TV is really awesome, based in Canada. They are a completely free streaming service for kids. All their content is previewed by parents and grandparents. All of their content is for kids. It’s available on all connected TVs, Roku, Fire TV, mobile devices… they have all sorts of cool stuff.

Everyone that works there is super nice. It may have something to do with the Canadian influence. It meant a lot to me that they reached out and wanted to do this, because I think the content is made for kids instead of something like YouTube. Kids data is not being taken like it is on YouTube, you’re not going to see unsavory comments, and you’re not going to go down a rabbit hole where kids end up watching videos they shouldn’t.

Will it look similar to the Dr. Seuss videos?

“I’ve been writing original raps based on public domain stories. Carol Brandt has been doing illustrations along with Kurt and Lydia Ravenwood. Kurt is also a producer on the show. Carol draws the images, Lydia lays it out like an actual children’s book and Kurt goes into After Effects and animates the layout. Before, when we were doing Dr. Seuss books, we would scan the book and make an animation out of that. Now we don’t have a book, so we had to make one. Hopefully one day it will become a real book.”

“Yep. So far I’ve been working with Josh Evert on beats as well as Sean Behling – who I worked with in Antler Antennas. We had some awesome songs and a great live act, but we ended before the scene really blossomed. I feel like the songs we had on that relate to what I’m doing now sonically, more than my WC Tank project. Josh has a distinct sound and Sean does as well.”

Did you ever see yourself doing this?

“I thought I was done rapping before the Seuss videos. I hadn’t made any new rap songs in a few years, the only rapping I was doing was the live performances of Dr. Seuss songs at Bookworm Gardens in Sheboygan. Every year they ask me back to rap at their annual “Happily Haunted” fundraiser. Those songs were the only ones I was performing at that point. I wanted to focus on filmmaking and developing my company TankThink. Rap seemed less and less of the artistic picture for me. I was fine with that, but I knew I had these Dr. Seuss songs and needed to archive them somehow. When quarantine happened and I didn’t have much work, I decided to put these up on YouTube, I didn’t care how they would do, I wanted to have them archived as a project I have done. Lo and behold, that changed everything for me. They are at around 10 million views now.  I was lucky enough to get a deal out of what I was posting there. I feel really, really lucky and blessed to have had this happen. I hope I can continue to make lots of videos with Kidoodle.”

The show premieres on Aug. 6 on the Kidoodle.TV app. To watch the show, download Kidoodle from your favorite app store or smart TV.

Watch an episode of StoryRaps, “The Three Little Pigs” below: