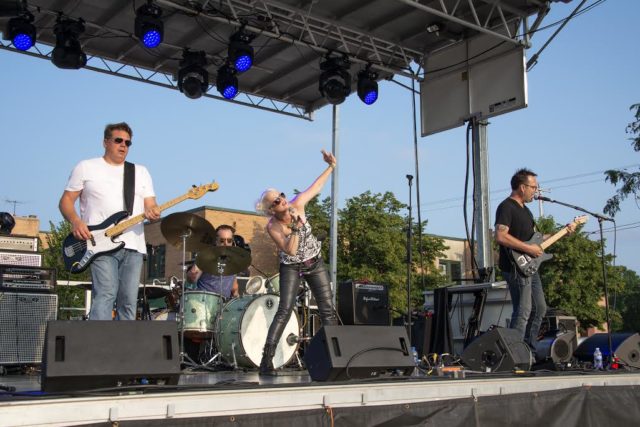 If you’ve ever wondered what it would sound like if bands like Heart, The Cure and Alanis Morissette ever collaborated, maybe you should listen to Rocket Cat‘s new song, “Paper Dreams.” The powerful vocals and lyrics carry the song over top of a catchy guitar riff. The unique chord progression makes me feel like I’m playing an old ’80s joystick video game and I’m on the final level, about to set the high score. It has an uplifting melody and feel to it. I like the direction Rocket Cat is going in and I’m also 100 percent here for the band’s name. It’s memorable and unique, just like this song.

Listen to “Paper Dreams” by Rocket Cat below.

Guitarist Chris Guse (Mixtape, Parallel, Jessie’s First Time), bassist Dave Maurer (Mixtape, Sacred, Signal Daddy, Parallel), drummer Steve Vorass (Mixtape, Sacred, Mouse Corn, Bright Black, I’m Not a Pilot) and vocalist/lyricist Suzanne Singh (Mixtape, Smack Leveaux) skillfully blend their backgrounds in alternative, progressive and hard rock, as well as power pop. Drawing heavily from the music of their youth, the band’s sound is fresh yet familiar. A careful listen often reveals an ’80s influence in a guitar riff, drum beat or vocal melody. The direction of the songs are often unpredictable yet accessible, sparking connections then slipping just out of reach. The songs are written with lush instrumental and vocal layers, giving them depth and fullness. Listeners can focus on the groove at the surface or immerse themselves into the density of the lyrics, melody and musical texture.

“Paper Dreams,” an anthem of courage in the face of obstruction, is the first single off the band’s sophomore album “Little Lights,” coming out in April 5 as a 10-song LP.

Also on April 5, the two-time WAMI (Wisconsin Area Music Industry) Award nominee will host a release party at Anodyne in Walker’s Point with special guests Flat Teeth and Mortgage Freeman to celebrate the new album as well as their three-year band anniversary.

In addition to the LP release, Rocket Cat is hosting a music video premiere screening at No Studios on June 1 at 7:30 p.m. with live performances from Rocket Cat and The Keystones.