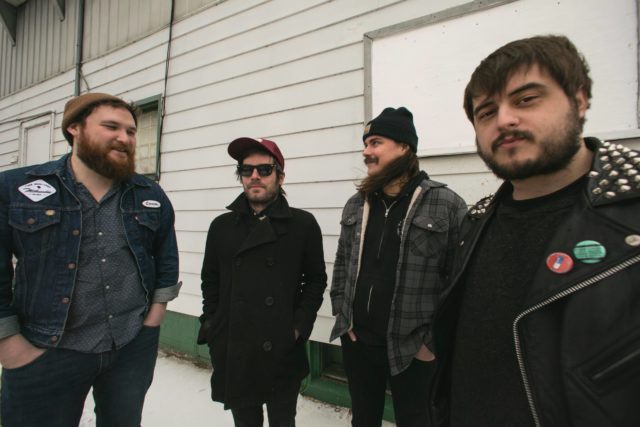 Today we’re not only premiering the Milwaukee punk quartet Sex Scenes’ track “Old Ones” on the air, but we’re streaming the band’s entire split 12-inch with Madison’s Fire Heads ahead of its Aug. 16 release on Big Neck Records. The two bands will tag team a pair of release shows Aug. 15 in Milwaukee at High Dive and Aug. 16 in Madison at Mickey’s Tavern. You can read about Sex Scenes and stream the split below.

Sex Scenes make ugly music. Not so much in the literal sense — although, yes, sometimes in the literal sense — but in a thematic one. Singer Zach Otto writes unflinchingly about personal shortcomings and toxic character flaws, and the toll of leading a selfish life. He’s an absolutely rabid presence. If Stephen King’s Cujo fronted a band, it might sound something like this.

And while the band (which includes Harrison Colby, Connor LaMue and Gregg Twigg) plays this music for thrills — every song is short, fast and ripping — they never romanticize its subject matter. Otto’s brutish growl only emphasizes how grotesque the sentiments driving these songs are.

The result is a pointed inversion of punk’s rebel tropes, a takedown of the id-driven mindset that rock ‘n’ roll has historically glorified. For every badass raising hell, Otto’s lyrics remind us, there’s some pour soul on the receiving end of it. Sex Scenes’ new album invites listeners to laugh at humanity’s worst instincts, and maybe even identify with them a little. But it refuses to condone them.

“‘Old Ones’ harkens back to a time of Lovecraftian monsters and unknown horrors. Underneath the surface it’s a coming to terms with understanding the worst monsters are in the mirror. It was also one of the first ones we wrote with new drummer Gregg Twigg.” – Sex Scenes singer Zach Otto