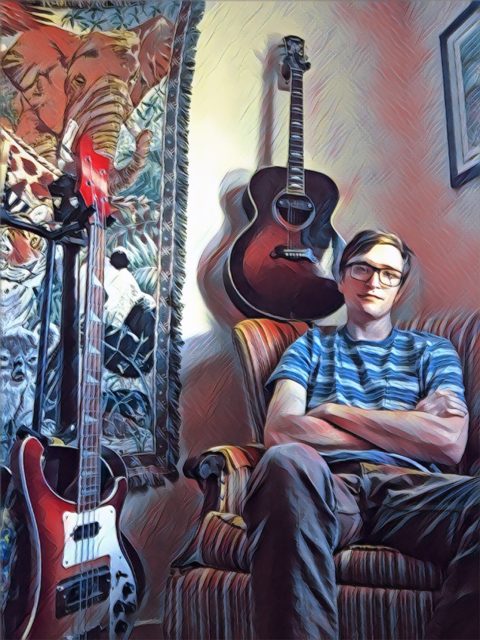 A mix of indie, pop-rock and experimental, the album is welded from styles Anderson is experienced with, but the foundation is unexpected for him.  The debut pushes Anderson outside the familiarity of his string instruments and instead takes a synth-heavy approach.

“The album is very different than any music I’ve made in the past,” he says. “I didn’t hold myself to any boundaries or limitations when it came to layering or instrumentation. Part of that freedom comes with the fact that I haven’t thought on how I will translate the songs live yet […] but that will come with time and more experience. I’m used to playing on stage with an acoustic guitar or a bass, not with synthesizers and computers.”

Supertentacles (photo courtesy of the artist)

Anderson says Supertentacles pushed him down an unexpected path.

“The project came together a little over a year ago,” he says. “I decided to go back to school to study audio production and engineering at MATC. I had some self-taught recording skills, but once I started classes there I knew I found my passion. I started acquiring more gear so I could record at home and practice new techniques I was learning in school. Songs started pouring out and I knew I had to make an outlet for them. Aside from the 10 songs on this album, there are 20-30 more in the works right now.”

When asked about the interesting name choice, Anderson didn’t look too far. “It’s been my Xbox gamer tag for years. When I was trying to think of a moniker for myself that seemed like an obvious choice. Plus, I love names that invoke imagery. There is a lot of potential for artwork with the name Supertentacles.”

Listen to the album below via Bandcamp (it is also available on all streaming services).

Supertentacles is a new moniker from Milwaukee musician Sean Anderson (from YUM YUM CULT). After a few single releases late last year, we finally have his anticipated self-titled product.