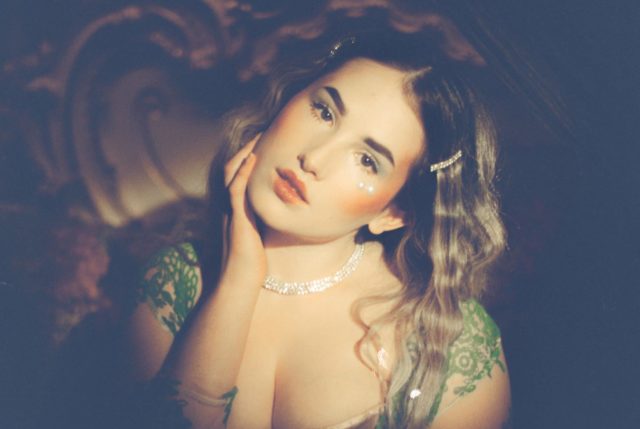 Milwaukee pop singer Valerie Lighthart’s new single “Savior” is a loaded statement disguised as a light trifle. Produced by EDM maestro Crystal Knives, the bombastic track is an indictment of those who put women on a pedestal to feed their own hero complexes — guys who see women through “rose-colored Ray Bans,” as Lighthart sings on the track.

Today Lighthart has shared a video for the song that’s every bit as pointed as the track itself. Shot and directed by Emry Briskey, the video frames Lighthart against a colorful Victorian backdrop fit for a Sophia Coppola movie, while the camera’s gaze mimics that of the men Lighthart depicts in the song.

You can stream the video and read about it below. The song will appear on Lighthart’s upcoming EP “PT. I: THE GODDESS.”

“Savior” is a cinematic pop track about being loved and worshipped for things that you aren’t. It plays with the fun of persona, and in the music video I wanted to expand upon that idea. I wanted to create something light and fun at first glance, that becomes more and more self-aware the more that it’s viewed. It was filmed in the decadent and unique Boutique Photo Loft that was created by artist Shari Cornes, and is largely performance-driven. It starts out fun, light, and, driven, and as the scenery changes, the performativity becomes more overt, signified by the presence of constant mirrors that are played to, and shots in a dark and isolated space on an old camera. I wanted the piece to be lighthearted enough to be enjoyed only for what it is, but to contain different layers and thematic elements to be unwrapped by the viewer who wishes to take a closer look. I intended that closer look to inspire us to become aware of ourselves as audience members, and our participation as consumers in a media-driven culture that glorifies ornamentation.

The song in and of itself was produced and co-written by Crystal Knives, an immensely talented Milwaukee-based producer with a special and attuned ear for pop music, and mixed by Daniel Holter of Wire & Vice out of Seattle. The clarity in his work and deep attention to detail is so crisply heard and valued, as well as that of Justin Perkins at Mystery Room Mastering, who mastered the track.

The video was carefully shot by the keen and distinctive eye of long-time friend and talented creative collaborator Emry Briskey, who also shot past video Love & Money. The crew consisted of hair & make-up artist Aby Farrey with a wonderfully fleshed-out and vividly imaginative approach, experienced light wizard of a gaffer David Naida, and brilliant and warm on-set photographer Alisha Hall. All of the vibrant and creative visions combined for something that was timeless and distinctive, taking aesthetic inspirations from the Victorian era as well as distressed and glamorous starlets of the 1930s and 1950s. It culminated in a piece both fun to watch and to analyze.