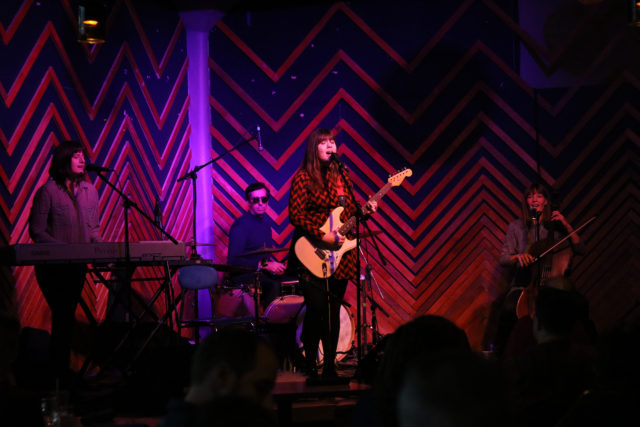 Over the last six months, Milwaukee indie pop group Warhola Cats released two singles from their latest album, “Eros + Vibes.” From the singles, it was clear the album would be a form of narrative, addressing heartache, consequences and the healing that follow.

I talked to Elisabeth Gasparka (vocals, electric guitar, keyboard) about their growth, the evolution of the album and the catharsis that comes from songwriting.

While their two singles, “Stars Over the Lake” and “Make Me,” contemplate the realities of parting and the aftermath of such, the tracks were reactionary to what was happening.

“The singles that preceded this album were of the moment. They don’t really “toast the Milwaukee mundane” but rather, they respond to heartache by trying to sort out what’s good, linger in what feels true,” Elisabeth explains. “I hate to own up to this, because I feel like writers like to have a weird claim on despair…but heartache is probably the most mundane, human thing of all.”

With that level of transparency, Eros + Vibes takes a stark, relatable look into the turbulent highs and lows of navigating life.

“A new chapter of songwriting was ushered in for me with the writing of “On the Road” back in 2018. That’s why it begins the album. In a matter of a couple years, my family’s reality was completely redefined with the simultaneous health decline of both of my parents who lived on the east coast.

Grief has this way of taking the elements of your life, and throwing them up into the air. When they hit the ground, they might be totally changed. I found myself at that time to be unrecognizable. After my dad passed, some time later I kind of woke up in the midst of my processing, and I struggled with a sense of dislocation.

The songs of this album start from that dislocation, and are about desire, embodiment, and delving into personal mythology. When grief of a large magnitude happens, it opens up a wellspring of the heartbreak that came before. All the complicated things you never fully untangled get resurfaced.”

However, with that sense of using songs as a way to process and reflect, Elisabeth uses the catharsis a form of growth and grounding.

“There’s something healing in following the muse wherever it leads. Trust in that is at the heart of this album. Star World Moon and Angel of Bay View are both examples of how this collection of songs are reflexive. They are about “the other,” but also about how people, objects and spaces are guides for us, and call into question how we define ourselves.

Songwriting is an exercise in divination— where we take a risk to articulate glimpses of truths that are shifting, while it’s all still underway. What’s true for a moment can be true forever in a song.”