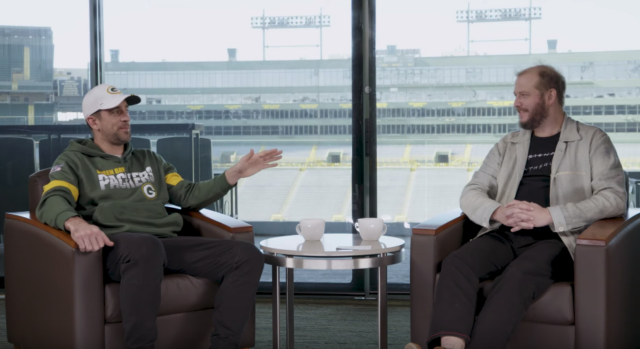 GQ must have some market research directing them to target Wisconsin. The magazine has rounded up two of the state’s most revered figures at Lambeau Field for the latest installment of its One-on-One series: Packers quarterback Aaron Rodgers and Bon Iver songwriter Justin Vernon. It turns out they’re fans of each other’s work.

The pairing is a little random by design, but their conversation is meatier than you might expect, as Vernon goes into his songwriting process and discusses the origins of Bon Iver’s “Holocene.” He also floats the idea of getting a tattoo with Rodgers.

In perhaps the meatiest exchange, the two discuss their career expiration dates. “I’m definitely in the second half, the back half, of my career,” Rodgers admits, explaining that he’d like to play football until he’s 40.

Vernon admits that as a musician he has it a little bit easier: He can keep playing shows until he’s 80, if he wants. Watch the video below.