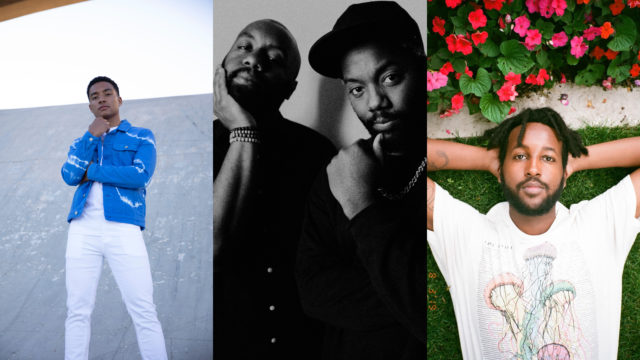 Backline has announced the third group of Milwaukee musicians selected for its intensive 12-week accelerator program. R&B and pop singer Bravo, the electro-pop duo Immortal Girlfriend and rapper WebsterX were chosen by a national panel of judges from more than 300 applications.

A collaboration between 88Nine Radio Milwaukee and gener8tor, Backline takes a startup accelerator approach to the Milwaukee music scene, providing selected artists with $20,000 grants as part of an intensive mentorship program tailored to each artist’s needs. The artists have already begun that 12-week program.

“This cohort is very special,” Backline Program Director Mag Rodriguez said in a statement. “These artists represent what makes Milwaukee such a rich and diverse music city. Just in the last month of starting the program, we have accomplished so much, and we expect a big year for all of them in 2020.”

Learn more about these artists below.

One of the leading figures in Milwaukee’s current hip-hop renaissance, WebsterX garnered national attention for his 2015 single “Doomsday,” and has remained a favorite of rap blogs and local festivals ever since. A founding member of the city’s New Age Narcissism collective, he’s opened for acts like Earl Sweatshirt, D.R.A.M. and Lupe Fiasco, and has been a champion of all-ages spaces in the city as a co-founder of the youth organization Freespace and a board member of the music venue The New State. Last year he followed up his 2017 album “Daymares” with a series of new singles.

Brothers William and Kevin Bush made their debut as the electronic duo Immortal Girlfriend with their retro-tinged 2017 “Daybreak” EP, and in the two years since the two have become one of the city’s most active live acts, performing at Flannel Fest, the Bay View Bash, Chill on the Hill, 414 Live and club stages all over the city. 88Nine has played their songs “Summer Dream,” “Happy Idiot” and “Daybreak.”

“A lifelong singer with a voice and personality that cuts through the clutter of music being released each day, Bravo’s plan is to bring flavor, soul and purpose to popular music,” according to his Backline bio. You can find him on Facebook.

See them live at the Radio Milwaukee Music Awards

Backline’s fall artists will perform along with the program’s spring artists — REYNA, Klassik and Kaylee Crossfire — at the 12th annual Radio Milwaukee Music Awards at Turner Hall Ballroom Dec. 14. Tickets are $12 in advance and $15 at the door. The event starts at 6:30 p.m. (doors at 5:30 p.m.). Online voting for the music awards begins Nov. 6 at radiomilwaukee.wpengine.com.