You Should Know: Browns Crew

You Should Know: Browns Crew 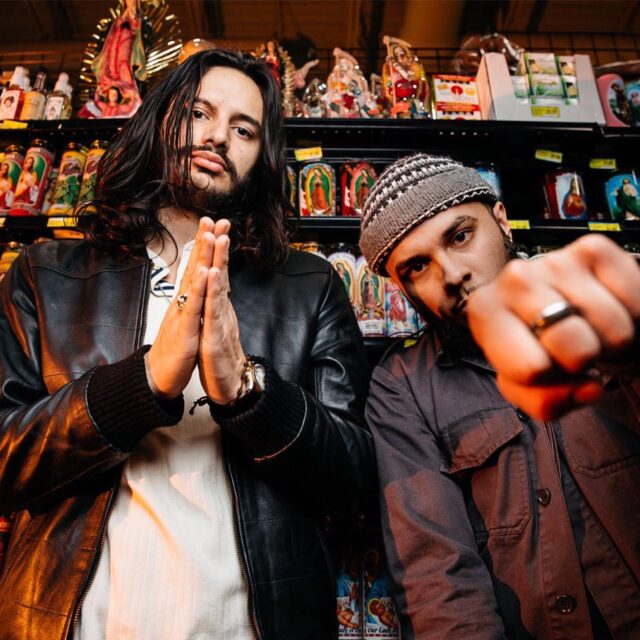 Browns Crew is hip-hop duo Cristo Paz and El Sebas – it’s also a band, a vibe and a community, and they want you to know you can be Browns Crew, too. Connecting on a trip to Oaxaca, Mexico while inspired by the art of the Resistance, the duo has since taken off in both Spanish and English circles, winning Song of the Year at last year’s Radio Milwaukee Music Awards for the Spanish single “Mil Aires.”

How did you meet? What is the Browns Crew origin story?

Cristo: We met in middle school, but we really became friends in high school. We would rap at parties, it would be like, “Aw, Cris and Sebas are here, put on some beats!” But it was really on a trip to Oaxaca we went to in 2011. Like, “Hey brah, this is cool we freestyle but we should really start recording and be more official than a party or a thing at the lunch table.” We settled on a name and from there, when we got back we hit it running and recorded our first mixtape.

Sebas: I think it’s important to note why we were down there [in Oaxaca]. We weren’t there on the beach, sipping palomas and had this idea, “Let’s make music.” When we went down there, we were already on the community-organizing tip, but that really opened our eyes to how art is used as a tool of resistance. We would see protest date graffiti in the street, we housed with somebody who ran a pirate radio to get out information. Just being in that environment and being as young as we were; I was a senior in high school, he was a freshman in college, just seeing adults living this showed us. Their art is pushing that forward. That really leveled up our consciousness, the awareness of ourselves in our space that we take up.

Cristo: That is key. Even the name “Browns Crew” is a nod to grounds crew, and people who work the earth, people who work landscaping… the gamut of people who are laborers, working with their hands and sculpting the earth. That was one of the reasons we chose the name.

Taking the experience seeing art as resistance in Oaxaca, with everything going on in America, how are you using your art in these times?

S: We were having this conversation too, because we were hesitant to push our music and content, making sure space was being made for what was going on. After having several talks about it and having things sit, we came to the conclusion that creating is resistance in itself. Maybe you create something that is not super relevant to social political movements right now, it doesn’t make it any less valuable or any less you. We kind of crossed the river by feeling for stones, finding where our space is in this Black genre.

We’re creating, we’ve got some tracks coming out in October, November and December; both solo and collaboratively. I’m just trying to continue to create amidst the madness, despite it being difficult sometimes to find inspiration.

C: The track we released in May, “Autonomía” is a protest song. What’s wild is we dropped that song right before the murder of George Floyd and it wasn’t even intentional, we were about to begin our roll-out plan.

It’s a song we had been performing for a long time, we wanted to give it a life we felt would give it more justice… no pun intended. We put that song out and shortly after, the whole climate shifted, an awakening of things that have been brewing for hundreds of years here. Initially that was going to be the beginning of our roll-out but when the uprisings started happening, and the pandemic we said, “You know what, the rest of the music we were going to put out is not necessary right now, it’s not adding to the conversation. We need to give space to these issues.”

S: Plugging into shit, too. Being active. Your energy capacity changes as things evolve. During that time whether or not you were protesting or posting or doing research… it’s taxing on your mental and your spirit. It was good for us to pause, with so much going on. We were trying to find out how we could best support what was going on. I don’t think it was a bad thing, if anything it gave us time to breath and reflect on that tip.

You record music both as solo projects and Browns Crew, how do you differentiate that?

S: The way we see it, Browns Crew is Cris and I. If I drop a track without Cris I’m “Sebas of Browns Crew” and the same for Cris, with the same understanding. I think it’s really healthy to do that, because we feed off each other and it gives us a chance to explore. We’re not always feeling the same. We obviously intersect at some point, but our upbringings too, add a lot. I showed him one from my back, back pocket. It’s not Hip Hop, not really Latin… funky-ish. I thought he wasn’t going to vibe with it but it was his favorite one. I didn’t expect that. Being able to share those sounds and ideas is healthy and also levels us up. It’s friendly competition; inspiration, leveling up. If I make it, he makes it. If he makes it, I better make it. It’s fun and it keeps things with less pressure. It also gives us more content.

C: All of it we’ll use the Browns Crew platform. Some people say, “You should put everything out as Browns Crew.” But it’s not. This is me, talking. Some are more personal and I’m the narrator and I’m the only one sharing the story with you. My homie is not gonna hop on and say tell you about their life, you know.

The way I like to think of it… it’s always like, “Who is Browns Crew?” Me and Sebas started it, and me and him are together and that’s Browns Crew. We performed with a live band in 2019, when we were hitting the festival circuit real heavy… it’s Browns Crew. Everybody’s got the shirt with the name on it. We’re all Browns Crew. The people that rock with us, that listen to what we say and they like it, it speaks to them…they’re Browns Crew.

S: YOU can be Browns Crew too, if you’re down.

You do such a great job blending cultures and genres, was that intentional?

C: A lot of my family doesn’t speak English. When I first started rapping, I only rapped in English. I want something my family can understand. I want something that makes sense to them; to be the me they interact with on some level. When I started writing in Spanish, “Mil Aires” got all this love and then I had cousins saying, “You’re not going to write anything in English?” Other people say, “This is hot, I don’t know what you’re saying but this is hot.” I can do this in English or Spanish. Every day I’m thinking in English and Spanish, depending on the context.

S: I grew up learning Spanish before I learned English. When I write in English, my flow is different. When I write in Spanish I’m a lot more melodic and vulnerable, it comes out a lot easier. English sounds choppy and forced. It’s allowed me to explore that, too. It also has me thinking, what differentiates Browns Crew? We rap about different stuff or this or that, but who else is dropping hot ass shit in Spanish in the city? I think Spanish to me, facilitates what I want to say and separates us from the pack. Winning the award, I was shocked that a Spanish song won “Song of the Year” [at the Radio Milwaukee Music Awards]. It was more affirming for me, we’re on the right track.

I feel like hip-hop is personal, whether it’s your own stories or characters. How does it feel to be so vulnerable and raw emotionally?

S: I’ve noticed when you’re for real vulnerable, you’re almost hesitant to spit it or put it out. At least for me. There’s also strength from vulnerability. Hip-hop itself is birthed from pain and being vulnerable and working through that. It’s a process I’m still getting comfortable with and how to channel that into music. There are so many emotions someone might be feeling and sometimes I don’t even know how to say what I’m feeling, I just don’t. Continuing to listen to myself and work through that. It’s a continuous thing. It’s not like, “I’m vulnerable! I can write now!” It’s continuous to share and learn more about myself.

C: For me, there’s a whole not wanting to be put into a box. Because we are involved a lot in our community, people expect everything we say to be conscious. That’s cool, we’re about that in real life, but when I’m at a party I’m not always trying to hear something conscious. “Mil Aires” was our “song of the year,” that track isn’t just a conscious track. It’s from our consciousness, it’s where we operate from, there’s some real everyday life stuff written into the song, but at the end of the day it’s supposed to be a party track, an “enjoy yourself” track. We’re talking about all the things people are doing during the pandemic; people are organizing, sharing information. If you’re just making sure that you’re feeling good, that’s important too. That’s resistance as well.

Out now: “REV” Remixes – compilation of remixes from the single “REV” on Browns Crew EP