You Should Know Negative/Positive

You Should Know Negative/Positive 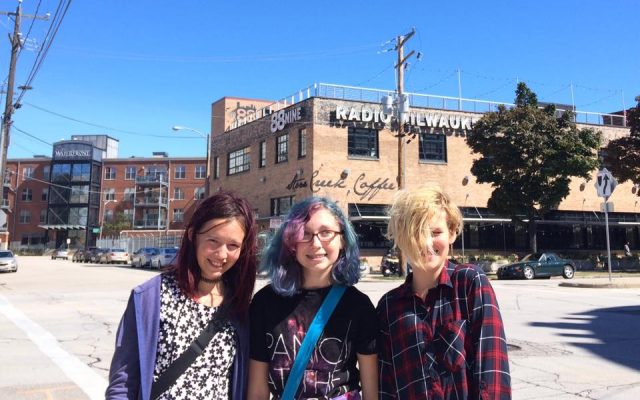 Negative/Positive have been hitting the festival circuit hard this summer with no signs of slowing down. Fresh on the release of their debut album “Lumanescent,” the DIY indie punk trio has plenty of dates lined up before the season is over, including Bay View Bash and Sat. Nite Duets album release show. What makes them stand out even more than their quick rise is their age – no member is old enough to drive to their gigs.

Milwaukee tween band on the rise

1. How did Negative/Positive get started?

Ava G.: We went to Girls Rock MKE camp during the first year we came together. We decided should keep doing it and we did. We definitely took it from where we started and grew it a lot from that. Like, if you compared our first song to one of our current ones, there is a lot of difference, but we started practicing in a basement weekly and decided to keep doing what we did at the camp.

Was it hard to go it alone without your coaches?

Ava G. Well, the majority of our first practices were bad jokes and not much practice. We needed a little guidance because we didn’t really work much on the songs, but now we do.

Ava A.: I come up with a name usually before we write a song.

Ava G.: Sometimes. A lot of the time, we’ll come to practice ready to continue a song and Ava will just say, “I have a cool song title.” And we’ll say, “cool.”

Ava A.: Two of the songs I came up with the name before we actually had the song. “Guys, I have these good song names, I don’t have a song for them yet.”

Ava G. Usually it starts with a song title and a topic or one or the other, because we want to write a song about something. We come up with lyrics, we come up with music and build off that title or topic.

Ava A.: I think it is really fun, but I do want people to hear what we’re trying to say in our songs.

Ava G.: Yeah. One of our songs is about reading and a book series that Ava and I really like [Percy Jackson]. So, some of them are more fun like that. Other ones are about, say, stupid fashion trends like women’s jeans that don’t have pockets while other jeans do. 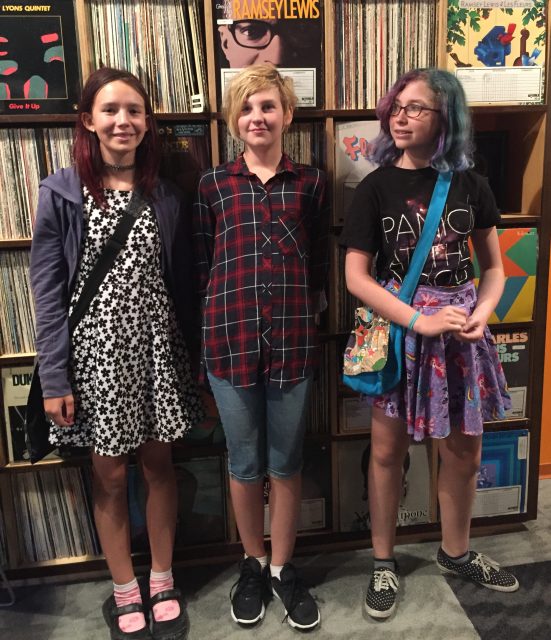 2. You are playing a lot of live shows, which is awesome. How did you book those?

Ava G.: A lot are opportunities given to us because of the camp and recently started to get more things.  We got to play a show opening for Tigernite at Hotel Foster and it was a fashion show that raised money for Girls Rock. We got to play Chill on the Hill and we’re going to play the  Rush-Mor Records stage at Bay View Bash on Saturday, Sept. 17 at noon.

Ava G. When we started playing shows, it was a little bit of a change from just playing them to each other during our practices and then to people, and wondering how they will react. But people seem to really like them. So, there’s not really much fear there, wondering how people will take to our songs.

3. Do you have any pre-performance rituals before you take the stage?

We have an order that we go with for all of our shows, for example it starts with a song about new beginnings that kicks it off. We usually end with “Chasing Hopelessly” because we have a really loud ending. We always keep that near the end. It sort of goes from our best beginners to what we’ve made more recently. It’s sort of a thing we’ve decided based on what the songs are like and we stick with it.

4. You have a new album. What was the recording process like?

Ava G.: We got to go to the studio and record all of our songs and I thought it was really fun. We recorded with Lode [Broekhuizen] at a studio in the Milwaukee Building, I always refer to it as the “Ladybug Building.”

Ava A.: It was really fun

Lola: I wasn’t really sure what to expect

Ava G. It was really laid back, we basically played the songs, listened to them, took a break and had cupcakes.

If you go back into the studio again, is there anything you would do differently, now that you have experience?

Ava A.: Nope. I thought the way we did it was awesome

Ava G: We actually fit in more songs than expected. We were told we would probably have enough time to do 3 or 4 songs, but we did 6. I think we did pretty well.

5. What advice would you give other people your age looking to start a band?

Lola: Anyone can be in a band. They might think that they can’t be, but you just have to want to be in a band.

Ava G.: If you want to do it, and you keep working at it then you definitely can. When we started, I had been playing guitar for two weeks. I was not good at all.

Lola: I hadn’t ever played bass before.

Ava G: We just continued. So, even if you’re bad at your instrument you will get better and things will work out.

Ava A.: Unless you give up, which you shouldn’t.

Check out our Community Story with Negative/Positive by clicking the audio player above. Stream their debut album “Lumanescent” below: