You Should Know OQ

You Should Know OQ 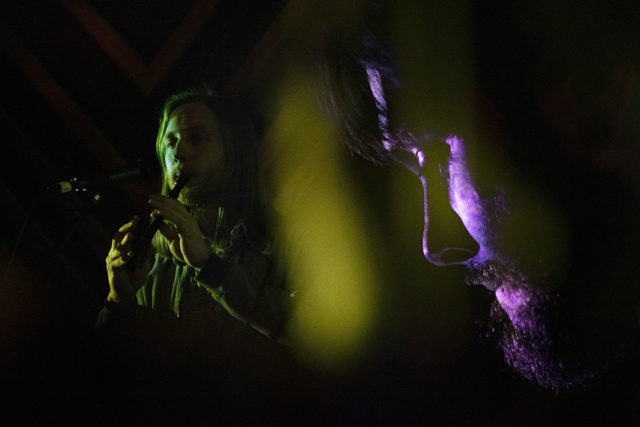 1. Did you grow up in Milwaukee? When did you start making music?

I grew up outside of Milwaukee in Oconomowoc. That’s strangely enough how I met Cole [Quamme]. I grew up with Matt Pappas who is in The Fatty Acids with Cole. I was living in Portland and Matt and the band came out and stayed at the house with me and we hung out. Then, I moved back to Wisconsin after a few years and started the band Holy Sheboygan and we played some shows with Fatty Acids and that’s how this whole thing started.

I was writing music really young. My parents didn’t know what to do with me, neither of them were musicians. My mom had a friend who played for the Milwaukee Symphony, so I started going into Milwaukee for composition lessons when I was 11. My mom is a writer and my dad is a painter and also an engineer. They were artistic, just not musical. I was taking lessons and writing funny, thematic movie-music type stuff. The Milwaukee Symphony ended up playing one of them when I was 14.

2. How did you transition composing for the symphony to the indie-folk of Holy Sheboygan?

I was going to school for composition and by the time I was in school it was less movie music and more minimalist inspired like Philip Glass, Terry Riley, Steve Reich. That led me towards folk music. I love repetition, that stuff all comes out of pop and folk music. I’m always doing music, and it’s always a little different every time. 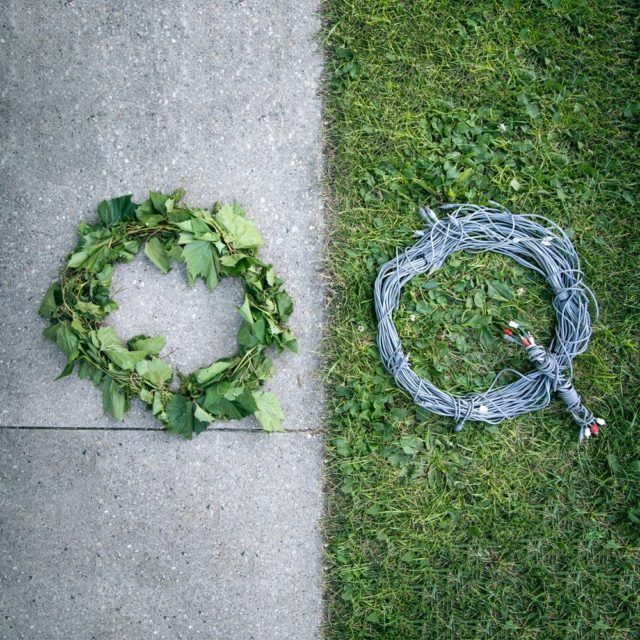 3. Listening to your EP, I feel like your album art does a good job of describing it—equal parts natural/organic and then you have this tangle of electrical cords with cement and grass.

It’s really Cole’s brainchild. Three years ago he started making these world beats and sent it out to a bunch of folk musicians around Milwaukee. It was originally going to be a compilation that he was going to put out as “Cole Quamme.” Everyone else flaked on him. He saw me at a Holy Sheboygan show and said, “I really want you to make a song to these beats.” So I took it home and within a month I sent him a completed song, which was the first song on the record. He was like, “I love this! Now we’ll just wait.” We waited a year. He was my neighbor so I said, “Hey dude, what’s up with that compilation?” He said nobody got back to him. Then we decided to just go for it ourselves. As we got deeper into the process, we realized it was a lot of fun.

The Milwaukee duo OQ was originally meant to be a compilation album dreamed up by a percussionist, until it emerged beyond bedroom recording to become a full-fledged project.

Radio Milwaukee had a chat with vocalist/guitarist/flute player Liam O’Brien to learn more about how OQ is bringing world music and polyrhythmic beats together and how they wrote their debut EP on a worm farm in rural Wisconsin.

Originally used as witchcraft incantations, we were trying to manifest something in all the lyrical content and chanting.

Cole had a lot to do with the conceptual framework, he’s really into this concept of “re-wilding” – which is a vision of the future in which humans have figured their shit out and live with nature in a more wholesome way.

The music that this all derives from is very chant-y. Originally used as witchcraft incantations, we were trying to manifest something in all the lyrical content and chanting.

It’s funny you’re calling me, right now I’m where I was when I wrote all those songs. I’m out at the Worm Farm Institute, a farm in Western Wisconsin. I get the beats from Cole, then I blast them through the speakers, I dance a little, move around. I have instruments around me, play around with what I’m hearing, what’s coming out of the beat, what is the beat speaking to and marry that to an Irish traditional melody. Cole wanted it to be folk-based. I mostly know Irish folk music, so I went with that. Some Dorian, Mixolydian, modal stuff. Then I start mumbling words until the words come out.

I wanted to know a little more about this concept of “rewilding,” so I reached out to Cole as well. Below is his response:

“Rewilding for me is returning to a more wild or self-willed state. Big picture is wild public lands, less big agriculture and stripe malls, and more natural land. Smaller picture is wild food and resources on an individual level. Currently the world will not be able to sustain without relearning the way the earth was in it’s wild state.”

4. You have a lot of collaborators on your EP, how did you perform it live for the release show?

We’d like to take it on the road. I think we’re still dialing it in. The show went really well. There were a couple little things we can change and make better. We haven’t booked any road dates. We’ve been working on this record for two years. Kind of a bedroom project so we thought we’d see what happens when we play it live.

Will it continue as it is or will live performance be on your mind when you go back in the studio?

That’s curious. I think it can’t not be at this point. It’ll be somewhere in our subconscious. Cole is coming up here tomorrow and we’re going to try to knock out the next EP, get all the songs finished with the writing at least. It’s really cold, Wednesday was ridiculous. It was -33 degrees before the windchill. It’s an old building, I’m standing in front of the fire right now.

Can you explain the streaming service “37d03d” (PEOPLE) and how you ended up on that platform?

It’s a little mysterious to me too, but it’s evolving. They are working their way around to everything it could be. It’s very open-source. I was the administrator, so I uploaded and edited everything, they just came back and said, “thanks for doing that!” It’s like Bandcamp in that way, but it’s supposed to promote cross-collaboration. All your friends that collaborate on projects, their name appears in a certain way and you can click on it and see all the other projects they are involved in. I think it’s supposed to encourage cross-collaboration among artists. It also seems like it could evolve into something more like a label. It’s really interesting and pretty nebulous.

And it’s related to the music fest “PEOPLE” in Berlin?

It’s the same “People.” We would love to get involved in that stuff. It’s a great way for us to step out of non-existence.