You Should Know NO/NO (MKE Edition)

You Should Know NO/NO (MKE Edition) 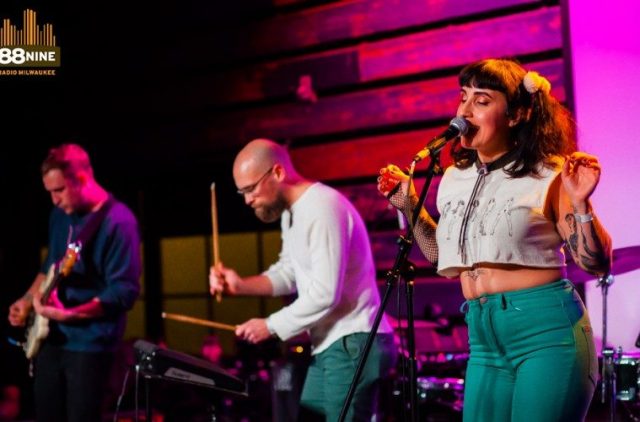 Radio Milwaukee had a few questions for singer and musician, Cat Ries from the band.

An abridged version of the interview originally appeared in Milwaukee Magazine. Read the full interview below:

What are your current musical projects?

I’m still doing stuff with NO/NO, we’ve had a few meetings since the release of our record “Sound and Light” just talking about trajectory, personal goals, each of our individual band goals. There’s talk of different sound, I’ll probably pick up a guitar; which I can play better than I can play keyboard.

Because it’s the instrument I played most when I was younger, I have a raw musical connection with it so it’s easier for me to write songs on the guitar to access that creative energy.

I just got a harmonium so I’ve been playing with that – it sounds really spooky and church-y. That seems more in line with my solo stuff, Pleasure Thief.

Do you remember when you first started making music?

I really loved Beauty and the Beast when I was a kid, my mom took me to see it in the theater. When the Beast transforms into Prince Erik I started crying because I thought the Beast died. I preferred him over the Prince in his animal form, I guess.

I don’t know if I was three back then? I had a toy piano and my mom said I played the first few notes of Tale as Old as Time, the theme from Beauty and the Beast and I said, “Beast! Beast!” That’s when she thought, “my daughter’s a genius!”

Same with guitar, I know the names of some chords and I can really slowly read notes, but it’s easier for me to just play what sounds good. It hinders the creative process a little bit. People that are trained probably say the same thing – we probably want what we don’t have. I could probably teach myself if I really wanted to. I guess I’m just lazy right now.

There was something stopping me because everyone said, 'No, you can’t do it.' David Bowie’s death energetically opened me up in a way that was, 'No, I CAN. If I want to, I can do it.'

Oh, David Bowie HANDS DOWN. Out of all the really important deaths this year, David Bowie’s affected me the most ad it was so surprising. A lot of people probably have a similar story, but with David Bowie’s death I cried more than I’ve cried at a funeral. It sounds bad but it felt like a piece of me changed; transformed in some way.

I’ve always been a fan, I’ve seen the Labyrinth hundreds of times, my mom listened to David Bowie when we were really young. A lot of important things happened with David Bowie as a soundtrack in my life. I knew that much, but I didn’t know how deeply the emotional and spiritual connection went.

When I found out he died, it was 2 in the morning, I had been cleaning my room. I turned off all the lights, I lit a candle, I watched and listened to Lazarus and I just cried uncontrollably. Even the week afterwards I would just start crying.

I realized in my mind, David Bowie so perfectly was able to be a celebrity and a musician. He was unstoppable in his creativity; he did pretty much whatever he wanted to. His managers would say, “David you can’t do that.” And he did it anyway and ended up always being right with his decisions, even if it was strange and continuing to grow as a musician.

Being so prolific, you have to put stuff out in order to have these masterpieces pop out. You can’t just produce a masterpiece after another. So he was an example for me as following your creative passions. People in my life have always been like, “Oh you want to be a musician, you’ll never be able to make that happen and you should just go to business school.”

There has always been that blockage in my creative expression. Even if I, on the surface, was like “no, I love this.” There was something stopping me because everyone said, ‘No, you can’t do it.” David Bowie’s death energetically opened me up in a way that was, ‘No, I CAN. If I want to, I can do it.’

He was into books, movies, fashion and all kinds of music; definitely a voracious media consumer and purveyor of the arts. As an artistic figure, was also supportive of other artists. As a figure of someone you can look up to as someone really sure of themselves and even if there are insecurities are able to speak to them through music, or just be a good barometer of the time. I think he handled fame really well and just being a musical icon.

I don’t know if we’d be good collaborators, I would assume so, but that’s who I would love to spend time with at least.

I’m a caregiver for a woman with dementia. It’s a night shift, so I work from 9 at night to 8 in the morning. I’ve been a nanny for a long time, I’ve worked with kids with autism, but this is pretty different. She has late-stage dementia, so her cognitive abilities have really declined. She can’t talk or move on her own, or eat on her own. It’s a lot of moving her from her bed to her chair, feeding her, changing her and things like that. It’s difficult work, but I really enjoy it. Service and healing and compassionate work is something I think is really important so I feel good doing it.

How would you describe the Milwaukee music scene?

With most things, the things we love also end up being the things we have issues with. With the music scene, on one hand it’s incredibly supportive. Everyone is friends with each other so there is a lot of collaboration and support for shows and things like that. I think it’s incredibly prolific and creative. There are some incredible things happening in Milwaukee and I’m really proud of that. On the other hand, it’s really clique-y and can also be … there is a social hierarchy and people think they are “Milwaukee famous” and gives them a false sense of superiority in the music scene and above other musicians. You don’t have to like a certain music, but you shouldn’t say mean things because you don’t like something. Criticism is different, there is a difference between constructive criticism and just being hateful and judgmental.

That’s one thing I have a problem with. You end up seeing a lot of the same artists on the same bill. Sometimes that’s fine, if there is a particular genre you want to promote, and you do that with a show, that’s great. The more we can be collaborative as a community, the stronger it will be. That goes not just for the music scene, but the community in general. We all want to create and express, and we’re all finding the ways we do that best. To communicate these feelings, these emotions, our opinions on whatever is happening around us in the most effective way that reaches other people.

What’s next for NO/NO?

We have an EP we finished a while ago, but we’re going to record that and release it. I’m really excited, in early December we are going to start shooting the music video for “Whatever.”