A conversation with Angel Olsen

A conversation with Angel Olsen 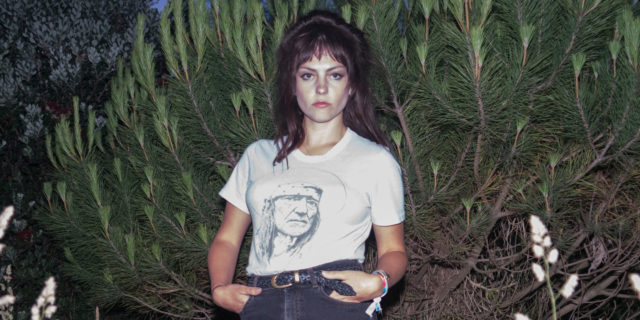 Angel Olsen is emerging as one of the great songwriters of our time. Starting as a singer/songwriter and moving towards bigger and more expansive sounds she has shown that she thrills us to see where she goes next. Olsen just announced a new album, “Phases,” a collection of unreleased songs, demos, b-sides, and one-offs, aims to show the phases of her career thus far. She will be performing songs off of all of her albums and “Phases” this Sunday, October 1st, at the Pabst Theater.

Here she talks to Justin Barney about memories in Milwaukee, her artistic phases, and reluctantly loving Patti Smith.

Listen to the raw, unedited interview below, or read the abridged version here.

Justin Barney : Angel, I can’t wait to see you again. You’ve been here a couple times before, do you have any memories of being in Milwaukee at all?

Angel Olsen : Last time we were there, we went along the lake the next day. Being from Chicago, it’s sort of the thing to do.

Justin Barney : It’s funny because in Milwaukee we go down to Chicago all time, but it seems so rare for people in Chicago to come up here.

Angel Olsen : Yeah it’s weird to me because I would come up there a lot when I lived in Chicago. I would go to record stores and stuff, and have a day trip. I also remember to going to some movie theater. It was like an outdoor theater on the way to Milwaukee.

Justin Barney : There also used to be an adult outdoor theater back in the day, on the way as well.

Angel Olsen :  Well I didn’t know about that one. Had I known, maybe I would’ve gone there.

Justin Barney : Alright, so you just announced a new album you’ve got coming out called, “Phases.” Could you tell me a little bit about that?

Angel Olsen : It’s sort of a collection of some B-sides, rare unreleased demos, and some covers that I’ve done over the years.

Angel Olsen : I wanted to remind myself of where I started, and the different phases of my career.

Justin Barney : What have been some of the phases of your career then?

Angel Olsen : Well I started off solo, and not playing very many shows. I remember working with Will Oldham, and while I was doing that I came out with a tape called, “Strange Cacti.”

Then I did some solo tours in the U.S. and Europe, and went from that to being in a three-piece, a four-piece, and then on this record a five-piece band.

I remember a time when I couldn’t have ever imagined my career being where it is now. That’s been a lot of the learning, and just navigating different kinds of personalities, and figuring out what people view as a good show. When I played solo, I would sometimes not even make a set list and kind of play randomly. There were a couple shows back then where I was like, “I wonder if I already played that song… Am I playing that song again?!” It’s been a journey.

I remember a time when I couldn’t have ever imagined my career being where it is now.

Justin Barney : One of the things loved about your last album, “My Woman” and the new single, “Special” is the length. I love the seven to eight minute song. Do you think that’s because you were working with others, or is that something you’ve just been wanting to do?

Angel Olsen :  I’m still very focused on the writing part of it, and I definitely like playing the fast upbeat songs, but I also really like getting lost in it, and I think the longer songs allow for that more.

Justin Barney : Now that we’re talking about preforming and writing, what part of making music do you enjoy more? The preforming, or the writing?

Angel Olsen : I like both but it’s a very different experience. When you’re writing it, especially being at home and finishing a song, there’s nothing compared to that feeling. Then when you have to work on it and translate it to people, that changes its form, and when you’re in the studio it changes again, and then by the time you’ve preformed it for a year and a half, it’s changed yet again.

Angel Olsen : Yeah but I feel like that’s easy because I can visualize the scene when I’m writing, so I’ve already thought about it for a little bit. All I’m really doing there is applying my vision to it in that way. It’s my way of putting my stamp on it and saying, “This is 100% me.”

Justin Barney : What are you reading right now, or do you start a new book when you are going on tour?

Angel Olsen : I just got this book called, History by Elsa Morante, who evidently was one of the main inspirations for the “Neapolitan” series that just came out over the last four or five years. It’s pretty dense at first, as it goes through history from World War I, until the end of World War II before beginning the narrative.

Then when I was on tour I finished, Just Kids by Patti Smith.

I was finally like everyone pushed Patti Smith on me over the years and I’m like okay.

Even if you don’t know her work, it’s just a really good book. It’s about growing up in New York in the 1970’s, and what it meant to be a bohemian struggling artist at that time. It’s funny, but there’s also a lot of serious stuff that happens in it, and she sort of spends her life with this specific person who is her best friend, lover, and muse. It’s really special.

Justin Barney : I’ll definitely have to pick that up. Well thank you for doing this with me, and I’ll see you on Sunday. Can’t wait for the show.