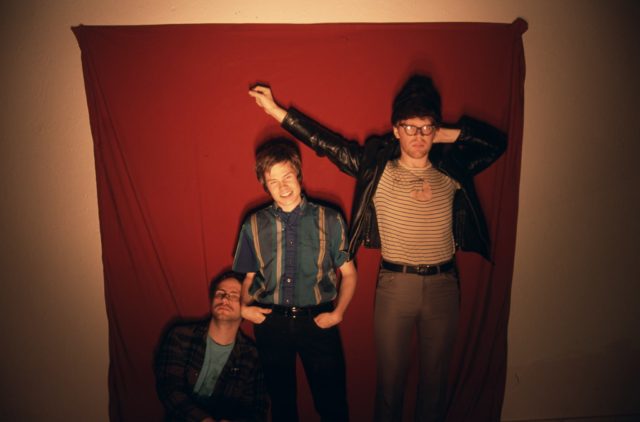 Wisconsin-based Tenement has received a slew of national reviews on the release of its double-LP “Predatory Headlights” in 2015 from New York Times, Spin Magazine, Washington Post and many more. Recently, the band received a unique set of reviews from an 8th grade English class in Nablus, Palestine. It’s a refreshing take on music criticism — these students don’t drop a single band name.

Radio Milwaukee recently caught up with Tenement’s frontman Amos Pitsch to ask him about the experience of receiving reviews from national music journals, and his thoughts on critique from foreign students who don’t have much previous exposure to American music.

Tenement has been written up by a lot of national publications, what do you typically think of reviews?

Hmm, I’m generally really fascinated with reviews of my own music. I don’t feel upset by criticism at all unless it’s either a poorly informed or ignorant opinion presented by someone who’s supposed to be an authority on music; i.e., a paid writer for a large music publication that should have a large breadth of knowledge about the style of music they’re reviewing.

I thought the reviews that the children from Palestine wrote were really interesting in that the ones that you could tell really put some thought into it observed many things that are there, but not a single writer that professionally wrote about the record bothered to comment on. Such as the emulation of bees in the string sections of “Hive of Hives,” or the particular dynamics of the songs and how they affected the listener emotionally.

They commented on specific sounds and what they thought they might depict. Such as the three bells that represented a “ghost city.” Most professional writers in America are too hung up on what other groups or musicians they should compare the music to, to really think that creatively about the music at hand.

The music is kind of scary and doesn’t really make you relax because it doesn’t have any words. Also, at the end of the song, there goes the sound of three bells, and that makes me think of a ghost city.

What do you think of the perspective of these student reviews?

Something that really struck me was that many of the students commented on the string sections of the songs as “creepy” or “freaky” and I thought that was really interesting, as it had never crossed my mind before.

When the reviews were sent to me, they were sent with the disclaimer from Mr. Alex: “The kids who wrote the reviews are really great kids, but have some very strange musical taste, most listen to Palestinian Dubkeh, or Egyptian and Lebanese Pop, so your music was a bit strange and foreign to some of them.”

So it was interesting to observe that these children didn’t grow up culturally with American pop or rock music and they were writing these reviews from the same perspective that perhaps an American teenager might write a review about a more culturally traditional group from a place like say… Russia, or Turkey.

Listen to “Predatory Headlights” below: