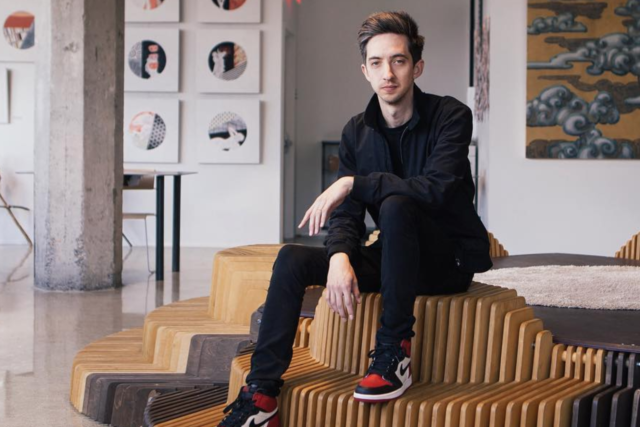 Cole Cuchna learned how to dissect music in college studying music composition. Though before he was getting a formal music education, he was a self-taught contemporary musician, playing and writing rock and electronic songs since he was 13. 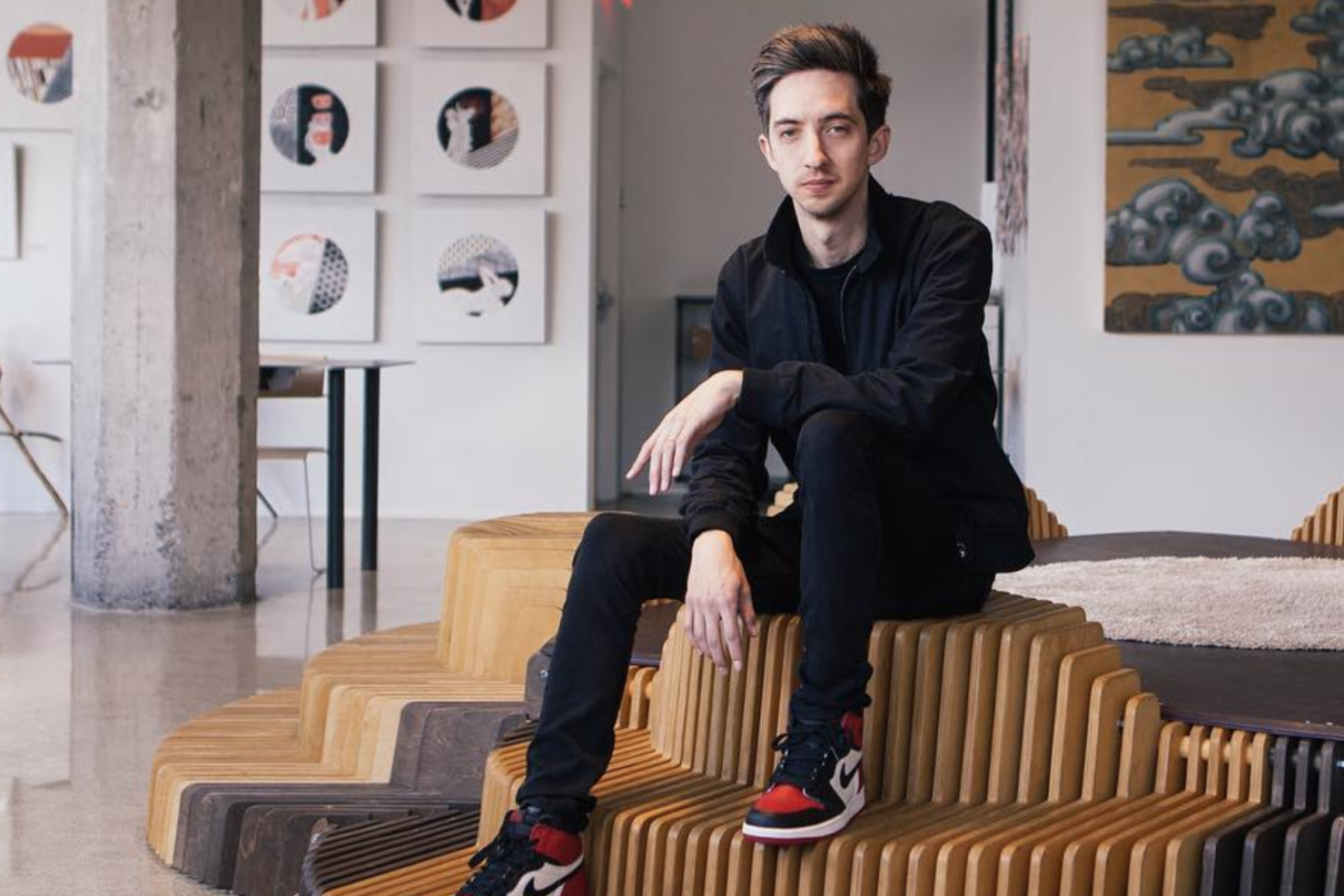 “What I didn’t like about [my educational] experience was that the world of contemporary music and the world of classical music in college were so separated. I was like, ‘There’s gotta be a way to combine them somehow.'”

That idea was lingering in his head around the same time “To Pimp a Butterfly” came out.

“I actually sat down and studied it like I used to study Beethoven in college. Like you’d sit down and read about it—you know, the composer, the history—you’d read about the piece. So I developed this kind of process: I was like, ‘What if I applied this classical, more formal process to ‘To Pimp A Butterfly?'”

This was also around the same time Cuchna started listening to podcasts. So, with about 30 hours of research per episode, a written analysis paper for each and some recording equipment, he published a podcast on Kendrick Lamar’s third studio album.

If you haven’t heard of Cole Cuchna’s serialized music podcast “Dissect” yet, you’ve definitely heard the music of its subject matter—though this show will change the way you listen to it. Season one analyzes “To Pimp a Butterfly” by Kendrick Lamar, season two tackles “My Beautiful Dark Twisted Fantasy” by Kanye West and season three dissects “Blond(e)” and “Channel Orange” by Frank Ocean.

And Cuchna, the show’s host, doesn’t use the word “dissect” lightly. He has just wrapped up season three after 22 episodes, 14.5 hours of total run time and 435 MLA formatted pages of analysis on Frank Ocean’s most recent work.

You might not consider these albums new, but relative to Beethoven they are. That’s the kind of classical musician that Cole Cuchna was used to writing research papers about until “Dissect.”

Fast forward to this summer, in honor of Milwaukee’s Hip-Hop Week, Cuchna traveled to our studios to host a live conversation about Kendrick Lamar’s “To Pimp a Butterfly.” Before the event, we talked to him about the first season of his podcast which discussed the same album. He told us about his research methods and the cultural significance of the albums he’s analyzed so far.

Some people might not agree with a white person dissecting and then explaining his story, but hopefully when they actually listen to it, they find out it actually is coming from a place of honesty and genuine curiosity.

Season one of “Dissect” is 22 episodes of Cole Cuchna’s scripted researched interpretation of the 16 songs on Kendrick Lamar’s “To Pimp a Butterfly.” But way before he even starts talking about the first track on this album, Cuchna spends two whole episodes giving background on Kendrick Lamar Duckworth, from living in Compton, to becoming K Dot the mixtape rapper, to evolving into the artist who recorded “good kid, m.A.A.d. city.” The rest of the season discusses each song on “To Pimp a Butterfly” for at least 20 minutes each, going line-by-line.

“I go in weightless,” he says. “The music and the lyrics take me wherever, blow me wherever it wants to go. So if [Lamar] says a line like ’40 acres and a mule,’ I’m like ‘Oh, what is the history behind that line?’ And then that’s a rabbit hole that I’ll dig into…”

Cuchna’s approach is rigorous to say the least. Though if you weren’t familiar with his scholarly approach, you might not think that he looks like any authority to be interpreting a concept album central to black identity and experiences in America.

“That was a big insecurity especially in season one,” he says. “Kendrick and this album particularly are so rooted in black culture and someone in poverty. I felt like I could either run from it—choose ignorance because I felt like it wasn’t my place to learn or tell—or the flip side. I had actually written about it. It was supposed to be in episode one, something addressing that but I ended up taking it out.”

Instead of giving a disclaimer, he hopes his research speaks for itself.

“Some people might not agree with a white person dissecting and then explaining his story, but hopefully when they actually listen to it, they find out it actually is coming from a place of honesty and genuine curiosity. I don’t have any regrets because it changed me and it connected me more to not only Kendrick’s story, but to so many people’s stories in the world that I literally had no clue about before, or at least not to the depth I do now.”

Cuchna concluded: Why not him?

I couldn’t really insert myself or story into Beethoven that happened so many years ago. There’s no way I can insert myself into that story, so I try to take the same approach with these artists that I actually feel are contemporary Beethovens.

Even though he says “To Pimp a Butterfly” has changed his life significantly, those are the parts he doesn’t put into episodes of “Dissect.”

“What I do put in is grounded by either research or is self-evident. The biggest thing is that I don’t want to put words in their mouth. If I’m not entirely sure I would say, ‘It seems like he’s trying to express this’ or put some kind of buffer there. So there are some things I say very declaratively because I’ve done the research on the certain topic, that this is what he’s talking about. I’m not talking to these artists, so it is going to be my interpretation, but it’s grounded on a lot of research so I feel confident in saying it.”

“I couldn’t really insert myself or story into Beethoven that happened so many years ago. There’s no way I can insert myself into that story, so I try to take the same approach with these artists that I actually feel are contemporary Beethovens. It’s kind of an appreciation. Like these are our artists that are going to be remembered. So I try to approach them while they’re still here and while they’re still relevant, rather than you know, in 30 years.”

As far as the next “contemporary Beethoven” he’ll focus on in season four, he says he has a lot of ideas.

“If Beyoncé ever puts “Lemonade” on Spotify I’d love to do that, but unfortunately it doesn’t make sense for me to because I’m working for Spotify. So hopefully one day she’ll do that and I can do it. ‘The Miseducation of Lauryn Hill’ is one I’d love to do. I also love Radiohead, so if I ever like went another direction, that would definitely be at the top of that list.”

There are so many albums that are great, historic or that have influenced many generations, but Cuchna says he thinks it’s a “philosophic choice” at this point to keep exploring hip-hop.

“Right now, I’ve kind of found the right niche to dissect urban music and hip-hop, especially because they don’t get this kind of treatment a lot, where someone like Radiohead already does. There are books that analyze Radiohead, there are college classes—it’s already been done. So I think there’s something special about hip-hop this way.”

As the podcast’s website says, “great art deserves more than a swipe.”

“I don’t just listen to hip-hop,” Cuchna says. “But I feel like it’s probably the most under-appreciated in terms of classical analysis, like academically. You’re starting to see it—Kendrick won the Pulitzer prize. It’s a little late but I want to be a part of that movement that sees this music as an art form. And that’s what I’m most passionate about, is art.”