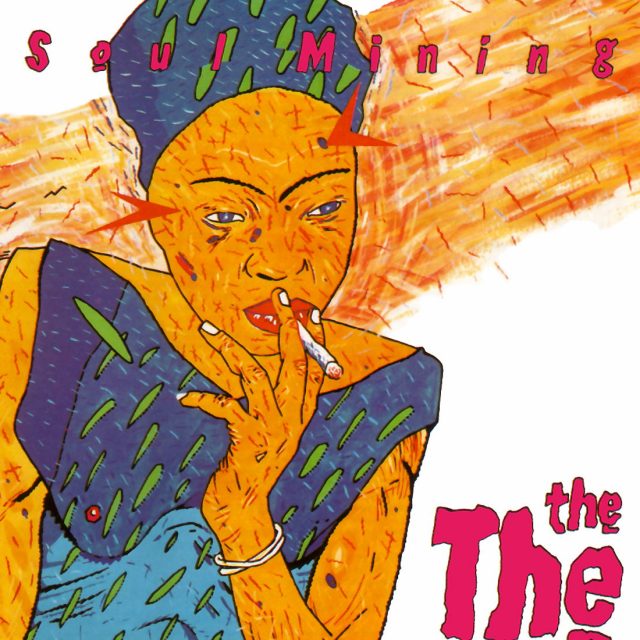 August 1988, Iowa City, IA. My freshman year in college. At once it was one of the most exciting times of my life: college, making adult decisions, living in a new place, meeting new people, higher learning but also isolating in that I was away from my family and friends for the first time; it was new chapter in life, closing the previous chapter(s). What you don’t really realize at the time with the newness of college, is that you can never go back to that world you just left, ever. I needed a musical panacea. My friend Scott had just the album, The The’s 1983 album “Soul Mining.”

Soul Mining is—amazingly—the debut album from Matt Johnson’s The The. (While his 1981 album ‘Burning Blue Soul’ would be retroactively attributed to The The, it was originally released under Matt Johnson’s name.) And what a singular accomplishment it was and remains, 30+ years later. Matt Johnson manages to mix warm emotions with anxious and sad ones alongside warm instruments and (at times) icy synths. The album employs a cast of 14 musicians with Johnson playing multiple roles on every song.

Opening with the “I’ve Been Waiting For Tomorrow (All My Life)” with Johnson singing over a tense drum part, with synths slowly joining in, ratcheting up the tension, the songs build to an anxious climax, setting up the album in dramatic fashion. This is a good introduction to the album and certainly one that grabs the listeners attention.

Second track, “This Is The Day”, is the polar opposite emotionally, with the main melody warmly played on accordion and some violin. And while the opening line “You didn’t wake up this morning because you didn’t go to bed/You were watching the whites or your eyes turn red” exhibits more anxiety, the overall mood is more optimistic, with the chorus: “This is the day, your life will surely change/This is the day when things fall into place”. It became a staple ‘wedding song’ for a lot of people.

“The Sinking Feeling” plunges our narrator back into unease and despair. “You can’t destroy your problems, by destroying yourself/Death is not the answer, for your soul will burn in hell.” Some organ lightens the mood toward the end but overall it’s another self-discovery song with heaping dollops of self-doubt.

With the yin and yang of this album, we find ourselves once again in a warm place, albeit one with minor key overtones. “Uncertain Smile” was the first song written for the album, coming out as a single a full year before the album in a different arrangement. The flute and sax on the single was replaced by a virtuoso piano solo from Jools Holland on the Soul Mining version of the song. The warm opening marimba part yields to the yearning chorus: “I’ve got you under my skin, where the rain can’t get in/But if the sweat pours out, just shout, I’ll try to swim and pull you out” giving hope amid the uncertainty. And where the original sax and flute solo lent the track a bit more melancholy, the piano solo on this album version provided a much-needed levity.

We leap back into unease and doubt with “The Twilight Hour” with pizzicato strings punctuating lines like, “But your waiting for the phone to ring/
Your gonna tell her exactly what you think/You practice getting your mouth around the words that explain the way you feel” The narrator is relying on this woman for his independence and that’s clearly not working out.

Things don’t get any happier on the title track “Soul Mining” in fact the narrator seems to have reached acceptance, “Something always goes wrong when things are going right…Someone captured your heart, like a thief in the night/And squeezed all juice out until it ran dry.”

The lessons learned up to this point culminate in the epic length “Giant” in the chorus: “How can anyone know me/If I don’t even know myself?” Then the lyrics dissolve into a massive group chant, which still carries the overall melody of the song. It’s as if the narrator threw in the towel and decided to just give himself to the moment of this chant, as if to let it wash over him and let the healing begin.

So, we could take “Giant” as the final statement of the record, unless you have the American CD version that came out in 1987 (the version I first bought) which also contained one final song, “Perfect”. If you view Soul Mining as a singular statement made over the course of seven cohesive songs, perhaps seen as happening in one warm summer evening, then that’s where the album should end. Since all subsequent pressings of the album have omitted the song, that’s what Matt Johnson was thinking. He was irked by the song’s inclusion on Soul Mining in the first place.

Or you could look as “Perfect” as the ‘day after’, or with the setting being ‘English Winter” maybe a postscript after getting some perspective after some time passing. It was recorded before the rest of the album (like Uncertain Smile) and lyrically doesn’t really fit cleanly into the album’s arc. Whether or not you choose to see this album as a cohesive thread and story, or simply a collection of incredibly crafted songs is up to you, but it most certainly is a crucial, if underrated album from the early 1980’s. If you’ve not heard the record, change that.