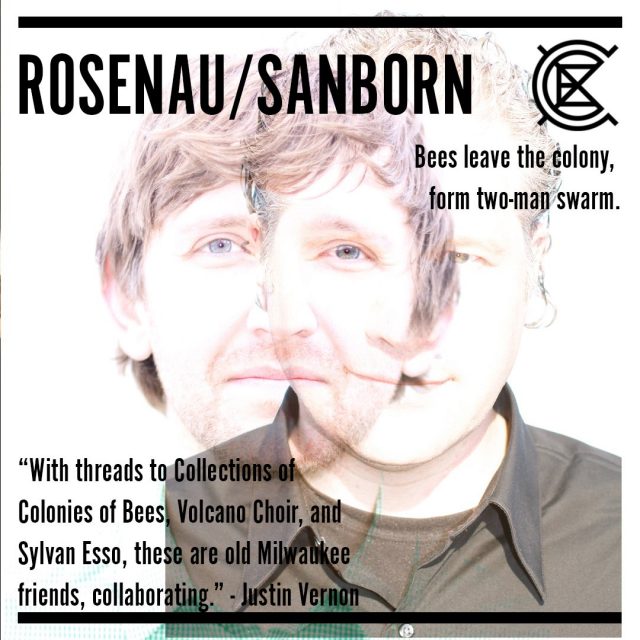 Hi there. First off, can you introduce yourself?

I’m Chris Rosenau, I’ll be performing at the Eaux Claires festival on the 12th of August with my long time friend and collaborator, Nick Sanborn.

I have played guitar forever. I am in a band called Collections of Colonies of Bees and also a band called Volcano Choir. I’m going to play acoustic, but through all of this stuff, for this performance.

We have a lot of technology we have to sort out, so we’ll get that up and running and kind of wing it…an 'informed improvisation.' That’s the idea.

Your performance at Eaux Claires is billed as Rosenau/Sanborn. What can we expect from the project?

It’s a project, but I think it’s really specifically for the Eaux Claires festival this year. Nick Sanborn from Sylvan Esso and I had done a really small improv set spur of the moment last year at Eaux Claires and really had a good time with it, we had a lot of fun and everyone seemed to enjoy it.

We were at the fest when the fest was ending and we were talking to Justin [Vernon] and Michael Brown and said, “hey we’d love to do this other thing next year.” We were probably the first act booked for 2016.

This year is going to be pretty much and extension of last year. There will be a lot of improvisation, but we are getting together to rehearse in Milwaukee a couple days before the fest. We have a lot of technology we have to sort out, so we’ll get that up and running and kind of wing it…an “informed improvisation.” That’s the idea.

I think the reason we are getting together beforehand is so hopefully all of that tech becomes invisible. The idea is not to show off all of this stuff we have connected to each other, the idea is to have a seamless kind of thing so the music can happen without us having to think too much about what buttons to push or what pedals to hit to have it happen.

That’s what Eaux Claires seems like in general – from the installation to performance, it’s unique to the place and time.

I think that’s the idea, they want to differentiate themselves in a number of ways, not just a really structured festival. I mean, there is part of that, but there are all sorts of other things going on at the same time. And they want to foster this creativity and these one-off collaborations to make it special for everybody.

Man, those guys have really gone out of their way to make this a very different vibe. Yes, they get great bands and it’s very eclectic – there is not just one type of music. There’s that aspect, there’s all of the bands collaborating – you’re going to see stuff that you’re never going to see anywhere else and you don’t even know what you’re going to see half the time.

They have two huge stages for the really big acts to get everybody in there. Last year, there is this main festival ground, and then you can walk through the woods to this other clearing where they had all these other performance spaces and stages. People were sitting with people, people were walking around playing music, there is just always stuff going on.

And then there is the whole aspect of how they treat the attendees as far as having really good food, really good resources and just making it so it’s really easy for people to have a good time. It’s kind of crazy because last year was the inaugural year and as far as I know it went off very smoothly, I think it’s just going to go smoother going forward.

The fest allows the people to become a participant…

Yes, that’s true. When Sam Amidon was walking around with all kinds of players last year, I know the Dessner (The National) brothers were walking around and you’re not so much an attendee, but a participant.

They have installations everywhere and it kind of changes. There are some during the day and some at night and they had a thing last year where there was an app you could follow through and all sorts of cool stuff that makes you more part of it as opposed to buying your ticket, going to this stage at this time. You can kind of get lost, wander around and cool stuff to see and great people doing great stuff.