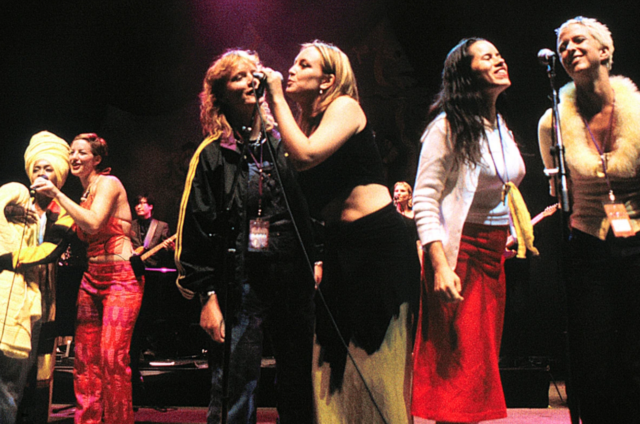 Dori and I take a journey with the artists of Lilith Fair below.

I’ve worked at Radio Milwaukee for eight years and in radio for 26 years. My current role is as Traffic and Compliance Manager, which is a behind-the-scenes job where I schedule all the things that go on the air besides the music, such as contests, underwriting messages and station promotions. I also spend a lot of time explaining that I am not Dori. We have been waiting for a chance to be on the air together, and this was such fun! In the future, I’ll be on-air Sundays from 6am-9am.

My theme for International Women’s Day this year is Lilith Fair, which was a traveling tour from 1997 to 1999. Lilith Fair was started by Sarah McLachlan because she couldn’t get concert promoters to put her on a bill with other female performers because they claimed tickets wouldn’t sell. So she put together a tour of all women, and it was the highest grossing festival tour in 1997. Lilith Fair came to Milwaukee, always in August at the Marcus Amphitheater. I missed the first year because I was at the Reading Festival in England but I was delighted to be there in 1998.

In those same years I worked at a great radio station here in Milwaukee called The Point (106.9 FM WXPT and later WPNT). I was part of the station before it even launched and was part of the on-air staff and office staff there. I loved it, and when Lilith Fair began, it was a great fit with the artists we played.

If you want to learn a ton more about Lilith Fair beyond what we chat about, I highly recommend this article that hears from the founders and participants, looking back 20 years later.

Here are some favorite songs by my favorite Lilith Fair artists that I played while hanging out with Dori: