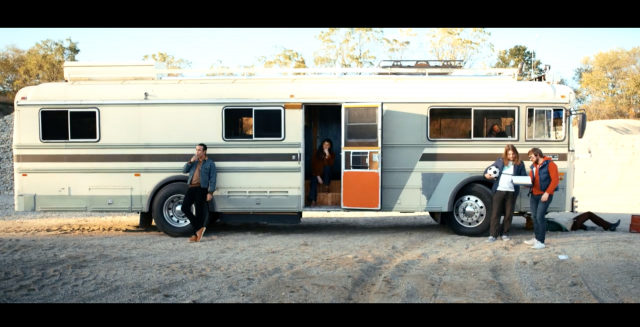 Milwaukee’s GOOLLDD premiered a new music video this morning for the single “Undercovers” in advance of their performance this Friday at Turner Hall. Tickets and more info on the show here: www.pabsttheater.org/show/ggoolldd2016-2

With a throwback vibe from the ’70s/’80s with a nod to “Stranger Things and Scooby-Doo,” the band finds itself in a nightmare scenario when their mobile home/tour bus breaks down in the middle of nowhere. Watch the short, which singer Margaret Butler calls a “short fun slasher film!”

Watch the video below with a few words from the director:

From a recent press release, “[The video] was shot in early October in Southern Wisconsin near a small town called Clinton. The actual property where the video was shot for the most part was a late 19th century farm. The shoot itself took place in a 36 hour time window, featuring a 1974 Bluebird Wonderlodge RV as the centerpiece. The band did all of their own stunts and played an important role in the creation of the concept. Additionally, Margaret Butler of GGOOLLDD handled wardrobe and production design, crafting a 70’s/80’s feel throughout the music video. The entire production pre through post was handled by the company S.C Pictures based out of Appleton, WI (www.sc.pictures) consisting of two members Savannah Ziemann and Conor Tarnowski.”

Radio Milwaukee had a few questions for director Conor Tarnowski.

How did you connect with the band?
The co-director of the music video, Savi [Ziemann], who also happens to be my girlfriend and GGOOLLDD guitarist Nick’s sister, introduced me to Nick and Margaret about a year and a half ago. They saw some of the photography I was doing at the time and asked me to help out at  the Turner Hall Show last year, which was incredible and yielded some awesome work which we were both really proud of. From there we all worked together a ton on the photography side, and finally made the transition to making something a little bigger, this music video.
What inspired the concept?
The band got us hooked on Stranger Things when it first came out and mentioned making a music video for a new song they were releasing with some similar theatrics. Margaret and I met up to talk about a couple ideas and finally came up with a creepy hybrid of Stranger Things and Scooby Doo. From there we elaborated on the idea and turned it into a short film rather than your average music video.

Watch the short film for GGOOLLDD “Undercovers” below: