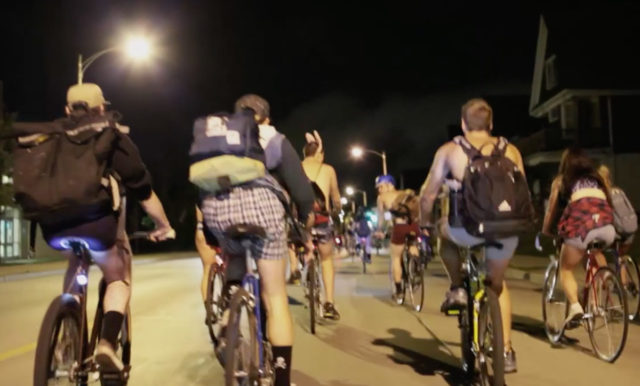 Listen to a track from the forthcoming Tribe Uncovered Album

This Thursday will the 8th anniversary of the Milwaukee Underwear Bike Rides.   The mission of the bike rides is to promote a positive self-body image and to have fun.

The first ride of the summer will take place this Thursday (June 15) at the top of Reservoir Hill at 7 pm.  The ride begins at 8 pm sharp. After every bike ride, there will be an afterparty organized by their new partner, VoodooHoney founded by Foreign Goods founder Jay Anderson.  The first after party will be an album release show for the  A Tribe Called Quest reinterpretation concert called Tribe Uncovered recorded live at Turner Hall earlier this year.  Tribe Uncovered was curated by Klassik and featured some of the cities best musicians and MC’s.

“It made sense to collaborate with VoodooHoney on this. Foreign Goods played its first public show at the Milwaukee Underwear Bike Ride two years ago,” say Roche.  “I’ve known Jay for years and love the music and the work he’s doing in the city. But I was really inspired when I saw the Tribe show back in January and that’s when we started talking about working together. I was a concert promoter for years and this is a great way to tap into that experience.”

The Tribe Uncovered album release and Underwear Bike Ride after party will take place at Company Brewing in Riverwest following the ride.  The afterparty will be curated by Klassik and feature Foreign Goods + Lorde @Fredd33.  The cost of the party is $10.

You can listen to a track from the album below.

“We are in need of mainly men’s clothes and larger size women’s clothes. We ask that they are gently used, clean, and appropriate for teenagers/young adults. If you are looking for other things we need as donations, we are also in desperate need of men’s boxers / women’s underwear, socks, bras, white t-shirts and men’s white undershirts.”

Both newcomers and seasoned pros are urged to be safe, wear protective headgear and lights, and to check this web page for more details.

"You Are Beautiful" - Milwaukee Underwear Bike Ride from Matthew Mixon on Vimeo.