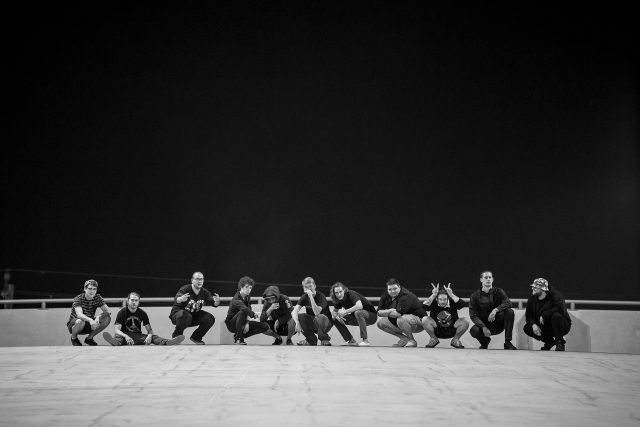 The scene is about to get a lot bigger in one big drop thanks to a new collective of DJs, and producers by the name of Noh Life. The collective was founded by Rick Heard, Vince Rexroat, and Miltown Beatdown finalist and RadioMilwaukee Music Awards performer/nominee Strehlow.  The collective also include a photographer.  Noh Life is not content at just making music, but they want to invade all aspects art, fashion and design. The term “Noh” comes from Japan, which means “skill” or “talent” and this collective definitely possesses both.

I wanted to know more about Noh Life collective, so I asked one of the founders, Strehlow a few questions about their mission and their future.  He also gave me a Noh Life sampler to share with you to download featuring music from all of the artists.  Be on look out for Noh Life collaborations with RadioMilwaukee Music Awards nominees Webster X and Bliss&Alice.

What is the concept/vision behind Noh Life and why was it created? Whose Idea was Noh Life?

We’re all friends, and we all make music. Noh Life was created to show that we all appreciate and acknowledge each members work. All of us always go to each others shows and hang out on the regular, the crew sort of made itself. From our view, there are plenty of people making moves for our music scene, but no forward thinking crews creating new content themselves. The founders are Cristian Strehlow, Rick Herd, and Vince Rexroat.

Every crew member has their own style, but we all appreciate people trying new things. There’s definitely a strong hip hop influence in most of our styles, but we’re open to any style of music.

Who is part of the roster, and how did you all meet?  Are all of you based in Milwaukee?

On our roster we currently have Bokken, Dehku, Efkay, Fooki Wonton, IanEwing, Noer the Boy, Mr Gat, Staron, Strehlow, and Thangster. We’ve all been friends for years with the exception of Ian and Bokken, but they’ve been brothers since the first time they met everyone. As of right now we’re all based out of Milwaukee.

Is your roster all producers? Are there singers, rappers,etc.? If not, are there plans to bring different types of artist into the fold?

So far, we’re a pretty tight knit family. As of now we have 8 producers, 2 DJs, and a Photographer. We’re definitely open to getting some rappers/singers involved but we only have a few people we’ve talked to.

What is No Life plan in next 12 months? proper releases? if so, who and when?

We only just created the Soundcloud and Facebook recently and we’re very excited about the reaction we’ve already seen. For the next 12 months we have a lot planned! We want to throw different style parties in unique locations around the city, make clothing, and continue to release music. We don’t plan on putting our songs out on itunes or amazon or anything like that. We want our music to remain free, or if the artist prefers, to name his/her own price. The way music is released has changed. If you spend an hour on soundcloud you can find dozens of amazing songs that you can just click one button to download, and that’s the sort of outlet we want to become.

Thoughts of the current electronic scene in Milwaukee?

Milwaukee has two different types of electronic scene. The “club” scene which we don’t really associate ourselves with, and the “PLUR” scene, which we also do not associate with. There are some good people buried throughout our scene but overall we are extremely unimpressed. We plan to help bring the change that is needed around here.

Can you explain the concept behind the ‘asian characters’

The asian characters are fun. Unfortunately they’ve become a bit overplayed with the recent surge of “y2k internet kawaii-kid” collectives, but we like to use them still, and its great for certain song names. People can recognize it quickly in their playlists, and often don’t understand what it says, therefore the song has no name. A song without a name leaves it open for any sort of interpretation, it can mean anything to someone. It could be a break-up song, or a feel better song, it isn’t locked to whatever it’s named.

We’re open to work with anyone we feel is talented, there isn’t anyone “outside our genre” we want people we work with to be considered different. Without revealing too much, or announcing anything too early, we have some collaborations and ideas in the works with some of our favorite local rappers. Keep your eyes on Bliss & Alice, IshDARR, & Websterx in the near future for sure!

Where can folks see you perform in the city?

Every first Friday of the month we host a party at Bad Genie. We have several of our own artists playing each month, and plan to start featuring our producer friends from around the country. Starting with December we have our buddies the World Class Art Thieves coming in from MPLS to play.

Do you see Noh Life expand beyond into other genres, like Flying Lotus’ Brainfeeder

We don’t like to limit ourselves by genre so the future is open to anything. We plan on working with all sorts of different types of artists. I think the hip hop element will always be present, but not to where it holds us back. We want to have more than just the “hip hop” fans, or just the “edm” fans. At our shows or parties we want to see all different types of crowds enjoying the music together.

Are there any big plans we can expect to see or hear from Noh Life in next few months?

One aspect of Noh Life that we are excited to bring forward will be artist designed apparel. We have logo tees coming soon, but plan on working up our own mini line with some shirts, hats, hoodies, and other goodies. We’re also really looking forward to starting some new monthly residencies, working with some previously mentioned artists, and getting our radio show up and running. We have so many big plans, many of which are already in motion, we’re extremely excited to see what the future holds for all of our crew members.

You can catch the Noh Life Collective perform at Bad Genie every first Friday of the month.