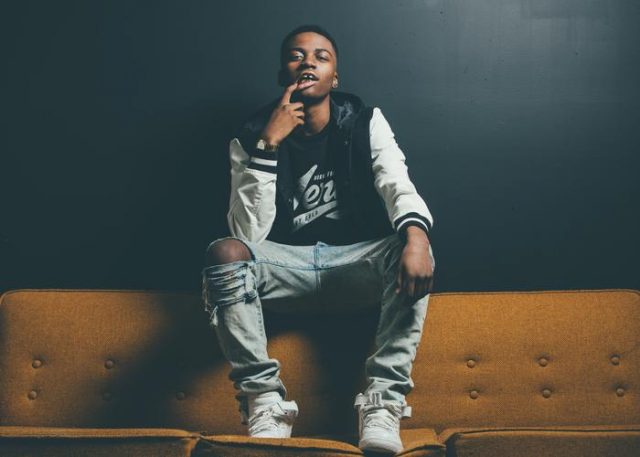 Last weekend, I was fortunate enough to meet up with Milwaukee Emcee, IshDARR. The young hip-hop artist had just turned eighteen and was about to open for Saba, Alex Wiley, and Allen Kingdom, at the Cobra Lounge in Chicago. The performance was one of the many after parties that occurred in the wake of the North Coast Music Festival.

Darr’s first major release, The Better Life EP, came out this April. At this time he was only Seventeen. On August 25th, Darr released a video compilation that features parts of all songs from The Better Life EP. It also features many notable Milwaukee scenes, so be sure to check it out!

I was quickly informed  that this would only be Darr’s 10th live performance. Despite being a newcomer to the Milwaukee hip-hop scene, Darr has already managed to garner a lot of attention.  His confidence and sense of direction was palpable. I have a feeling Milwaukee is just beginning to see what this young artist can do. You can find the full interview below!

Why did you start rapping?

There are a lot of reasons. I always played around rhyming with friends, free styling. Every time I  free styled they would say, “yo, you got the best freestyle you gotta keep going with it, keep going with it.”  I never took it really seriously, but then I got in high school and formed a group. I was writing heavily in eighth grade, so when I got to high school I formed a group with Mag and three or four other guys. I was the freshman in the group. They were all juniors or seniors. It was crazy being the youngest in the group. At the time I was fifteen and everyone else was seventeen. From that point, on I listened to what they said and just kept going.

How did it feel rapping with kids that were older?

I was always nervous getting on the mic and you can hear it in my old stuff. You can hear how nervous I sounded and how quiet I was. I was scared to go all out in the booth, but they would do it. They were already comfortable with each other. I was the youngest and it felt like it. They were always hyping me up, saying, “ he’s gonna be the one, he’s gonna be the one,” but it was still crazy.

Were you born in Milwaukee?

No, technically I was born in Racine. From there, I moved to Waukegan, IL, for about four or five years. In 3rd grade I moved to Milwaukee and have been here ever since.

Just watching your most recent video, it seems like you have a lot of pride for Milwaukee. Is that true?

That is very true. I take pride in my city. Sometimes I say that’s where I am from, sometimes I don’t. Still, at the end of the day I know that it’s Milwaukee that I’m representing. Until the end, it’s Milwaukee. That’s my city.

We are currently in Chicago. This is a city with an unbelievably rich history when it comes to hip-hop. Milwaukee is not quite as well known. Do you consider Milwaukee to have a strong hip-hop community?

The Milwaukee hip-hop scene is different. Quietly, it’s buzzing. It’s trying to get bigger. We have artist like Vonny Del Fresco, Klassik, and WebsterX. I feel like we’ve got the artists here. We’ve got the potential. We’ve got it all. It’s just, there’s something missing. I think that something that was missing for me was my manager Mag. He was great at promotion and getting my music out there. He was really surpassing a lot of these cats. That is why people are amazed that I have only been rapping for a year. The Milwaukee scene is definitely buzzing and it is growing everyday.

Do you feel like there are good venues in Milwaukee for young rappers?

Yeah, it just depends on what side of town. Venue wise, I know Stone Fly was a good venue for me. Then, there is the Rave. Other than that, we’ve got a lot of art galleries. That is actually where the main performances are.

I was listening to your EP Better Life and I noticed you tend to reference older rappers. Do you tend to be influenced by older styles of rap?

Definitely. I tend to be much more inspired by older rappers. Like I said, my dad grew up listening to all that stuff like Wu-Tang, Tribe Called Quest, Gil Scott, Erykah Badu, and all that stuff. They all had a big influence on me, especially in the Better Life EP. I really wanted the EP to appeal to both crowds, older and newer. I think I did a good job, because a lot of the young cats- they love it and play it a lot, and a lot of the older cats, my dads friends they’re playing it too. So, older hip-hop has had a large influence on me.

If you had to pick one record growing up that really amazed you, which record would it be?

Dang. I’m going to have to say Kriss Kross, Jump. That record caught me and my brother early. We started loving it. I think we started rhyming after that, so i gotta give it to Kriss Kross.

What inspires your writing?

It’s just how you live your life every day, basically. Everybody is going through something in life. It’s a story that they can tell. That only they can tell. It’s just where you’re at, your surroundings, that inspire your writing.

What would you say differentiates rap form other genre’s of music?

There are just so many ways you can take it. For instance, Kanye West, with his newest album, Yeezus. He tried to stick to rapping, but then he went to some alternative sounding stuff. Still, he kept it rap at the end of the day. You can experiment with rap so much. You can take it to Rock. You can slow it down. There is just so much you can do with it.

You are currently an unsigned artist. What would be your dream signing?

I don’t really have a dream signing. To be honest, the goal was never to get signed. I’ve had offers, but I didn’t feel they were the right fit for me. I guess if i had to pick one it would be TDE (Top Dawg Entertainment). I just wanna rock with TDE because Kendrick and all of them. I love that group. Musically, they are perfect. I don’t really have a dream signing, but if I had to pick a favorite label I would go straight to TDE.

What has been your greatest moment as a rising artist, so far?

Probably last night, actually. We dropped a song at 11 PM at night. No one was expecting it.

It was recorded yesterday, too. All of the blogs, in less than 5 hours- without sending it to them, picked it up and wrote dope posts about it. It’s gotten to the level where blogs are really messing with my music. They have enough faith in me now. It’s dope.

Finally, what is a song you can’t stop listening to?

A song that I can’t stop listening to right now is “Tuesday Remix.” It’s by a new artist out of Atlanta, I Love Makonnen feat. Drake. I listened to it ten times in a row. I feel like it timeless. When you first hear it you might wonder what the fuck it is, but then it grows on you. He just keeps saying Tuesday over and over, but eventually you get it and want to sing along.