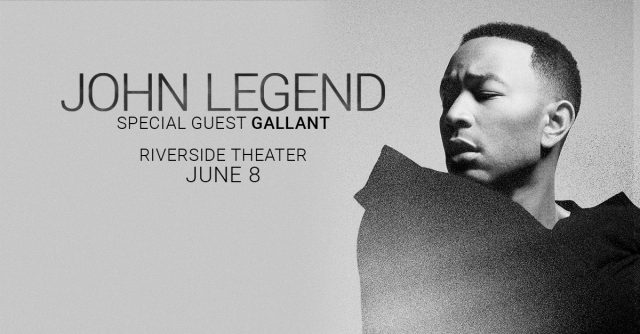 Announced today, John Legend will be performing at The Riverside Theater on June 8. It will be his first show in Milwaukee in four years. Legend recently released his fifth studio album titled “Darkness and Light.”  Rising singer, Gallant will open for Legend.

The tour announces on the heels of Legend’s fifth studio album Darkness and Light, which has received a plethora of critical praise since its December 2nd release on Columbia Records.  USA Today hailed the album as John’s “most personal record” with tracks like “Right By You” which they described as “a heart –tugging rumination on his 7-month old daughter, Luna.”  Time Magazine called the body of work “unflappably classy” while the New York Times said Legend “treats love as something far more complex than a panacea and a fount of perpetual reassurance, with music to match.”  Continuing, the New York Times pointed to the album’s most recent anthemic hit single, “Love Me Now”, which they praised as “a seize the moment song”, that “revolves around an insistent, lo-fi piano figure, and its chorus first arrives with Mr. Legend nearly alone, singing over simple, fading chords”.

Throughout his career, Legend has worked to make a difference in the lives of others. In 2007, he launched the Show Me Campaign (ShowMeCampaign.org), an initiative that focuses on education as a key to break the cycle of poverty. The 2010 BET Humanitarian of the Year award, the 2009 CARE Humanitarian Award for Global Change, the 2009 Bishop John T. Walker Distinguished Humanitarian Service Award from Africare and the 2011 Harvard Foundation Artist of the Year Award recognize Legend’s efforts and leadership in this arena.

John sits on the boards of The Education Equality Project, Teach for America, Stand for Children and the Harlem Village Academies and co-chairs the Harlem Village Academies’ National Leadership Board. Additionally, Legend supports LRNG, a movement dedicated to inspiring innovation in the learning process to one that better reflects the world we live in today. In 2015 Legend initiated the #FreeAmerica campaign, designed to change the national conversation of our country’s misguided policies and to make a change in America’s criminal justice system.