Juice WRLD and the arrival of ’emo-rap’

Juice WRLD and the arrival of ’emo-rap’ 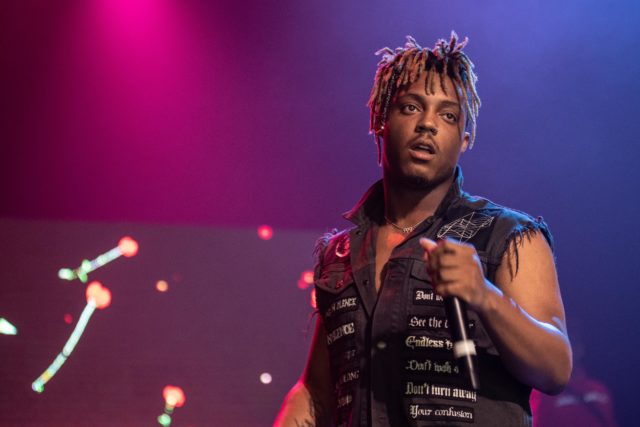 “Mumble rap” is a disparaging term used to describe a style of rapping popularized by Atlanta artists like Future, Young Thug, Migos and Lil Yachty. Juice WRLD, born Jarad Higgins, enunciates a little more when he raps, but he began his career as a “mumble rapper.”

“I don’t remember this, but my aunt and my cousin said I was in my crib and they would rap to me and I used to baby mumble the words with them,” Higgins said in a short film produced by Apple Music.

Higgins was a musically-inclined child who grew up in the Chicago suburbs. He took piano lessons, played guitar and drums, and started freestyle rapping his freshman year of high school. With the support of his peers, Higgins began taking the craft seriously, posting his first song to SoundCloud when he was 16, then going under the moniker “JuiceTheKidd.”

“At first I used to want to be like Eminem or Tyler, the Creator. I used to say wild ass sh*t to get people’s attention,” Higgins said in an interview with Mass Appeal. 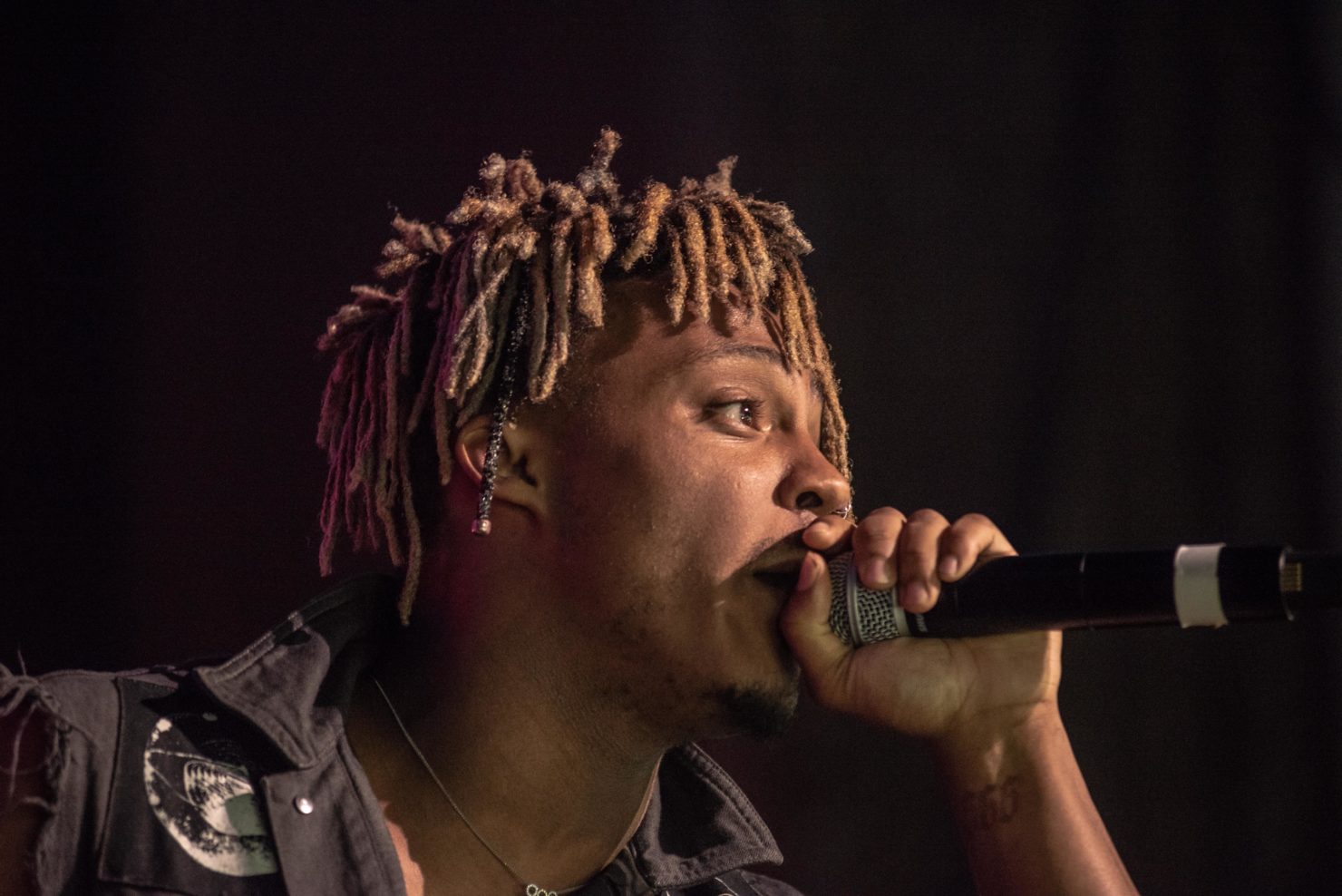 Higgins attributes the Guitar Hero and Tony Hawk video games for his introduction to rock music. His mother was a very religious, conservative parent. She did not allow him to listen to hip-hop, but considered pop and rock to be more acceptable.

Of all the artists working in the emo-rap lane, Juice WRLD feels the most authentic. He has expressed affection for “anything from alternative to post-hardcore: Black Sabbath, Fall Out Boy, Senses Fail, Megadeth, Panic at the Disco, Three Days Grace” and more.

Higgins also maintains a respect for hip-hop’s half-century lineage and his hometown scene. His stage name comes from a hairstyle Tupac wore in the 1992 film “Juice” and he cites Chicago’s Chief Keef as his biggest influence and inspiration. At the Riverside performance, Higgins paid tribute to Keef by rapping along to his hit “Faneto.” 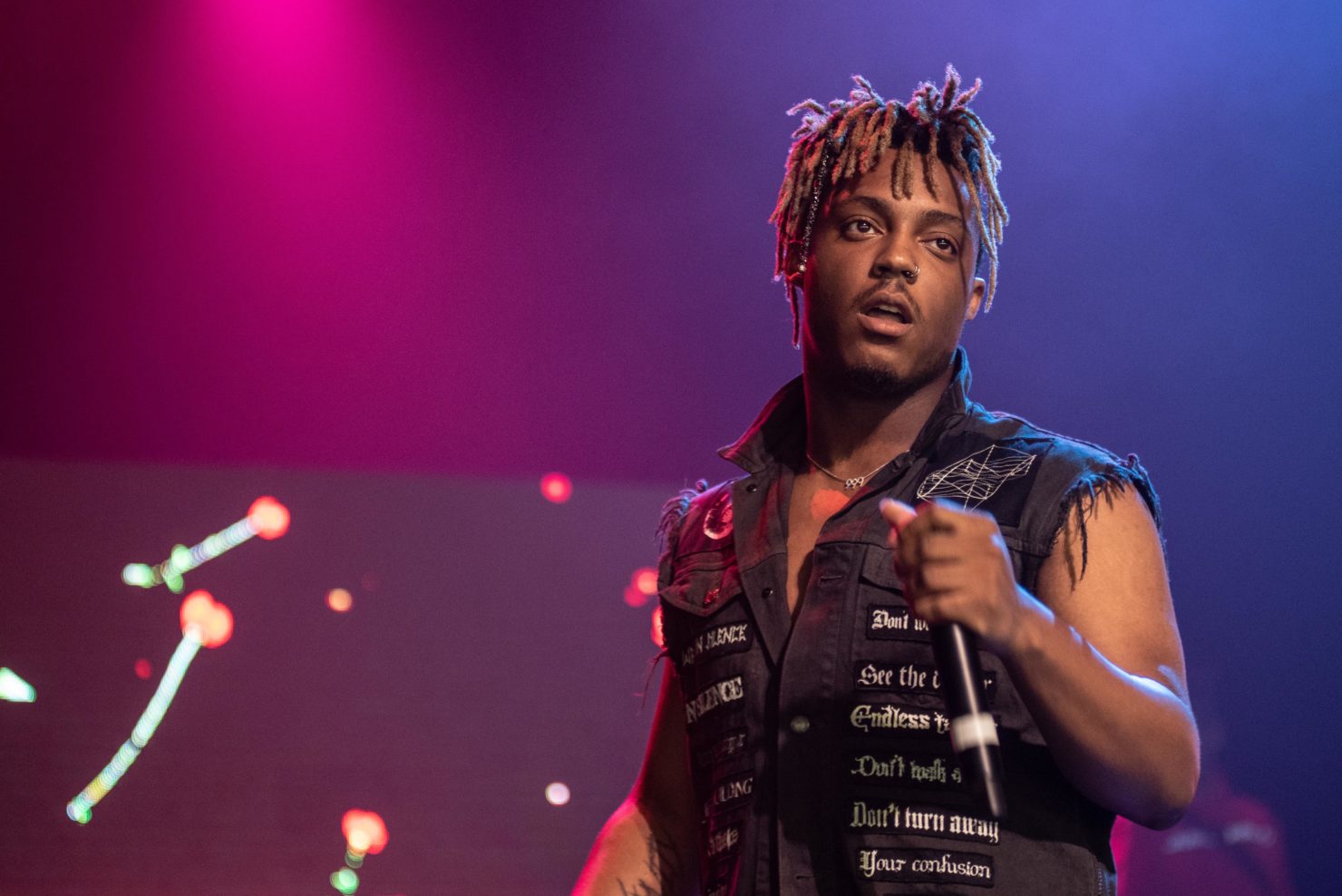 Juice WRLD at the Riverside in Milwaukee by Daniel Ojeda

As “Faneto” blasted through the Riverside’s speakers, Higgins invited some of his homies on stage who had made the short trip up from Chicago. Among them was Cole Bennett, a music video director with the highly-influential Chicago-based blog Lyrical Lemonade. Some critics consider a video from Bennett to be “the holy grail of co-signs in 2018.”

With the Lyrical Lemonade lift, Juice WRLD’s organic online fanbase grew quickly. As similar artists like Post Malone and Lil Uzi Vert were making waves on the charts, the music industry came calling. Higgins landed a three million dollar deal with Interscope, which is impressive considering he only had one song with over a million streams at the time. The May release of “Goodbye & Good Riddance,” Juice WRLD’s debut studio album, peaked at number four on the US Billboard Hot 200 and the smash hit “Lucid Dreams” is among the nominees for “Song of the Summer” at the upcoming MTV VMAs.

The first time I heard the term “emo-rap” it was in reference to Atmosphere, the hip-hop group from Minneapolis. This was on the heels of the group’s second studio album, 2002’s “God Loves Ugly.” The vulnerability in Slug’s verses was alluring, especially amid a sea of hyper-masculine rappers. The next summer, while drowning in a bad high school breakup, “God Loves Ugly” was my life jacket.

Two decades and five kids later, it feels more fitting to call Atmosphere “dad rap” at this point. But a wave of young hip-hop artists who grew up on 2000s emo and pop-punk have put “emo-rap” back on the map. Not to mention, on the charts.

On August 14, The Riverside Theater welcomed Juice WRLD, Apple Music’s “Up Next” artist of the summer and a leader of the modern emo-rap movement. It was only the second booking of a young hip-hop artist by the Pabst Theater Group and the 19-year-old Chicagoland native put on a rockstar performance worthy of the lavish confines.

Mainstream audiences finally seem ready to process expressions of black pain—specifically that of black men—that aren’t coated in a facade of bravado, sex or violence.

It is easy to dismiss “Goodbye & Good Riddance” as an album that irresponsibly promotes drug use. But when you read between the lines, you realize it is a concept album about heartbreak and the desire for the escape that comes with it. Higgins admits to having used Xanax in high school, but he does not currently condone excessive drug use. He even ended his Riverside set by discouraging fans from taking Xanax.

It is important to note that a number of hip-hop artists paved the way for the current emo-rap wave. Luminaries like Kanye West, Kid Cudi and Drake walked so that Juice WRLD could run.

As writer Breana Younger points out in her article “To Be Young, Angsty and Black: On Rap’s Emo Moment” for Pitchfork, “It’s not that purveyors of rap only recently became capable of such expression. It’s that mainstream audiences finally seem ready to process expressions of black pain—specifically that of black men—that aren’t coated in a facade of bravado, sex or violence.”

Juice WRLD and his peers are opening doors for black identity and representation sorely needed to transcend stifling stereotypes.

At the Riverside, Higgins strutted across the stage, played air guitar and commanded the mic like a bona fide rockstar. Like the BROCKHAMPTON collective, Juice WRLD is breaking down genre barriers and carving out a unique position in the music industry. 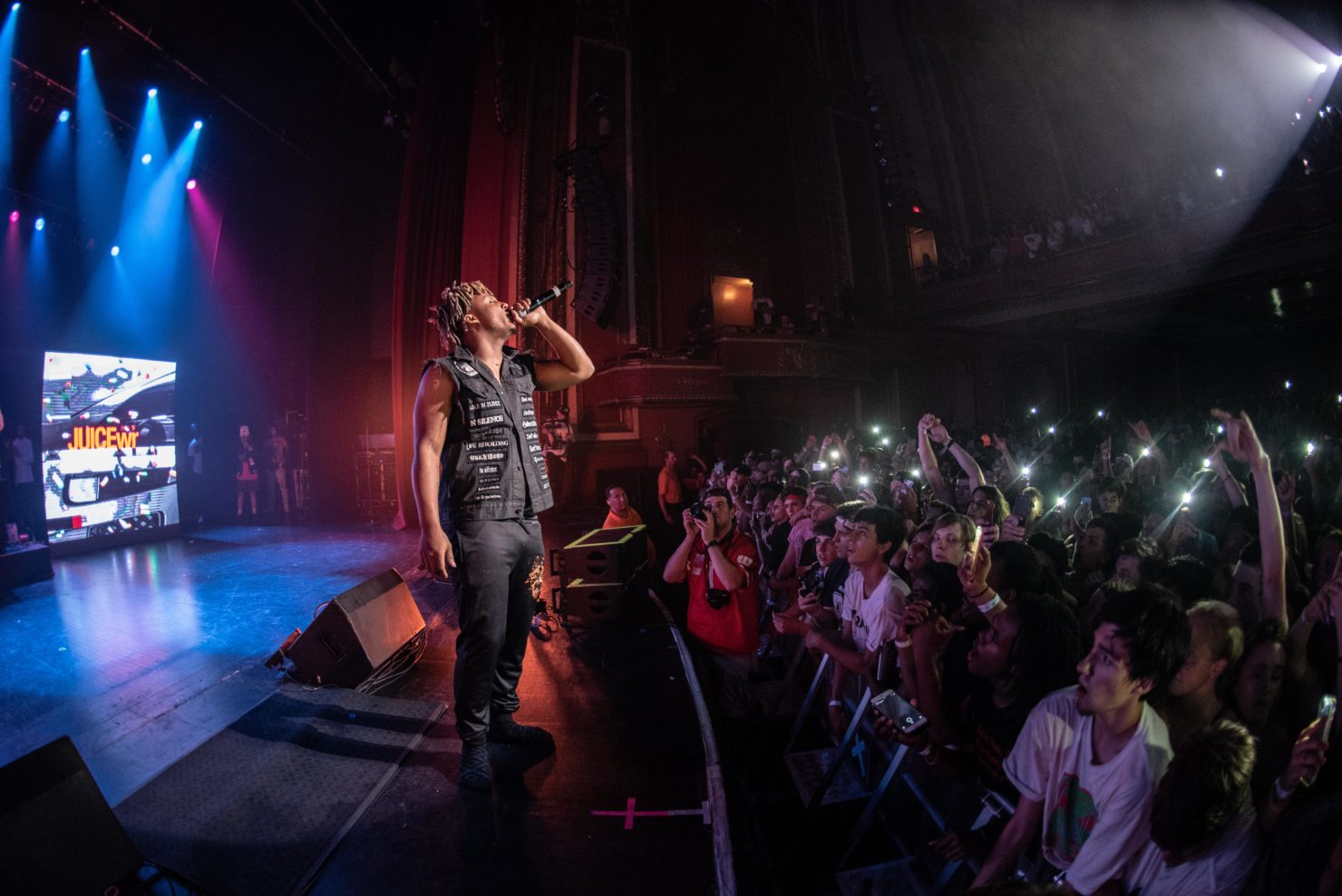 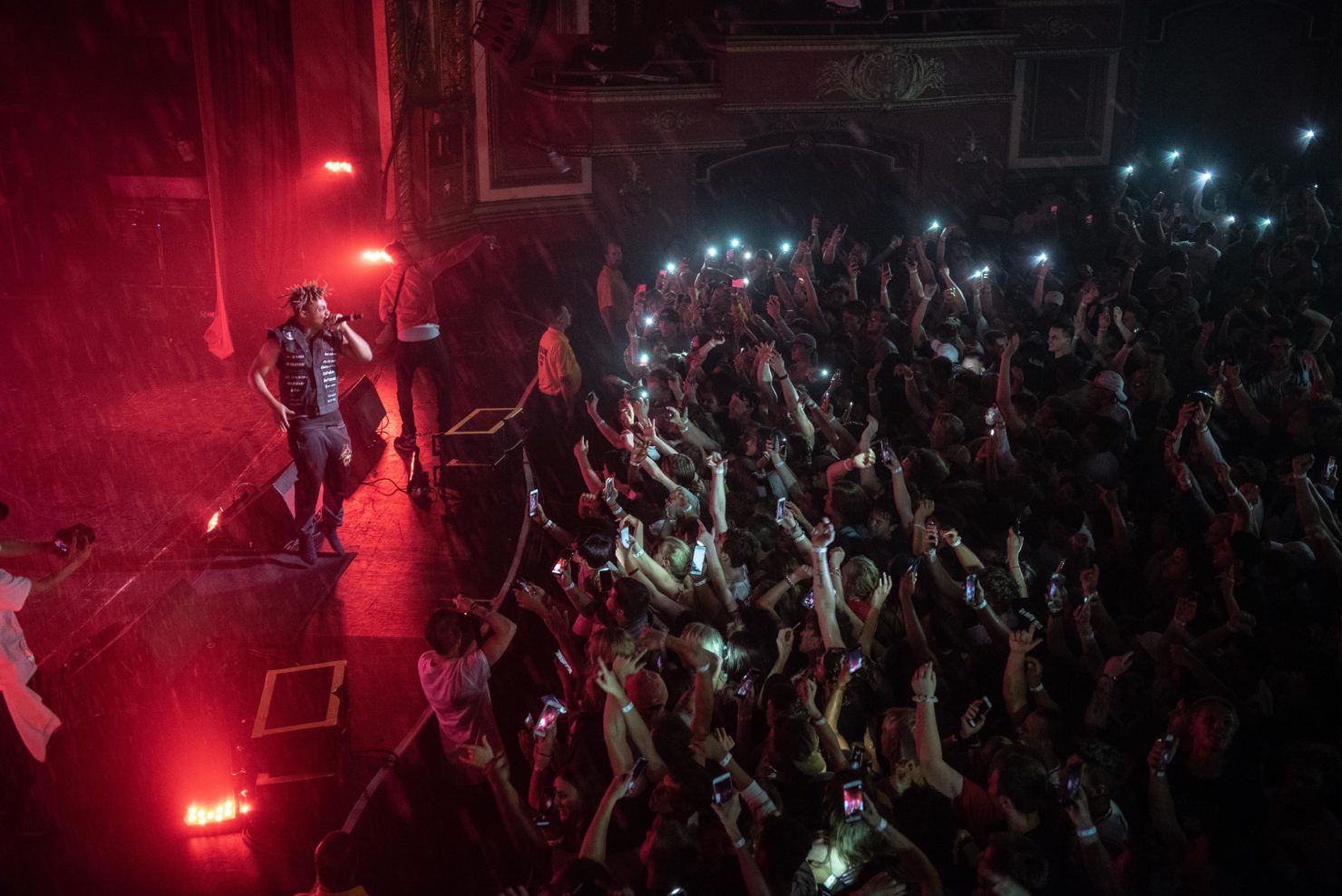 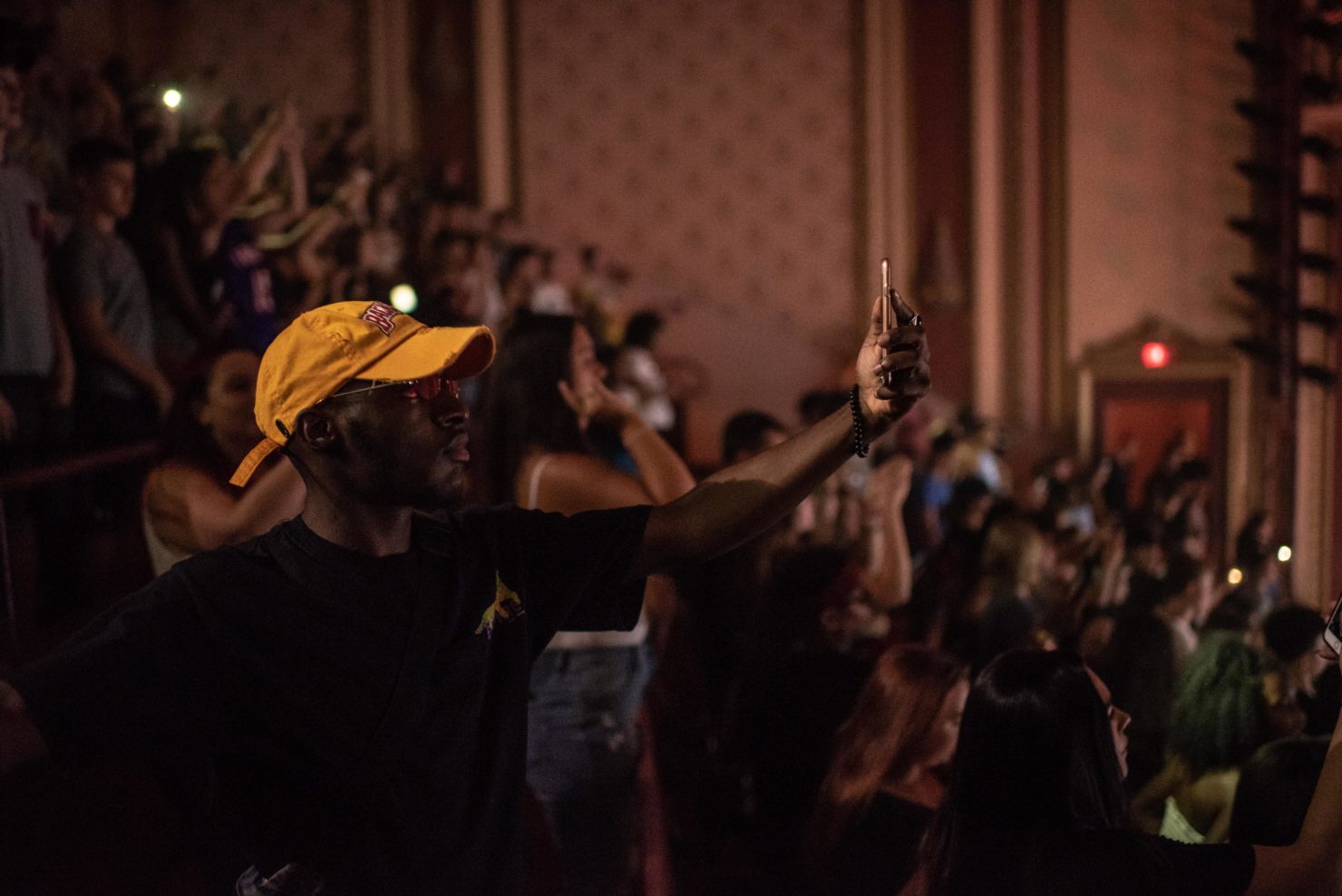 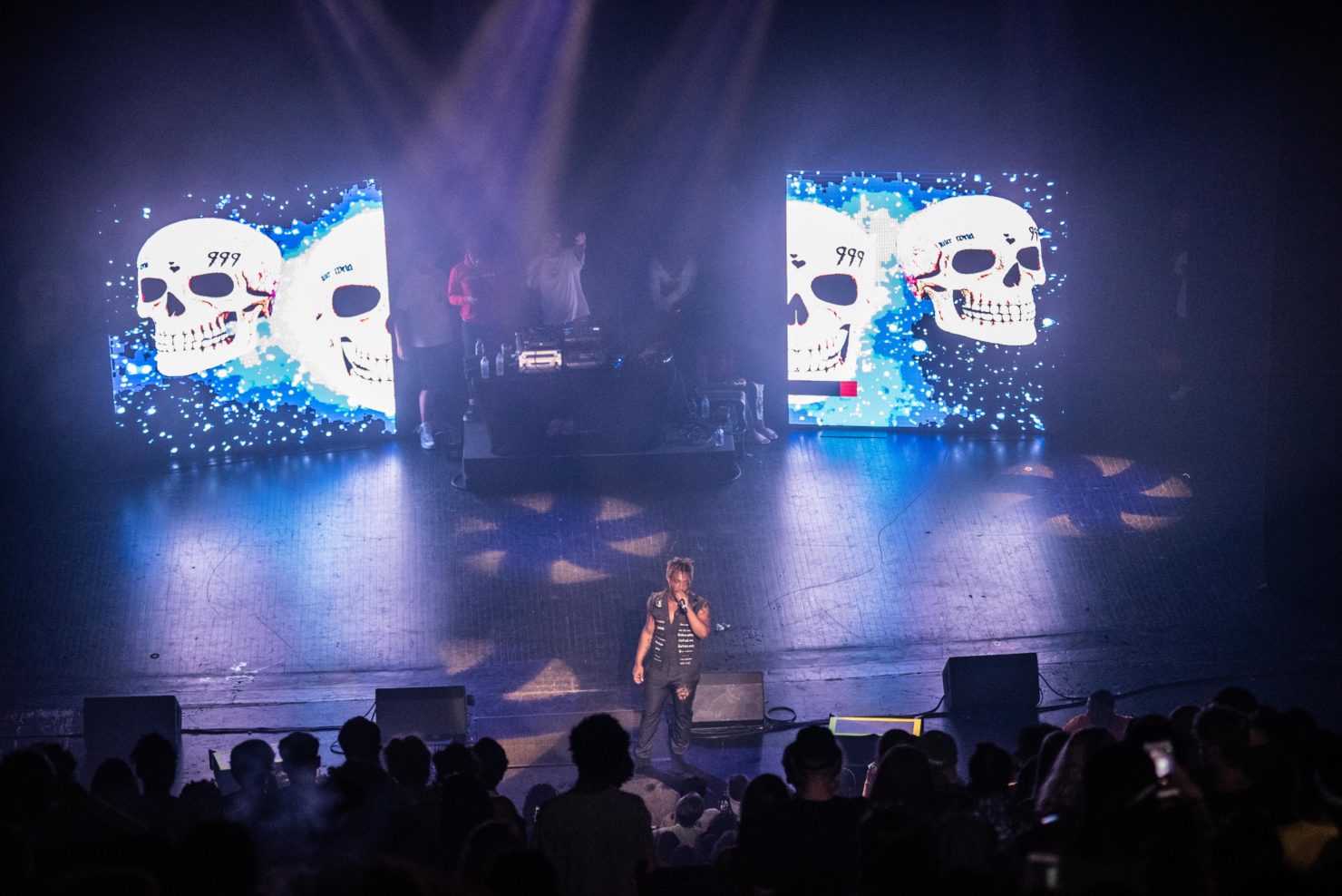 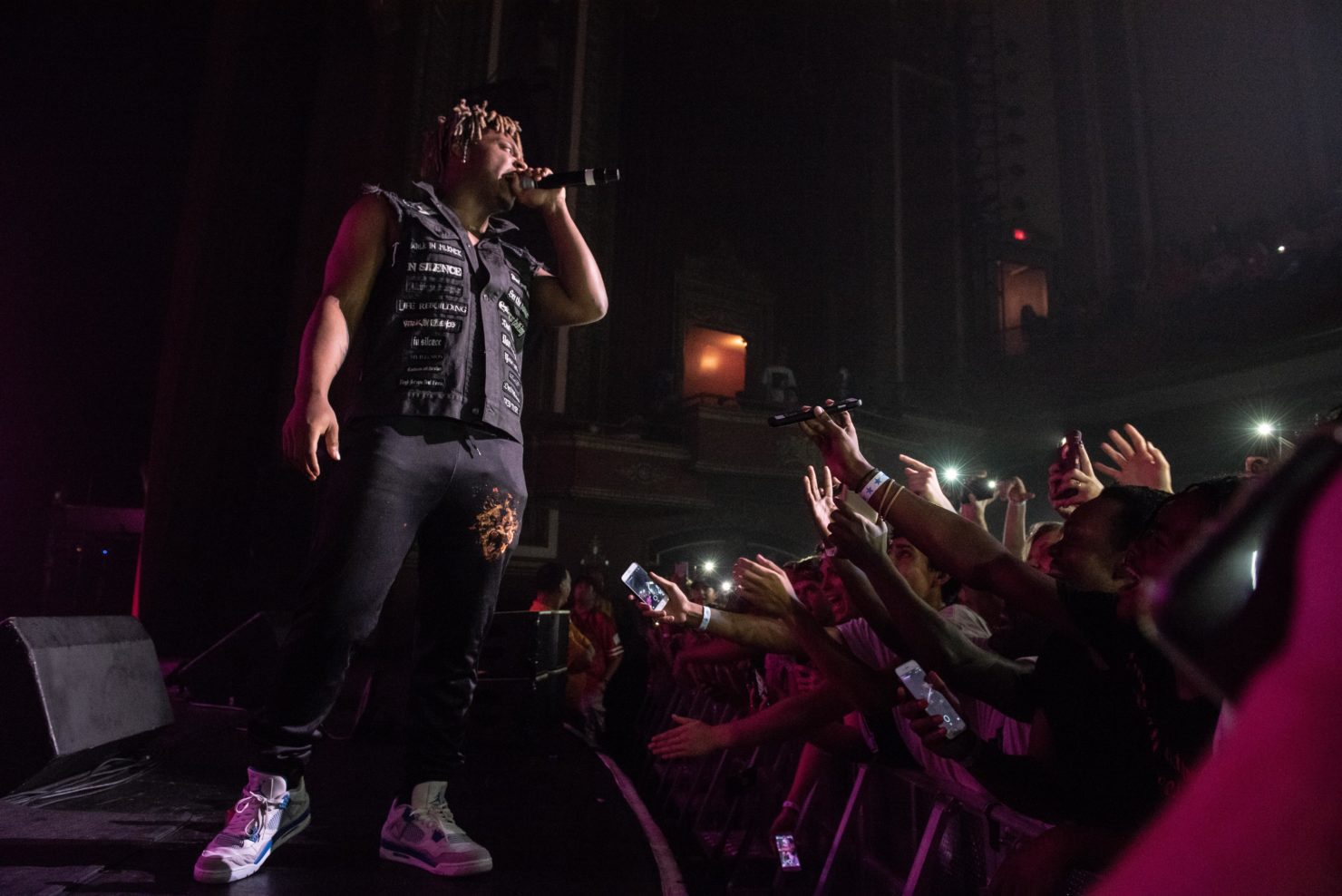 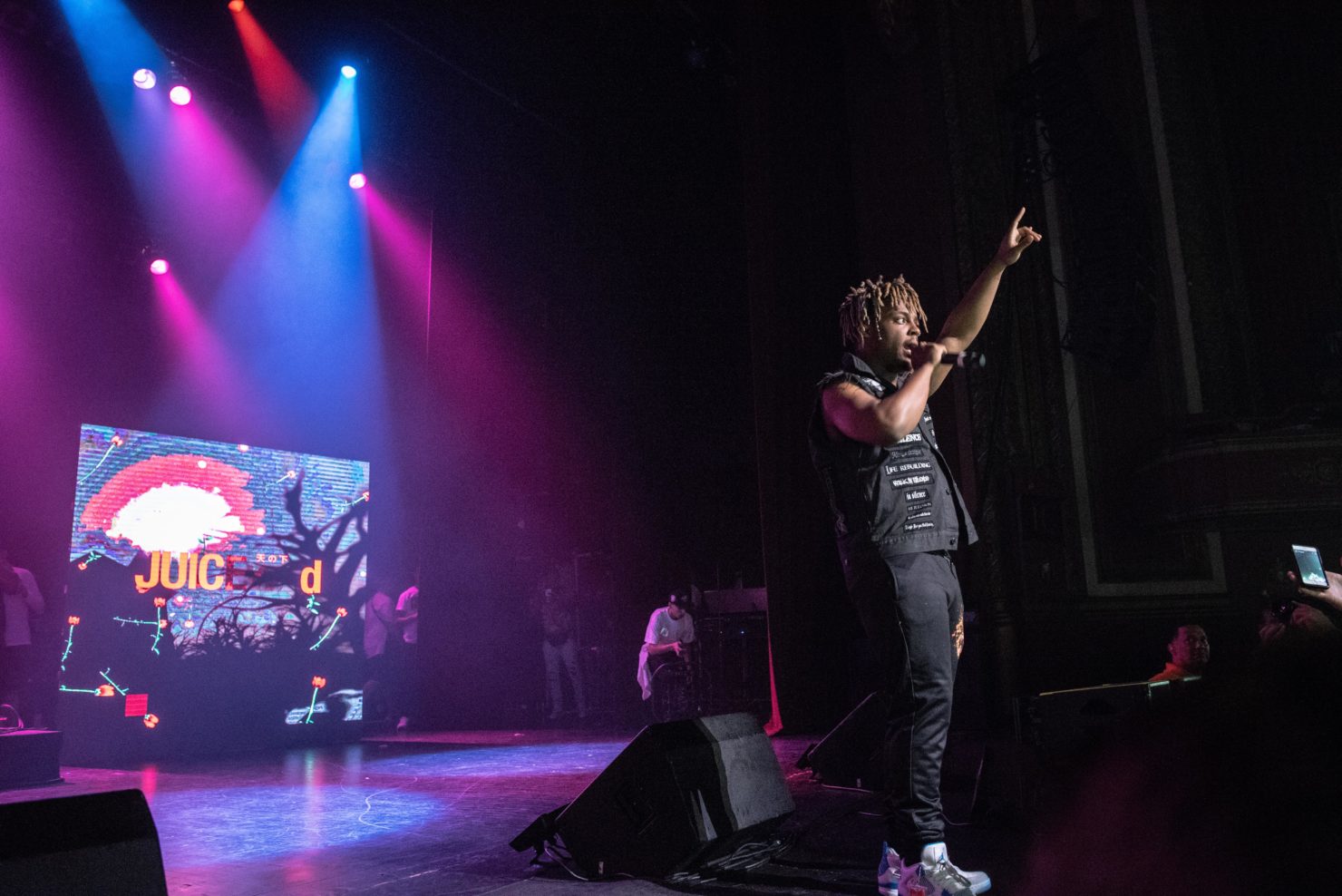 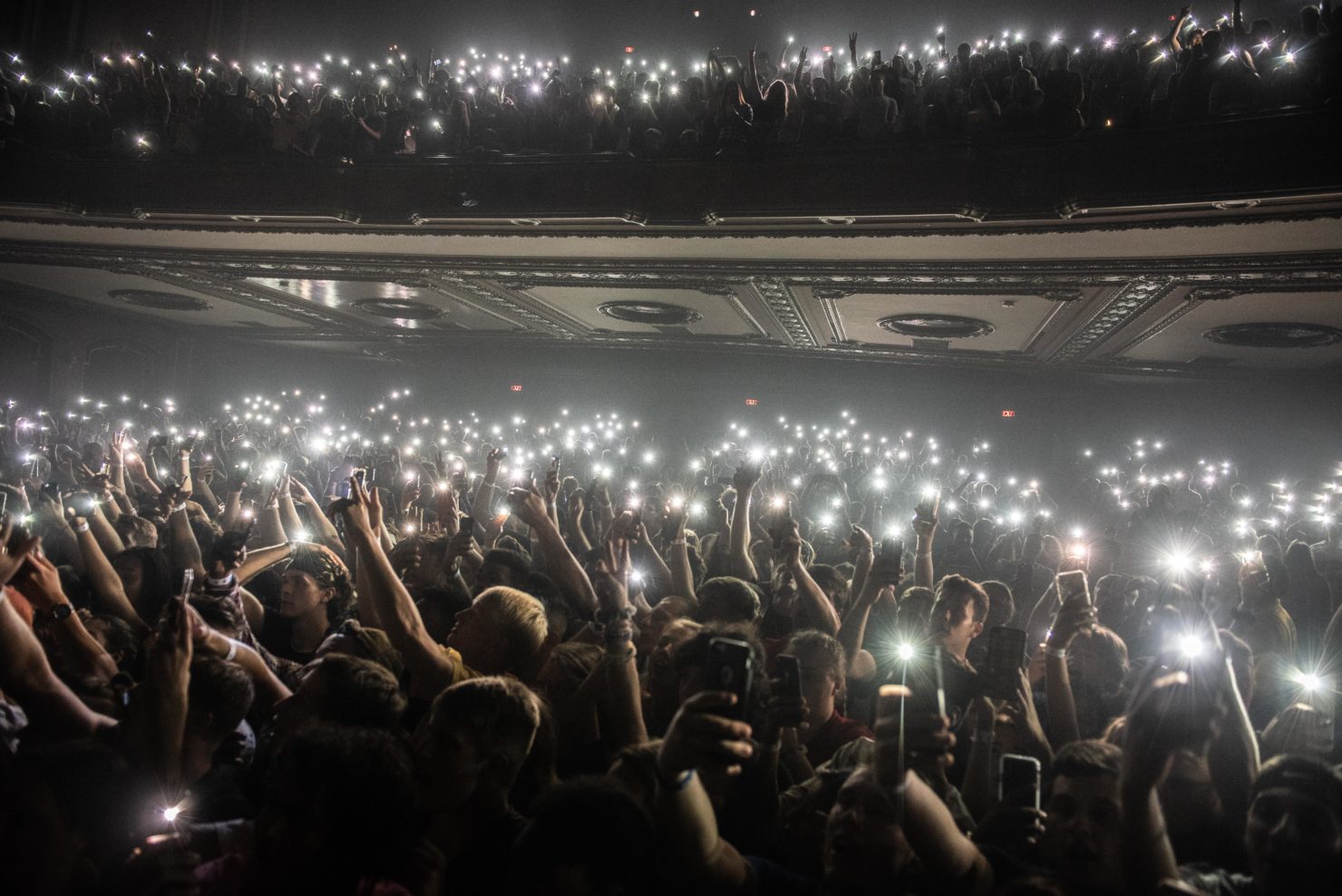 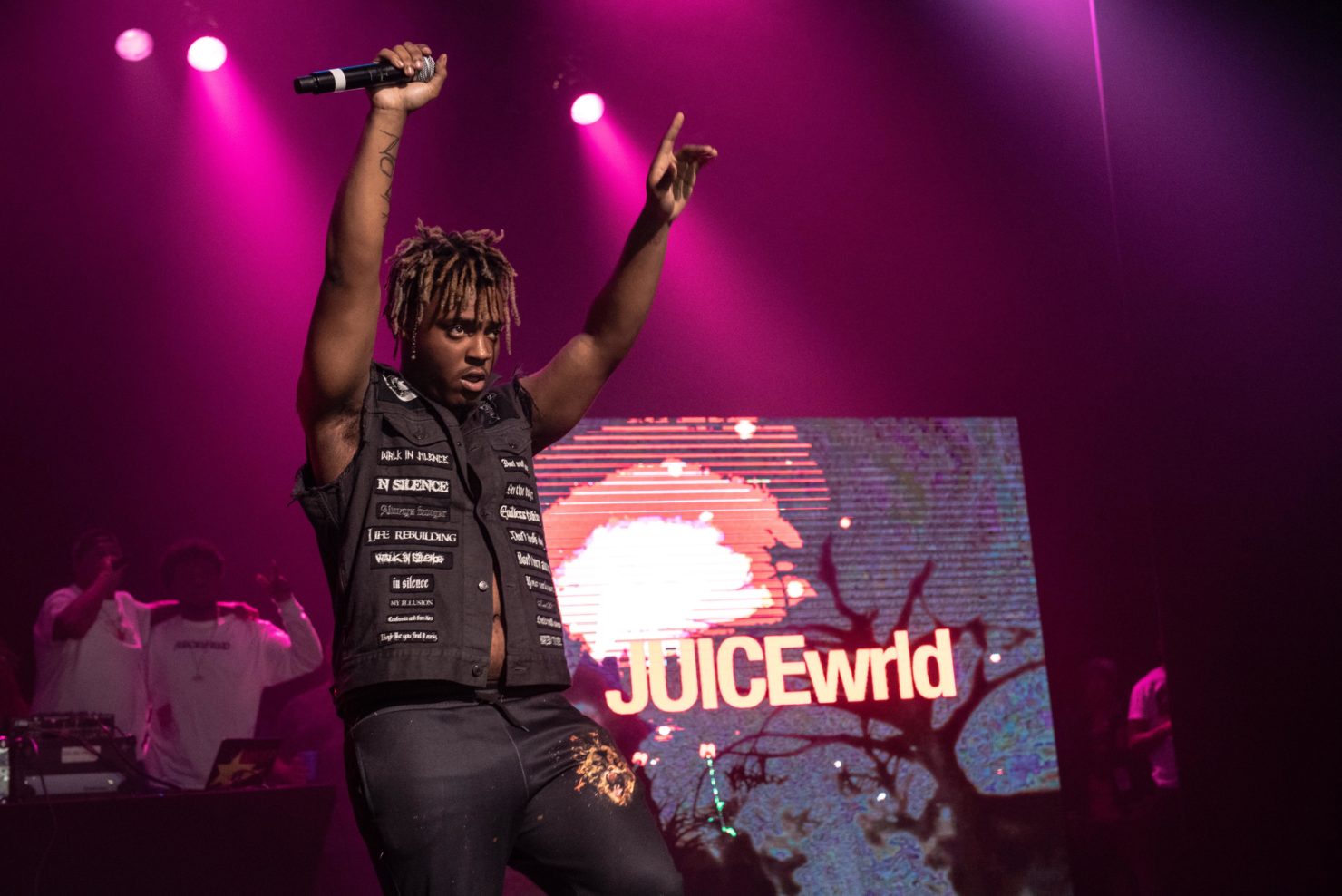 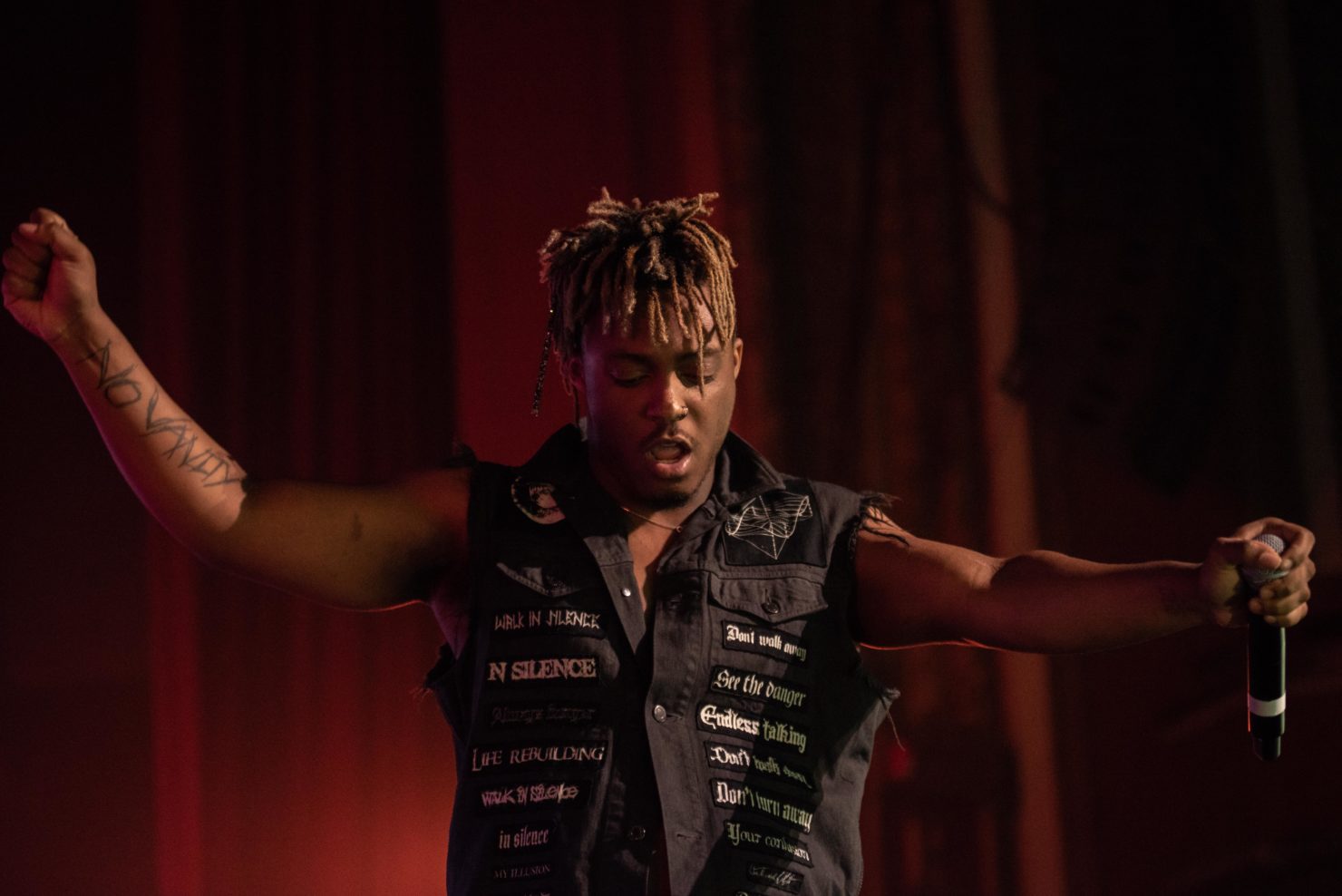 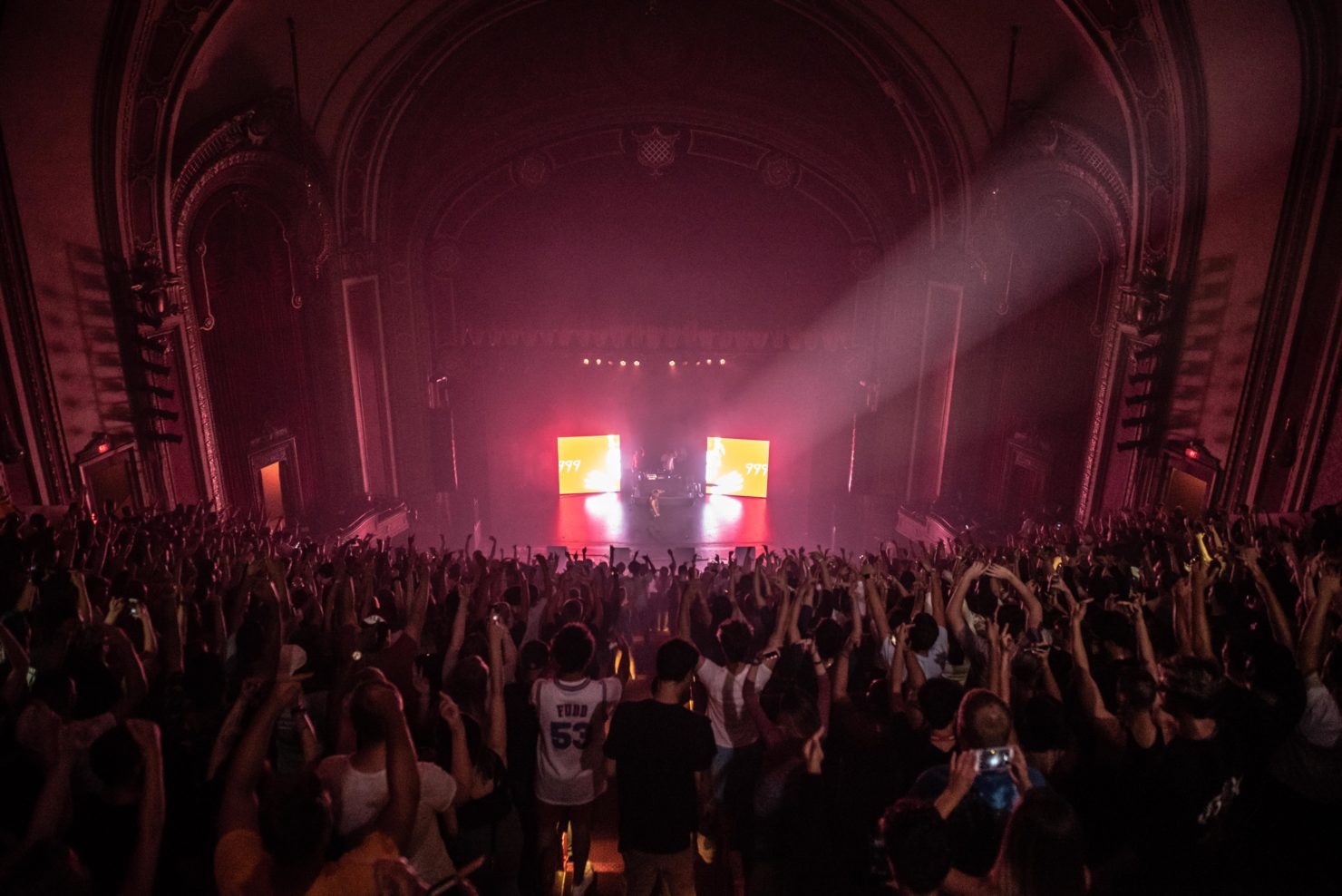