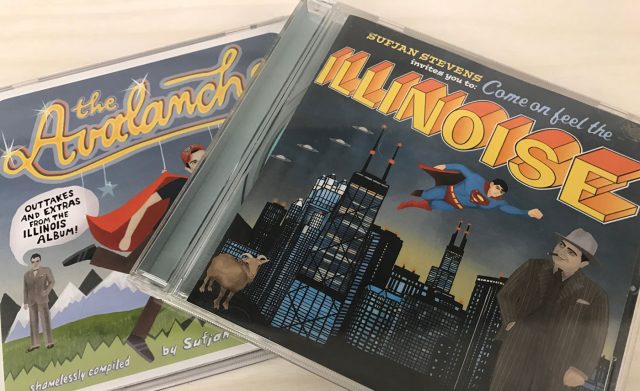 Following a string of four albums in five years, including the ambitious ‘Michigan’ album about his home state, Sufjan Stevens released the sprawling, epic “Come on Feel The Illinoise” in 2005.  Critics far and wide fell over themselves praising the record and rightfully so. At the time, the album was promoted as the second in a series of albums that would chronicle all fifty states, an untenable, if crafty, concept.

At times, the record seems like the musical equivalent of The Max Fischer Players, other times like a Paul Buckmaster-conducted symphony but on balance the entire 74 minute affair is nothing short of brilliant. The rich insider lyrical detail coupled with sometimes-opulent orchestration other times spartan instrumentation makes it an always-enthralling listen. Sufjan managed to craft an album full of intensely researched historical detail but it never gets bogged down in its minutiae. For instance, “Casimir Pulaski Day” cleverly manages to reference the Revolutionary War hero, whose birthday was briefly a holiday in Illinois public schools, without any other details of the Brigadier General in the tender song.

On the other hand, “John Wayne Gacy Jr.” paints the prolific serial killer in a sympathetic light. Over just piano and acoustic guitar, Stevens recounts the chilling details of Gacy’s life: his childhood, his seemingly innocuous public service as an adult down to the stark details of his murderous pursuits. The final inhale and exhale of the song echoing those of Gacy’s victims is the album’s most striking moment.

The mood of most of the rest of the album isn’t nearly as dour and in parts it’s downright triumphant. As would be expected in anything written about the Land of Lincoln, Abe and Mary Todd Lincoln make cameos, as do smaller towns like Jacksonville, Decatur and Superman’s Illinois hometown of Metropolis.  Superman even held up production of the record as his likeness graced the original cover, causing a copyright issue.

It wouldn’t be an album about Illinois without Chicago and the namesake song might just be the album’s masterpiece. The song is framed around the narrator’s drive to Chicago en route to New York. Draped in strings and horns, “Chicago” managed to make a six-minute song only tangentially about Chicago into a ‘hit’ on smarter Triple A radio stations nationwide. It also put the song among the all-time great songs written about that toddling town.

If this is the first you’ve heard of “Come On Feel The Illinoise”, remedy that immediately and listen to this album. If you’re well versed in it, it’s time to revisit it, it never gets old.