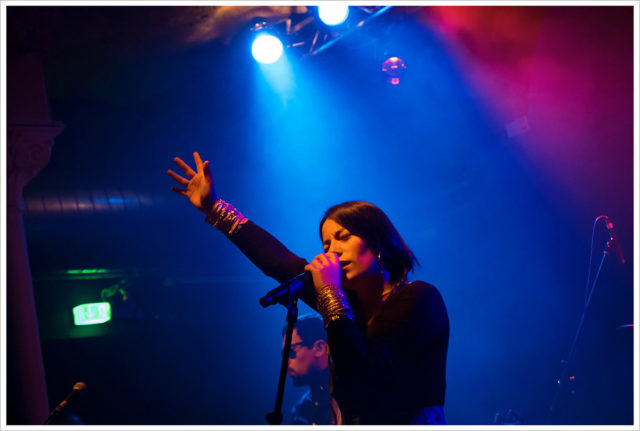 For Womxns International Day, gem of human, Dori Zori, was a total badass (as always), and did a full day of womxn on-air (again!). She pulled some of the 88Nine team to help her throughout the day and I was lucky enough to jump in the studio with her. I highlighted some music and stories from Latinx artists that make me dance, make me cry, make me proud, and, overall, have made a huge impact on my life.

A little background: I’m Steph Baghai (hi!) and I primarily work in the Underwriting Department aka our “business partnership” department. I also DJ on Saturday mornings from 6 -9 a,m. and I have a weekly segment that highlights new releases from our very own, and very talented, city called MKE Music Weekly — fitting title, right?

Anyway, here’s a little about the songs and artists I picked and why I picked them. You can also listen to it below.

Ana Tijoux was one of the first Latinx artists I was exposed to that took a political stance in her music — she seemed like such a powerful force and not like many pop-focused or “neutral” Latin artists in the mainstream during that time. Born in France to two Chilean exiles who fled the 1973 Chilean Coup d’état, her music is used as a platform and vessel of expression.

When I started to discover music on my own, I remember finding Natalia y La Forquetina in a random Limewire mix and being hooked. Natalia went on to do solo music and is now considered one of the most successful singers in the pop rock scene in Latina America.

Ileana Cabra, also known as iLe, is a Puerto Rican singer, composer and vocalist. She started as a teenager as the female singer of one of my favorite groups, Calle 13. I would watch MTVTres a lot in the mornings before school and their music videos would always be playing.

Gal is a Brazilian staple in pop music – she was a key player in the tropicalia movement in the late ’60s and continues to make hits. She’s never someone I really sought out, her music would either be on while visiting family or watching Brazilian shows, etc. She’s one of those artists where I didn’t know how much I knew about until I really dug into her discography.

Piggybacking off Gal is Ivete Sangalo, another prominent Bahaiana/Brazilian artist. Last year, I talked about Daniela Mercury and how my mom was a big fan growing up — Ivete is my equivalent. They’re both iconic superstars in Brazil and worldwide. Every Christmas, we put on her live concert DVDs during dinner/games/etc. and now I can’t imagine listening to anything else during the holidays.

One of the more recent artists I brought is Nathy Peluso. She is a Latin-infused pop and dance star from Buenos Aires. I heard this song not too long ago and couldn’t stop listening to it. She does a really fluid job of blending soul, R&B, hip hop and Latin funk.

Angelica Garcia – “It Don’t Hinder Me“

I included Angelica Garcia because I love this song and I feel partial to her since our upbringings are very similar. We were both born and raised in a Latinx community of Southern California and she brings a lot of her multicultural background in her music. She combines a lot of fun ’90s style with modern indie music.

The quartet is a first-generation Columbian via New York group who are heavily influenced by some of my favorite genres — heavy metal, psychedelic funk and soul. Led by Carolina Olivero, the group was inspired by a Yoruba term Ahomale and pays a lot of homage to Afro-Latin roots. A lot of Latin cultures integrate a derivative of Yoruba practices and religions in their own belief systems, Brazilians especially, so I resonate ~heavily~ with Olivero.

Tatiana Hazel – “No Me Encuentras”

I first heard about Tatiana at a Pabst Street Party not too long ago. The Chicago native has since paved her way in the Latinx Indie Pop music scene. She’s now based in Los Angeles and continues to make music in Spanglish.

Paulina is one of the first pop stars I knew about. She is one of the BIGGEST Mexican superstars. While she started as a singer, she has built herself a multi-industry empire. She started acting, participating in TV music competitions as a judge, hosted TV shows, has an extensive modeling career and became a killer businesswoman. She’s one of the most well-known Latin superstars and started her career in the ’80s and has not slowed down. at. all.

Another massive superstar. I recognized her as a telenovela star before I connected her music and her acting. The Mexican singer is one of the most celebrated Mexican singer, songwriter and actress in the country’s history. She’s often referred to as the Queen of Latin Pop, making herself a household name since the ’80s. She worked with a lot of the same producers that Paulina Rubio has so I wanted to pair them up.

I wanted to end on Alice Bag. 1. She is an ICON and my respect for her is unprecedented 2. She is a Chicana punk legend. She has been a huge voice in the punk, queer pop and alternative rock scene and always been incredibly vocal in her beliefs and stances. The author, educator and huge feminist archivist co-founded (and was the lead singer of) The Bags in ’77 during the initial wave of punk rock in Los Angeles. She continues to tour with her floor project that is heavily focused on education. Also, this song was almost too perfect for this.