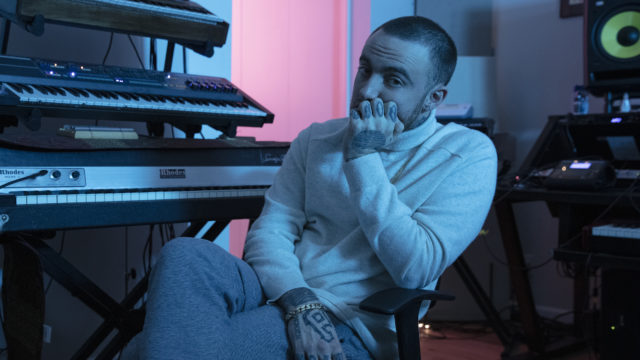 Mac Miller’s estate has released the rapper’s first posthumous single, “Good News,” from the just-forthcoming Circles, out Jan. 17. Produced by Miller and über-producer/composer Jon Brion, the release is accompanied by an animated video, bookended by studio footage of Miller recording an unreleased song.

Mac Miller, born Malcolm McCormick, died on Sept. 7, 2018 from an accidental overdose. Per a note from his family, at the time of his death Miller was well into completing an album meant as a companion to Swimming, which he’d released a month prior to his death. Together, they’d complete a concept: Swimming in Circles. To flesh out some of his early sketches for the project, Miller enlisted Jon Brion — who, after Miller’s death, cleared his schedule and dedicated himself to finishing the album.

“Good News” is a peek through the tangled wires and shadowy crevices of a soul in the process of healing. It’s a glimmer of sunlight through dusty shutters, rendered by Brion in cozy textures, a soft blanket of plucks and pads. His singing is somber, but glowing with color, as if he’s emerging from a dark place. Miller hasn’t seen the sun in a while; he’s “so tired of being so tired” and “spring cleaning” his mind.

It’s hard to hear Miller rap “there’s a whole lot more for me waiting on the other side” without the heart sinking — a feeling that now lurks at the edges of Miller’s music. Swimming-era Miller was 26 and at the peak of his powers, as sharp and earnest a songwriter as any pop rapper working. There are likely many more Mac Miller songs and fragments in the vault, but Circles may be the last time we’re so close to his vision.