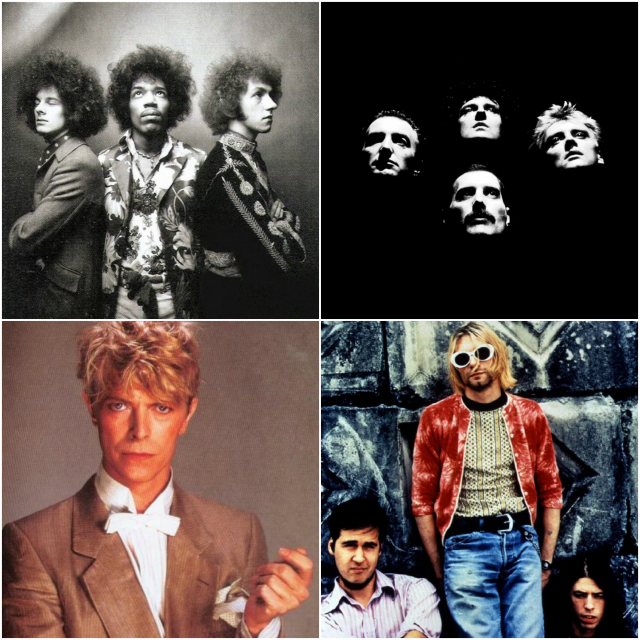 1967 was arguably the biggest year in music history, with countless legends releasing some of the most successful and acclaimed albums of all time; December was no exception. While none of these were the most popular album by these visionary artists, they are undoubtedly in the upper echelon of their catalogs.

‘Axis: Bold as Love’ by The Jimi Hendrix Experience — While the second album from guitar virtuoso Jimi Hendrix did not have as many hits as his debut, ‘Axis: Bold as Love’ is just as critically acclaimed. With underrated tracks such as “Spanish Castle Magic” and “If 6 was 9,” it has earned legendary status since its release, earning a spot on Rolling Stone’s Greatest Albums of all time list.

‘Their Satanic Majesties Request’ by The Rolling Stones — While some dismiss this Rolling Stones album as a misguided attempt to match ‘Sgt. Peppers,’ others consider it an unforgotten classic, and an fascinating look into their experimental side. While it does not have any of the ubiquitous hits we all love from the band, it dives deep into some unexpected psychedelic experimentation from the group.

‘The Who Sell Out’ by The Who — The Who can be credited as musical innovators in many ways: hard rock, punk rock and rock operas can all be traced back to work by The Who. Thanks to ‘The Who Sell Out,’ they are also credited with one of music’s first concept albums, with the album playing like a commercial radio broadcast. With “I Can See For Miles” being its only commercial hit, ‘The Who Sell Out’ is a cohesive project rather than a simple collection of hits.

‘John Wesley Harding’ by Bob Dylan — Bob Dylan released a Greatest Hits album earlier in 1967 before ‘John Wesley Harding,’ so he had a storied career before this point; but Dylan showed no signs of slowing down on this album. The album’s biggest hit was “All Along the Watchtower,” which has since been covered by legends like Jimi Hendrix. It graced Rolling Stone’s Greatest Albums list, and is one of his most important works.

Adding up to a whopping 63 million album sales among them, these five legendary albums all were released in October of 1977. Arguably all in different genres, this diverse collection contains some of the biggest hits of the 1970s.

‘Out of the Blue’ by Electric Light Orchestra — It took seven studio albums to reach their peak, but Jeff Lynne and ELO did just that with their double album ‘Out of the Blue.’ Written and produced entirely by Lynne itself, the intricate processes that went into this album can certainly be felt in the music. With smash hits like “Mr. Blue Sky,” it’s no wonder the album has sold over 10 million copies worldwide.

‘News of the World’ by Queen — While this album was mostly seen as mediocre by critics, Queen’s ‘News of the World’ gave the world something it will never forget: “We Will Rock You” and “We Are the Champions.” These powerhouse tracks, now fairly overplayed, are almost guaranteed to be a part of any sporting event in America. Because of these, the album has sold over 5 million copies.

‘Bat Outta Hell’ by Meatloaf — At an incredible 43 million albums sold, ‘Bat Outta Hell’ is one of the most commercially successful albums of all time. On this overly-dramatic glam rock opera, the incredible talent of Meatloaf’s vocals proved to be an excellent vehicle for the beautiful compositions of Jim Steinman. Meatloaf had not reached near this success before ‘Bat Outta Hell,’ and he never did after.

‘Nevermind the Bollocks, Here’s the Sex Pistols’ by The Sex Pistols — For most bands, being fired from two labels and banned from most live venues in England would be a death sentence. However, for The Sex Pistols, it just maximized their punk rock reputation. The controversial group released their debut album to nearly universal acclaim, since gaining the reputation of possibly being the greatest punk album of all time.

‘Heroes’ by David Bowie — The second album of the Berlin Trilogy with producer Brian Eno, David Bowie helped bring in the new wave era with his album ‘Heroes.’ The album’s foray into electronic and  ambient music, often synonymous with Eno, was just one of Bowie’s countless subgenre experimentations. It is seen today as one of Bowie’s numerous classic albums.

While most of these albums have not reached a similar level of commercial success to the other groups, these albums are all cult classics in their respective genres of alternative music. With alternative rock, punk rock and synthpop all being young genres at the time, these albums all help solidify them in the world of popular music.

‘Murmur’ by R.E.M. — Few albums can say they helped usher in an entirely new musical era and landscape, but R.E.M’s debut album ‘Murmur’ did exactly that. Michael Stipe’s strange vocals and Mike Mills’ jangly guitar threw all stereotypes of rock music out the window, essentially creating an entirely new sound and establishing alternative rock as a genre. ‘Murmur’ has since been placed on countless greatest albums list, and is still one of the best albums in alternative rock.

‘Let’s Dance’ by David Bowie — Without the context of the time, it is easy to dismiss David Bowie’s ‘Let’s Dance’ as a typical ‘80s pop album. However, when the album was released in 1983, the album’s sound was a revelation. Co-produced by Nile Rodgers of Chic, the album combines blues guitars, courtesy of legendary guitarist Stevie Ray Vaughan, with dance and pop sensibilities, creating a sound that was surprisingly far off the mainstream music of the early ‘80s.

‘Out of Step’ by Minor Threat — In the early 1980s, hardcore punk was still a new genre. With punk rock in general not even a decade old, there was a lot of potential to see where it would go. In 1983, Minor Threat created an essential album for hadcore punk with ‘Out of Step.’ The album was aggressive and rough around the edges, with great melodies at the same time, making it an accessible album for those new to hardcore punk.

‘Violent Femmes’ by Violent Femmes — Milwaukee legends Violent Femmes, much like R.E.M., were one of the few groups on the forefront of alternative rock in the early ‘80s. On their debut album, the band managed the rare contradiction of creating a full sound with a minimalistic style, much to the pleasure of critics everywhere. Violent Femmes reached the most success of any Milwaukee band ever, earning platinum certification and being considered by many as one of the best albums of the ‘80s.

September 1991: Beginning of a new era

The music of 1991 brought in a new era that overtook the rest of the decade. The glossy and decadent music of the ‘80s was replaced by the angst, aggression and grime we associate with the 1990s. This group of albums, amassing a total of 63 million copies sold, proved that a new cultural landscape was upon us, and was here to stay.

‘Use Your Illusion 1 and 2’ by Guns ‘n’ Roses — Coming off of the insane success of ‘Appetite for Destruction‘ four years prior, expectations were high for Guns ‘n’ Roses. The hard rock band shocked the world with their dual release in 1991, ‘Use Your Illusion I and II,’ and arguably exceeded those expectations. At a combined 30 songs, the two albums are filled with hit ballads, shredding guitars, and the classic vulgarity of Axl Rose.

‘Nevermind’ by Nirvana — Though it was not the first in the genre, only Nirvana can say that they brought grunge to the masses. The band’s first album with drummer Dave Grohl, ‘Nevermind’ was produced by Madison’s own Butch Vig, who many consider responsible for honing in the chaotic genius of Kurt Cobain. This lo-fi, in-your-face sound was a godsend for the newest generation of angsty teens, leading to over 10 million albums sold and the consideration of many as one of the greatest albums of all time.

‘Blood Sugar Sex Magik’ by Red Hot Chili Peppers — Despite being somewhat dated in its era, ‘Blood Sugar Sex Magik’ is a perfectly preserved relic of the 1990s. Produced by the legendary Rick Rubin, this hard rock/funk hybrid proved to be a winning formula for Red Hot Chili Peppers. With huge singles like “Under The Bridge,” “Suck My Kiss” and “Give it Away,” it is not surprising that the album sold over 13 million copies.

‘Low End Theory’ by A Tribe Called Quest —  In an age where gangster rap was growing rapidly on both coasts, A Tribe Called Quest was a breath of fresh air for hip hop. With their second album, ‘Low End Theory,’ Tribe helped usher in the subgenre of alternative hip hop with their unique fusion of jazz rap and laid back vocals. Many credited Q-Tip and Phife Dawg with showing the more intellectual side of hip hop, something that was not very present at the time.

In each of these groups, all albums were released in the same month, and all became classics in their own right

April 2017 is shaping up to be a great month for music fans. Numerous prominent artists from a variety of genres, such as Father John Misty, Gorillaz, Kendrick Lamar and more promise to release new music in April, much to the anticipation of listeners. With the expectations sky-high for what’s to come in April, it begs the question: what have been some other massive album release months?