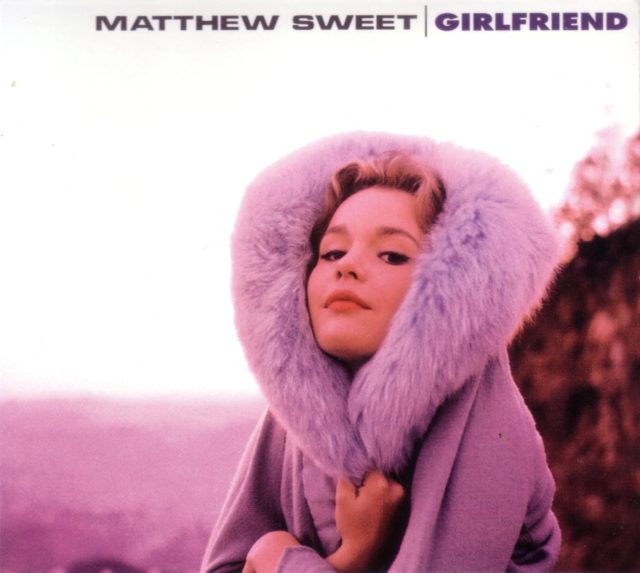 Radio had been privy to these three competing albums and though each would distinguish themselves in unique ways; “Girlfriend” and “Bandwagonesque” would both duke it out for power pop kingdom, whereas, “Nevermind” would own the ‘grunge’ race, which really had no equal that autumn, other than “Ten”. SPIN would name “Bandwagonesque” over “Nevermind” for ‘Album of the Year’– an astonishing feat, even seen through today’s lens.

An album that stands today, 25+ years later, as one of the greatest Power Pop albums ever and among the greatest albums of the 90’s.

I walked into a 16-track analog studio that day and a friend who was engineering the session I was about to be part of, cued up ‘Girlfriend’ and played it over the studio’s monitors. I had been vaguely familiar with Matthew Sweet’s previous work, which was–honestly–a bit overproduced; schlocky stuff but with TONS of potential. Lots of great players but with sub-standard material, it really lacked what Mr. Sweet would later be capable of. A friend of the engineer–a pal from Dubuque, IA–had mixed the album and was putting out feelers to gauge interest and wanted to know what potential the album held. This album was different. It sounded like nothing else that came out that year.

For this album, Matthew assembled one of the best backing bands ever. These were people who’d played with Lou Reed, The Voidoids, Television, Scritti Politti, & Lloyd Cole, among others. A crack staff of players, who clearly brought their “A” Game for an album that stands today, 25+ years later, as one of the greatest Power Pop albums ever and among the greatest albums of the 90’s.

This was the sound of what would later define the best 90’s albums: a true-to-life vibe with emphasis on craft, lyrics and sonics, not gloss.

What stands out about ‘Girlfriend’ is how different it sounded/sounds from albums of the same era. The late 80’s/Early 90’s were all about glossy production, full of compression and reverb. ‘Girlfriend’ was dry, organic and emphasized a Beatlesque stereo separation: hard pans and minimal overdubs. This was the sound of what would later define the best 90’s albums: a true-to-life vibe with emphasis on craft, lyrics and sonics, not gloss.

Opener “Divine Intervention” cribs half of Sgt. Pepper before the first vocal even comes in, 45 seconds in. And that’s not an insult; borrowing is one thing, theft is another. Sweet borrows without stealing. And that false ending at the end is a crowning touch. You know going into this, you’re in for a treat.

The title track was originally called “Goodfriend” but everyone who heard the early demos thought Matthew was singing “Girlfriend” and that shifted the album’s title from “Nothing Lasts” (a post-divorce album) to “Girlfriend” (slightly more optimistic) with contributor and confidante Lloyd Cole leading the charge. That title track proved to be the lynchpin that propelled the album into the stratosphere. Robert Quine’s slinky lead and Fred Maher’s insistent drumming anchored the song. Matthew beat Johnny Depp and Dave Pirner to the punch in writing a song for Winona Ryder–a monumental achievement in the early 90’s–with “Winona”.

In an era in which the CD overtook the LP as the dominant format, Sweet predicted vinyl’s comeback (by a decade+) by bookending each ‘side’ of “Girlfriend” with faux intro/outros with needle drop sound effects.

“Evangeline” on Side Two adds Big Star to the sonic stew, sounding like an outtake from “#1 Record”. Again, Quine opens up, this time a paean to the Johnny Six character; this is a Side Two triumph with an indelible chorus. “Thought I Knew You” is just Lloyd Cole and Matthew on dueling acoustics–even including Lloyd’s duffed open–but redemption comes in the form of a 12-string attack that propels the song.

What sells this record even more is that the source material was strong enough but Zoo Records thought enough of it to release an alternate version of “Girlfriend” called “Goodfriend”, featuring alternate versions of every song on the “Girlfriend” album. For the better part of a decade, “Goodfriend” was a highly sought-after artifact from the sessions of one of the greatest albums ever made, available only to a chosen few, but in today’s climate of the ubiquity of everything, it’s an easily accessible record almost as worthy as it’s antecedent. If you have never listened to “Girlfriend”, rectify that, if you have: listen to it again with fresh ears, NOW!

Watch the video for title track of Matthew Sweet “Girlfriend” below: