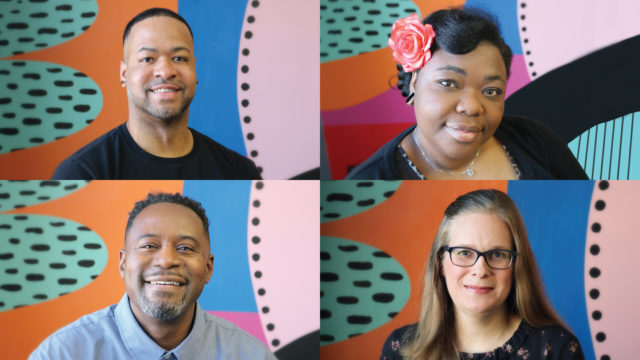 “We are incredibly excited to bring these four unique voices to our airwaves!” Program Director Dori Zori said. “Each new DJ adds another layer of musical perspective to our programming team that will enrich the music we share with Milwaukee.”

Born in Cleveland, Alexander spent most of his life in Chicago and recently moved to Milwaukee. He holds a bachelor’s degree in broadcast communications from Illinois State University and a master’s degree in education from Cambridge College. During the week, Chris works as a scholar advisor for non-profit All-In Milwaukee. He’s also done radio and voiceover work for Milwaukee Radio Group and the University of Wisconsin – Madison. Alexander’s favorite artists include Common, Erykah Badu, Wu-Tang Clan and The Roots.

A veteran of the Milwaukee music scene, Element Everest-Blanks is best known as a former member of the hip-hop group, Black Elephant. Throughout her career in the industry, Element has written and performed songs for major motion pictures, worked nationally as a voiceover talent and created songs for NBA and NFL teams. Her core artists include Nina Simone, Stevie Wonder, MC Lyte and Black Thought.

Anthony Foster is a lifelong Wisconsinite with a passion for hip-hop and funk music. A licensed realtor, Foster is a father of two and active in his community. He has also been an emcee, producer and bassist for many years. His core artists include Nas, Amy Winehouse, Sade and Kendrick Lamar.

Milwaukee native Doris Wessels joined Radio Milwaukee in 2011 as Traffic Manager, and currently also serves as the Underwriting Sales Manager. She has on-air experience in Milwaukee, Chicago, and Lake Geneva in a variety of radio formats. A proud graduate of the University of Wisconsin-Milwaukee, Wessels began her radio career as a teenager. Other accomplishments include singing at Carnegie Hall, completing a sprint triathlon, and volunteer work around the Milwaukee area. Her favorite artists include Brandi Carlile, R.E.M., Liz Phair and Girlyman.