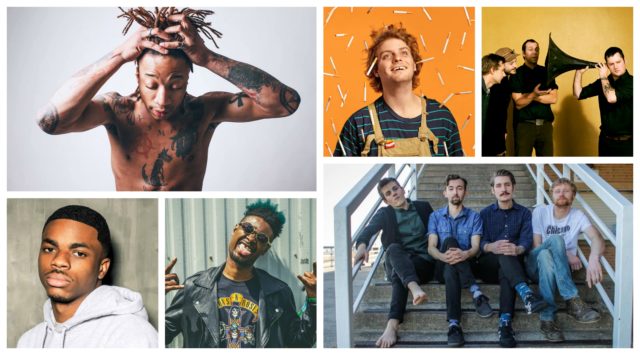 Listen to Whips if you like Bleached and Soundgarden

When it comes to making raw, down-and-dirty rock music, Whips might be the best in Milwaukee. The group’s sound harkens back to the grunge era, with purposely lo-fi production, heavy guitar riffs and sludgy rhythm sections, much in the same way that many bands in this modern “grunge revival” are doing. It is part hard rock, part punk and all aggression, guaranteed to give you a refreshing punch in the face. The badass vocals of lead singer Ashley Smith pierce through these grungy instrumentals and complement them perfectly to create music with a razor sharp edge, that’s just catchy enough to get stuck in your head.

Lorde Fredd33 is a rapper that is nearly impossible to put in a box and compare to other artists, despite the fact that I am doing exactly that. Much like Vince Staples, Fredd33’s instrumentals manage to be so smooth to the ears, yet in-your-face and bombastic at the same time. He does the exact same thing with his voice, using his commanding vocal presence to his advantage. It’s not uncommon to hear Lorde Fredd33 giving smooth bars, wailing aggressive chants, or even embracing his melodic side in his music. He progresses his flow to new heights unlike anything else in hip hop, proving he can trade talented wordplay and fast flows with the best of them, while still showing his prowess as an experimental vocalist in multiple ways.

Listen to Tigernite if you like Joan Jett and Cheap Trick

Tigernite has gained a local reputation in the last few years as the number one source for fun-loving, shredding classic rock. Distorted guitar riffs, speedy tempos and the perfectly raspy female vocals of Molly Roberts all make Tigernite the perfect band for those missing the days of classic hard rock. At the same time, the band always puts a heavy focus on having infectious melodies and hooks that feel reminiscent of the days of power pop. Additionally, their showmanship and glossy appearance would fit right in with glam rock of the late 1970s. Combine heavy instrumentals, catchy choruses and glam aesthetic and you have Tigernite.

Milwaukee rapper Bliss & Alice has shown both sides of himself and his talents with his last two projects. On his first mixtape, ‘Poetry volume One,’ he operates under more organic-sounding instrumentals, similar to a more classic hip hop style. On this project, he proved his insane lyrical talent as a rapper, with poetic flows, clever wordplay and stream-of-consciousness lyrical progression in every single song. On his second project released in late 2016, entitled ‘Mama Tried,’ he takes a completely different approach. With more modern, mainstream instrumentals, Bliss & Alice takes a much more personal lyrical approach, using flows and rhyme schemes similar to what you might hear from rappers like Kendrick Lamar. His ability to not just perform both styles, but do so with incredible talent, proves that he is Milwaukee’s most underrated rapper by a mile.

Like Lorde Fredd33, Soul Low is a band that is really difficult to categorize. The Milwaukee alt rock band has gained local popularity locally since their debut in 2013 with the help of the their instrumental virtuosity, unique stylistic choices, and outlandish vocals courtesy of Jake Balistreri. The band takes elements from both classic and modern alternative rock, as well as punk, surf rock, and even folk music to create something that belongs distinctly to Soul Low. One of the band’s biggest strengths is the ability to go back and forth between happier, upbeat music and sadder, almost anxious music, both through their lyrics and instrumentals. Their 2016 album ‘Nosebleeds’ was one of the best of the year, and their newest single, “Bad Set of Moods,” proved they show no signs of slowing down.

When it comes to getting involved in local music, people often face the problem of not knowing where to start. Hopefully, thanks to this new series of articles, that problem will be long gone. Every two weeks, we at 88Nine will be bringing you Milwaukee music recommendations, based on nationally renowned artists you already know and love. Here is part 2 of our series.