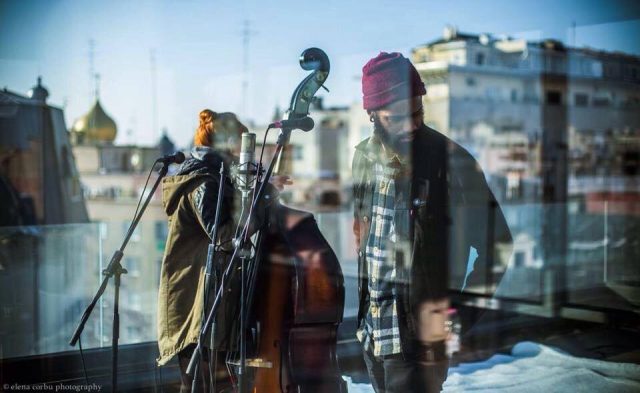 As someone who spent the bulk of my 20s in various corners of the globe, I can’t overstate the importance of travel. Stepping out of your comfort zone, meeting new people, and immersing yourself in different cultures offers a fresh perspective that can enrich your life.

While Nichols and Rose play in various Milwaukee bands — New Boyz Club, Painted Caves, Thistledown Thunders, R.A.S. Movement, Ruth B8r Ginsburg — this was the most extensive touring either of them had done. A month into their journey, Nickel&Rose released their debut EP, “A Place to Call Home.” [Read below for more.]

Nichols and Rose began their adventure in Berlin, Germany. For the first two months, they traveled to major cities in Western Europe. The second half of the tour took them to more remote towns in Eastern Europe.

All told, Nichols and Rose visited seven countries and played almost 50 shows. They shot a video in a tunnel below Hamburg, played a synagogue in Ukraine, did a pop up interview on a Romanian radio station, and went on vacation in Tel Aviv.

In the Israeli coastal city they saw the band A-WA in concert. “They are three Yemenite sisters who play a kind of traditional folk music with these really beautiful harmonies, but over reggae and hip-hop beats,” says Rose. “Everyone should listen to them because they are freaking amazing.”

One of Nichols’ favorite musical finds is a Polish-Ukrainian group called DAGADANA, who “do this really cool traditional Polish music and they mix it with jazz and everything.” The duo managed to record a new 6-song EP at a studio in Berlin with their friend Nick Schroeder, which will be released sometime in the coming months.

I sat down with Nichols and Rose three days after their return from Europe. It was the afternoon following their homecoming show at the Jazz Estate. The duo was still a bit jet lagged, but spoke openly about their journey.

Below you’ll find sections of our conversation transcribed, but you’ll have to listen to the interview to hear Nichols’ lucky peanut story and the first song (“My Old Man”) off their forthcoming EP.

Catch Nickel&Rose this Friday, March 24 at Company Brewing performing at a benefit for Planned Parenthood Wisconsin and Lutheran Social Services.

They will also participate in Wonder UNCOVERED on April 14 at Turner Hall Ballroom.

They will have an album release show on April 20 at Timbuktu.

NICHOLS: We were both playing PrideFest. Johanna was playing with SistaStrings and I was doing a gig with Lex Allen. Well, I think we first met at a New Boyz Club – De La Buena show…

ROSE: Yeah and I think I called you Nick.

NICHOLS: Yes, you called me Nick for like six months.

GRIHALVA: As a fun nickname or…?

ROSE: Nope, I just thought his name was Nick. (Laughs.) But at PrideFest we went on the…what do you call it?

ROSE: Yep, we went on a Skyglide ride and we’ve been hanging out ever since. 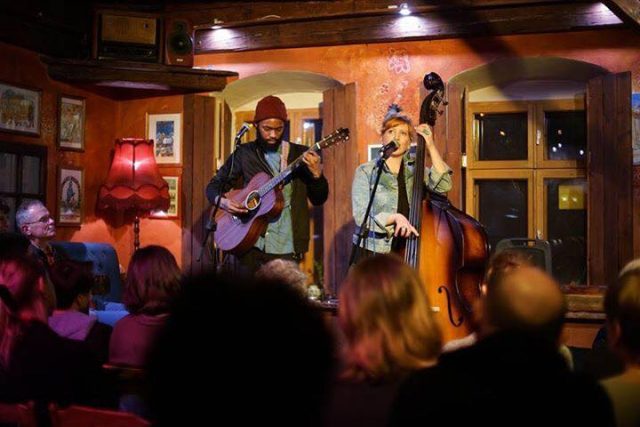 HOW THE IDEA TO TOUR CAME ABOUT

ROSE: Carl was going to go to Kazakhstan. But then we had just fallen in love…

NICHOLS: And Johanna didn’t want to go to Kazakhstan.

ROSE: But I did want to come with you to Europe. So we knew we wanted to travel and we’re both musicians. We started playing together and we were just jamming and it worked out. And then we realized we could travel and play music at the same time. Those goals really worked well together. 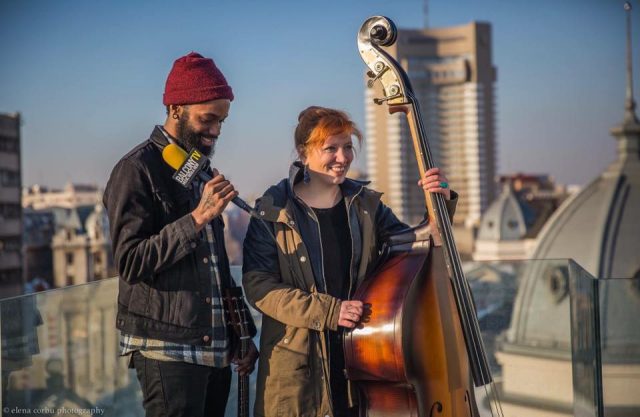 On a shoot for BalconyTV in Bucharest, Romania.

WHY THEY WENT TO EASTERN EUROPE

ROSE: I really wanted to go to Ukraine and see where my father’s family had come from. And then we got a show in Bulgaria, which we never made it to. But we started to look for shows in between and Romania just kind of happened.

NICHOLS: I’d been to Ukraine at the height of their civil war. It seems scary, but then I got there, and I mean, of course there was a war going on, but people were really nice and it was really cool. So it kind of opened my mind to going to places that you wouldn’t typically go to in Europe. And I figured there were people that want to hear our music everywhere, so we should just go there if we can. We got really lucky and found the right people in these countries and ended up staying and playing a lot longer than we expected.

HOW THEY BOOKED SHOWS IN EUROPE

ROSE: We played this really great old jazz club in Bucharest and then the owner, who’s a really lovely man, we became friends and he helped us set up a couple more shows. Then he introduced us to a booker who took us on. In Poland we signed on with Borowka Music.

NICHOLS: That started with going to Ukraine. And we just had this idea but we didn’t know how to go about it. So we sent out a bunch of emails and ended up getting one show in Lviv at this jazz club and from there we were just figuring out what to do with our time in Ukraine and we connected with this artist called Sasha Boole…

ROSE: And we wanted to play a show with him because his music is great and we fit well and he helped us book a whole tour.

NICHOLS: So we had that one show and he booked us six more shows in the Ukraine. Then he introduced us to his manager, who was the guy who booked our tour in Poland. 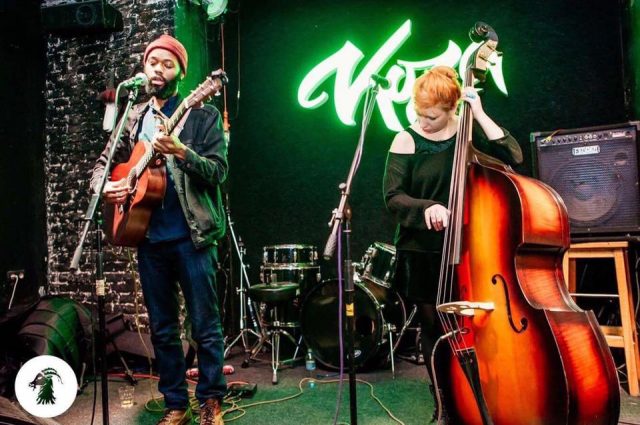 ROSE: The protest (in Cluj Napoca, Romania) was unexpected. From the Facebook page the organizer was like, “Can you bring (your instruments) to the square?” And we were like “LOL” but then we actually ended up playing in the square to 50,000 people at this protest, and we played an American protest song that was popular during the Civil Rights Movement. So that was really inspiring.

NICHOLS: We played a show in this Hungarian town in Romania called Sfantu Gheorghe and then we met these musicians and one of them was a Roma musician from Hungary. He introduced us to the Roma population in that city, so we went to this village and we jammed with these so-called “gypsy” musicians. That was one of the highlights for us.

ROSE: That was amazing, so beautiful, right at the bottom of the mountain. There were these giant tall trees and everyone had a horse in their front yard and the people were just super amazing and inspiring.

I would say one of my favorite shows was playing this really old synagogue in Romania. It was this beautiful synagogue and they were telling me how there used to be a big Jewish population there and now there’s only eleven Jewish people in that town. My father’s side is Jewish and they were Jewish Ukrainians, so that was part of why they left Ukraine, because of religious persecution. And we played this song I wrote about my dad during that show and Carl said afterwards that it felt like my dad was there. And it had beautiful acoustics. It was a nice way to connect to my ancestors. 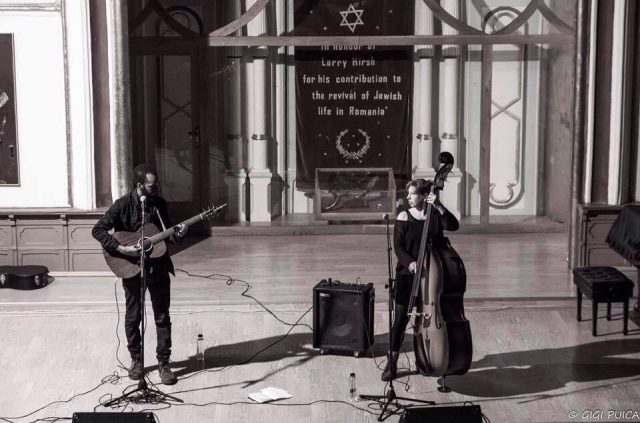 ON BEING (OR NOT BEING) AN AMBASSADOR

ROSE: We were there to learn and see everything we could. I don’t know, I mean, I felt I was more representing humanity, just by trying to be a really kind person. Because we needed help all the time from strangers, whether it was to figure out how to order the food on the menu we couldn’t read or call a taxi. So we had to continuously try to be positive and good people and hope that other people would do that for us.

NICHOLS: It was kind of important for me to not feel like I was an ambassador or representing anything because I didn’t want that weight on my shoulder like, “This is going to represent any particular group of people.” I think that was really important for us to just be people and then we were able to connect with people who had the same way of thinking.

ROSE: I guess we weren’t ambassadors then. (Laughs.)

NICHOLS: We never tried too hard to make the point of where we came from, because we were more there to experience the culture than to bring our own.

Nickel&Rose - Julian from dynocigarette on Vimeo.

ROSE: I think they really understood our music. We play sad music. (Laughs.) And I Google Translated some of the articles that were written about us in Romania or in Poland and they’d say “beautiful, emotional music” or they were like spot on. Even if we didn’t speak the same language as our audience, the message or the feeling of our songs was always received and that was cool. I’d never thought about it, but you don’t really need to understand the words to understand music. 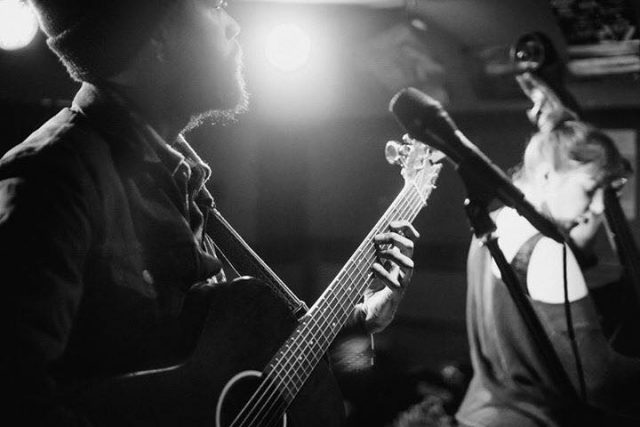 ON THE MILWAUKEE MUSIC SCENE

ROSE: I think you can get lost in a scene and that can be dangerous. It can make people jaded or kind of kill creativity. I definitely recognize that it’s really special here. Really good music is made here. And it is an inspiring place because there’s so much that needs to be done in Milwaukee. I think that’s why we loved Eastern Europe so much…

GRIHALVA: Because it reminded you of Milwaukee?

ROSE: Yeah. But it’s also important to know that there’s a lot outside of Milwaukee too, so things don’t become too big of a deal in your head. It was really grounding to go all over the place.

NICHOLS: I was inspired by hearing music from all around the world and realizing that there’s music in Milwaukee that’s good enough for the whole world. But that was kind of a let down at the same time, because there’s so much good music in Milwaukee that will never really be appreciated for whatever reason. 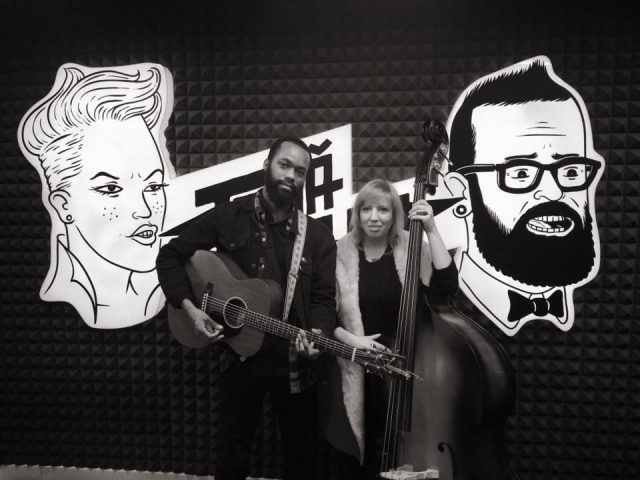 NICHOLS: Before we were wondering what our value was as people, but mostly as artists. Because when you’re in your hometown scene you get a reputation and you have a circle of friends and you can build some kind of following without really, you know, without ever knowing why people are coming to your show. You don’t know if they’re just coming because they’re your friends or because it’s something to do. But going to a place where nobody knew who we were or anything about us, and to come out of curiosity and walk away as fans, that gave me a certain confidence that I didn’t have before.

ROSE: Same. I feel like I know my worth more and I believe in myself more. And I started eating cheese.

NICHOLS: Yeah, there’s not a lot of vegan options in small towns in Romania. 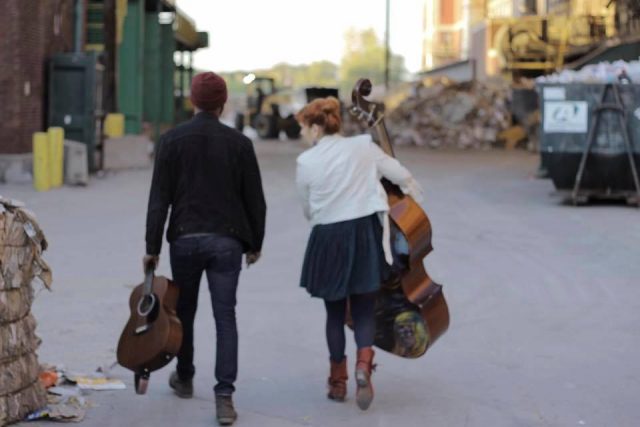