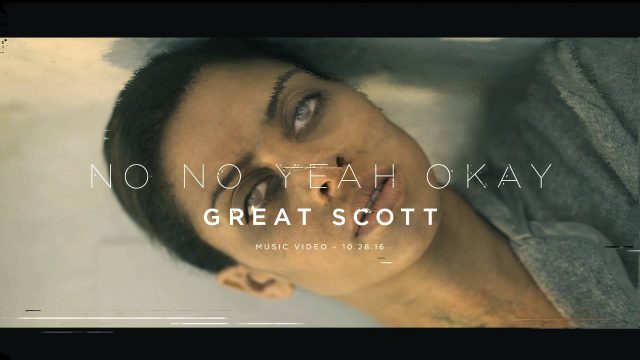 Milwaukee’s No No Yeah Okay won Independent Release of the year at the Radio Milwaukee Music Awards last year for their debut EP “Dual.”

Today marks the premiere of the moving new video for their track, “Great Scott” from Dual starring the band’s producer, Mark Gage. Radio Milwaukee had a few questions for Gage and director Ryan Bilinski about the concept and creation of both the song and video.

Stream the video for “Great Scott” by No No Yeah Okay and read the interview below:

Could you share a little bit about the theme of the song/lyrics?

Gage: When we initially founded the band, there was some time needed to gel and understand how our vastly different musical backgrounds and contributions were going to form into a cohesive sound.

Our initial solution to this was that instead of writing songs to genres, we would try to write songs to emotions and let the lyrical content fall in line; something that could be a shared experience despite our unique backgrounds and preferences of certain genres. It just helped us all rally around a theme. Happy songs sound different than sad songs. It was an easy place for us to start.

So our concept for the ‘Dual’ EP was to follow the evolution of most peoples’ first serious relationship; from love at first sight, to having the relationship stall, problems occur, going through with the breakup and, once its over, reflecting back on the relationship. “Great Scott” is right in the middle of this story.

“Great Scott” is about remembering the reason you are in this relationship, all of the good times that you shared, but also noticing that things aren’t so great anymore… and maybe getting worse. It’s at that tipping point of ‘we’re either going to fight to recover this, or it’s probably best we move on.’

But no matter which direction the relationship is headed, for better or for worse, there is a desire to re-experience the way things used to be. Hence going back in time, hence “Back to the Future”, hence “Great Scott” haha!

“I kinda wish I had a DeLorean,

I kinda want to take a trip,

Back to the way we felt,

Back to the way we felt back then.”

How did you choose the director, Ryan Billinski?

Gage: I’ve spent many years writing and directing music videos for local and national artists. Storytelling has always been my priority with almost all of my videos. Performance videos, animations/effects, and just “cool visuals” certainly have their place, but they all seem like shallow concepts when compared to a video that focuses on telling a really interesting story. I wanted to make sure that whoever was going to direct a video for our band shared that same sentiment.

Ryan Bilinski is a friend of mine who has a ton of great background in film and is deeply passionate about the details of building stories. Every decision and detail is meaningful to the idea he’s trying to portray. There’s no “just set up the camera there and let’s roll”. It’s all planned with intent.

The project had been out for a few weeks and then one day I got a message from him saying that he heard the EP and really loved one song in particular, “Great Scott”. He almost immediately shared an initial concept for the video and I thought he nailed it.

Why does he want to go back? What issues is this couple dealing with? Those questions informed the story and the theme of secrets.

Did you work together on the concept?

Ryan Bilinski (Director): Mark and I had a lot of conversations about what the EP meant and what each song brought to the table. For “Great Scott,” I gravitated towards the lyric “back to the way we felt.” That brought up a lot of questions like; Why does he want to go back? What issues is this couple dealing with? Those questions informed the story and the theme of secrets. – The things we let fester because we simply do not tell each other the truth. That creates the loop for our story and as a viewer, you get to decide where the “Builder” character is ultimately going.

I chose to work on this project because “Great Scott” gave me a ton of visual cues and ideas. – Obviously, there is a callback to Back to the Future, so the idea of a time machine had to be used and we rolled with it.

Is it all Milwaukee actors and crew?

Bilinski: Cody LaPlant (Director of Photography) is such a talent and his name continued to pop-up in conversations with other local filmmakers. – I am not from the Milwaukee area originally, so when you hear great things about the same person over and over, you decide to seek them out. Will Reiland, Alex Moeller, Angela Valeri, Byron Raphael, Wilfredo Ibarra, and Robert Walker are all local designers and VFX artists in Milwaukee who answered the call to get this project off of the ground. – Lucky for us, Mike Alt of Alt’s Antiques was instrumental in supplying an area that suited our needs for the “Builder” and his workshop.

Gage: Long before I ever started creating music, my background was in writing scripts, developing video treatments and directing. I never really worked on the other side of the camera as an actor though. After talking through the concept with Ryan, I felt like this would be a cool opportunity to try my hand at some acting.

I had worked with our starring lady, Natalia, once before on a music video I directed for Klassik’s “Boogie” video. Her personality and professionalism were perfect for this video, so we were excited when she agreed to join the team.

More info on No No Yeah Okay can be found here: www.nonoyeahokay.com