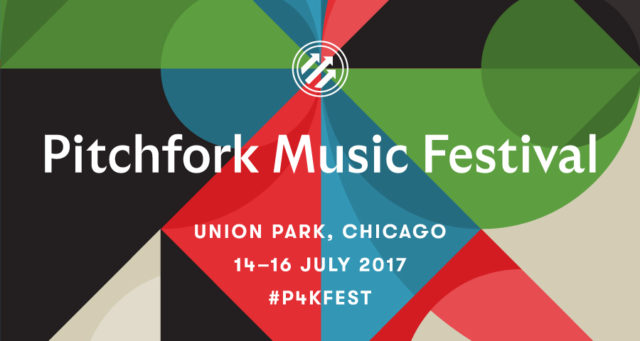 The organization Pitchfork has deemed itself “The Most Trusted Voice in Music.” That is a tall order, to be the most trusted voice in music, but Pitchfork has stood the test of time, expanding, growing, and influencing people’s opinions about music- for better or worse- since 1995. It seems as though everyone who has an interest in music has an opinion about Pitchfork. A lot of people love Pitchfork. They agree with their opinions, they trust their staff writers. I lot of people also hate Pitchfork. They don’t want to read a lengthy article that they perceive as pretentious and don’t want to be told they’re wrong for liking a song simply because it makes them dance.

From both people who like Pitchfork and from people who don’t, it’s pretty common to hear some joking about Pitchfork being produced by and for “millennial hipsters.” There’s a whole slew of go-to jokes about this categorization of people- they’re pretentious, they’re needy and talk too much about their feelings, and they’re too dang politically correct. It’s easy to go along with the assumption that these were going to be the vibes of Pitchfork, but I went in with an open mind to see what Pitchfork Festival 2017 was really all about.

To start, I checked the lineup, which was absolutely stacked. The headliners alone were LCD Soundsystem, A Tribe Called Quest, and Solange. A 2000s electronic band, a 90s rap group, and a contemporary R&B artist who received the Pitchfork album of the year, all performing together at one festival. The rest of lineup was just as diverse, from punk artist Jeff Rosenstock to the funkalicious George Clinton & Parliament Funkadelic. These were good signs. 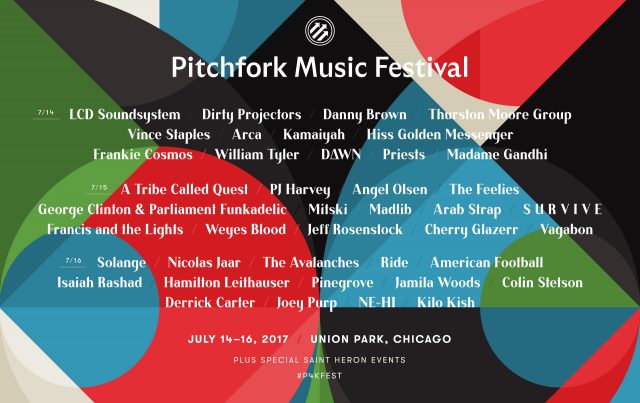 #P4KFest2017 happened this past weekend. Read about it below.

After leaving the office around noon on Friday, Justin and I were on our way to Pitchfork. We got about 10 feet away from the office before realizing that we forgot our recorder for interviews, so we ran back and then we were off, for real this time. We listened to LCD Soundsystem almost the entire way there, sometimes dropping in a song by Danny Brown and once a song by Jacques Brel. We were supposed to arrive at 2:45 for an interview with Frankie Cosmos, but Chicago traffic had other plans for us, which was a bit of a bummer.

When we did get into the festival, though, around 3:00, I noticed some things. The festival set up two main stages pretty close to each other, so if there wasn’t a band playing on one you could always hear music from the other. There was another stage that was a little bit more tucked away past the food vendors and merchandise tent. The merchandise tent was cool because it wasn’t just Pitchfork gear. There were record labels selling tons of records and tapes. Because of how this festival was set up, you would have to try hard to not find new music that you haven’t heard before. This stood out to me a lot.

We made our way over to Vince Staples, but that turned out to be the disappointing show of the weekend. He just seemed bored. All was okay, though, because Frankie Cosmos was great. They were sweet and intimate. The band had choreographed little dance to accompany the frontwoman, Greta. They were also surprised that so many people were there to see them play and expressed their nervousness. It was extremely endearing. 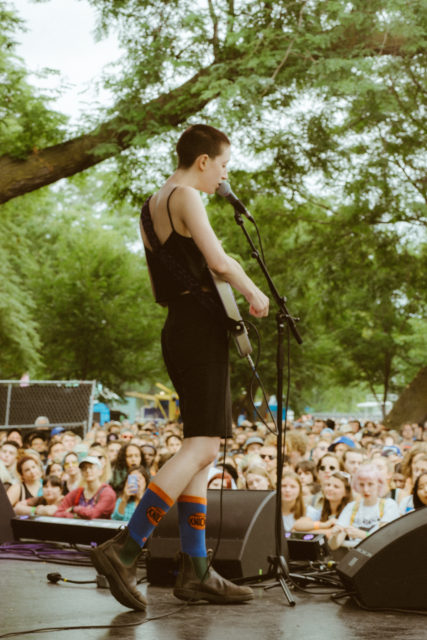 We shifted gears and went over to Danny Brown in the main area. Pitchfork is the type of festival where you can go to a Frankie Cosmos show then follow it up with a Danny Brown show, which is awesome. We pushed up to the middle of the crowd and danced ourselves silly the entire time. Danny Brown is always fun because he has a wide diamond studded smile and always looks like he’s having the best time out of anyone there. When Danny Brown ended, it was a mad dash of people running up to get a good spot for LCD Soundsystem. Naturally, we sprinted, getting up to the second row slightly to the left. We were ready. During the time that we had to wait for LCD Soundsystem to start, we got to hear the Dirty Projectors play their mellow electronic hits.

At 8:10, LCD Soundsystem took the stage. People were jumping, dancing, singing along to every word of their first two songs “Yr City’s A Sucker” and “Daft Punk Is Playing At My House.” James Murphy put together a setlist that had the crowd exactly where he wanted us. You could tell that the crowd was revisiting their memories of each moment ever spent listening to these anthems as they screeched every word. Before “New York, I Love You But You’re Bringing Me Down,” James Murphy asked the crowd if we were doing okay.

But really, are we doing okay? That moment really stood out to me. I watched as the volunteers in the pit handed people water bottles to drink and to spray for cooling off. I felt as though there was such a collective attempt to make sure every person was accommodated, as far as music taste, physical well-being, enjoyment, etc. It was so refreshing. 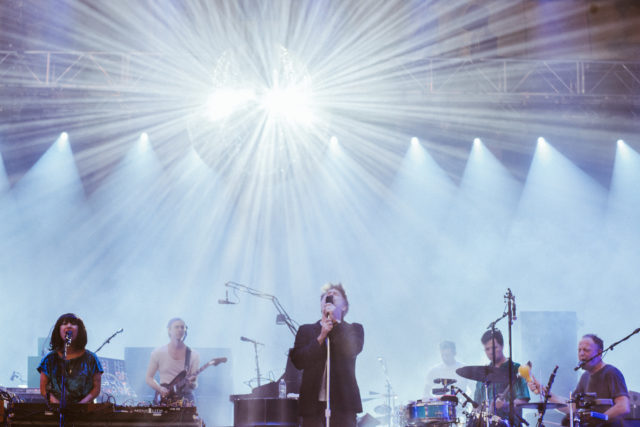 Justin left Pitchfork to go see the National in New York (whatever) and I had some interviews in the morning. I got to the grounds before people were being let in and went over near the media tent. The Field Museum had a little booth very close to ours and the volunteers from their tent called me over to see four baby bunnies that crawled out of their hole and had been gently placed in a box. It was the cutest thing ever. Three employees of Pitchfork who had all access passes and definitely had important things they could be doing were radio-ed in. I watched as they spent 20 minutes trying to figure out what to do with these little babies out of pure concern for the critters. 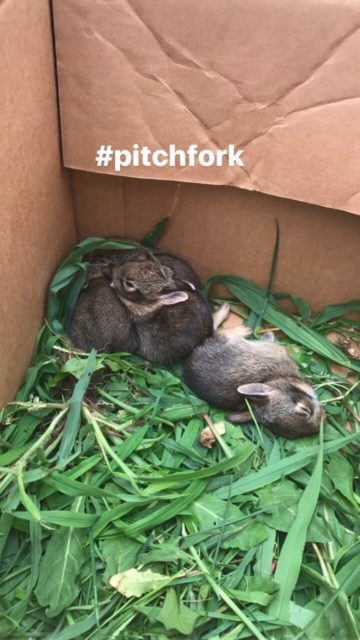 The first show I saw on Saturday was Vagabon. Lead singer, Lætitia Tamko, was incredible and is also an indie game changer right now, being one of the only black females setting an example within indie-rock. I saw Jeff Rosenstock, a punk artist, play right after and he also killed it. He was the only artist playing from 1:45 to 2:25 and it really seemed as though every person at the festival at that time was tuned into his set. Again, only at Pitchfork could someone like Jeff Rosenstock become such a spectacle. He was surprised but rode the energy, putting on an incredible set. That same day, I saw Cherry Glazerr, Mitski, George Clinton & Parliament Funkadelic, Francis & The Lights, Angel Olsen, PJ Harvey, and A Tribe Called Quest. What an insane day. George Clinton & Parliament Funkadelic was an expression of pure joy. People were jamming, dancing, grooving, laughing. It was beautiful. A Tribe Called Quest was also a celebration. Three rappers got up on stage. They commemorated their lost friend, Phife, but they made their show into a party. The moment that stood out most to me was when Tribe did a call and response for “We The People….” Tribe made it clear that we are ALL “the people.” 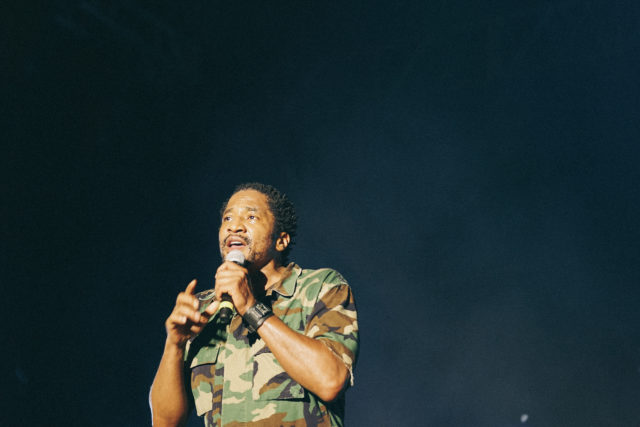 Sunday, the third and final day, began with Colin Stetson, the saxophone player that creates every sound in his songs with his fingering and circle breathing techniques. His music reverberated through the air and people moved their bodies to the rhythms. Another standout for the day was NE-HI. Wherever I was that day, people asked if I had seen and/or heard of NE-HI because their set was so good. At around 6, I was at the green stage securing a spot for Solange, ready for the Avalanches. Unfortunately, they ended up not being able to play, but Jamila Woods was set to take over which was very exciting considering she was previously set to be at the blue, tucked away stage. Jamila Woods took the main stage at about 6:40. Where at first she seemed nervous, once she found her footing, she blew the festival out of the water. She belted out her songs and poems, and for a moment she became the queen of her hometown Chicago.

The minute Jamila Woods ended, set up for Solange began. When Solange came out at 8:40, the audience was eager, hungry, ready for the set. Solange choreographed the whole show so that every movement, every beat was in sync. It was truly a work of art. Solange started with a few songs from “A Seat at the Table,” but made sure to perform songs from “True” and “Hadley Street,” catering to fans that have been there for her at all different points during her career. Solange had some stage banter during her songs, wanting to know who in the crowd “was invited to the barbecue?” She expressed her gratitude to her audience for being with her and allowing her to be doing work that helps make the world better for people of color and for women. Solange, a black woman, envisioned and brought to light every detail of this show and completely dominated a space that has been owned by the indie-rock white dude. She thanked Pitchfork for evolving. She stood out and satisfyingly closed out a weekend that was full of standouts. 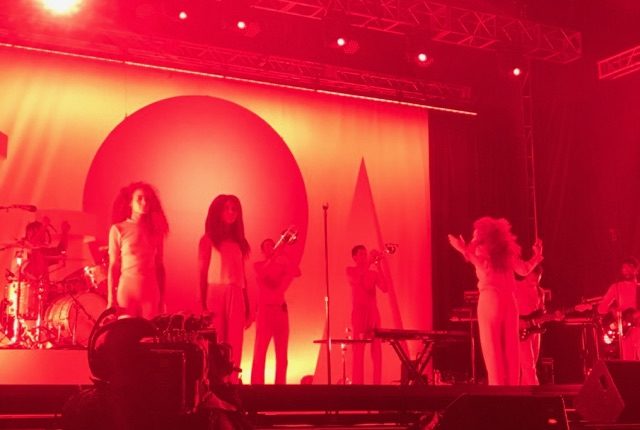 What happened at Pitchfork this past weekend made a couple of things clear to me. This festival was about people enjoying music. Period. Pitchfork went to great lengths to make sure that everyone got to enjoy music and make sure that everyone was, just as Murphy said, “doing okay.” They created a diverse lineup that catered to many, they handed out refreshments and accommodated everyone, even some little bunnies, and they created an environment where no matter where you were on the grounds, you were discovering new music. This festival had me feeling like maybe we should stop making fun of the millennial hipsters, because their attitude, the attitude of caring about people’s feelings, of being “politically correct,” is precisely why this weekend was so enjoyable and got to be about what we all came for: the music. This environment is why I didn’t witness one fight and didn’t see anyone pass out from drugs, alcohol, or dehydration. This environment is why Jamila Woods, Nicolas Jaar, and Mitski all got to be in the spotlight this weekend for people to discover and enjoy. This is an attitude we can all learn from.