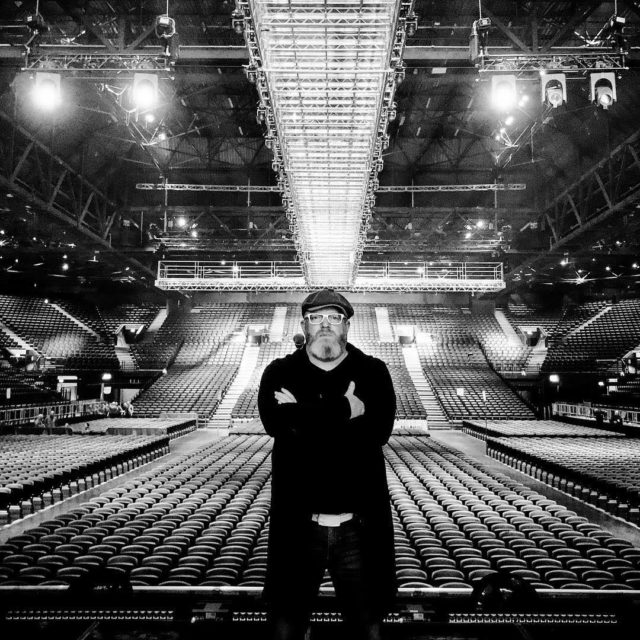 Kevin Sucher is our new executive director here at 88Nine Radio Milwaukee. He’s got over 20 year of music industry experience working with musicians from Milwaukee and all around the world. Here he is taking our lightning round of questions, The Quarantine Gauntlet.

I’m in a bunker underneath the landfill, just north of the Milwaukee area. I’m just totally joking. We’re in River Hills, Wis. Just hanging out by family. My daughter and my youngest son, my middle son, is spending a quarantine with his mother in a different part of Milwaukee.

Do you prefer Google Hangout, Zoom Meeting or House Party for video app?

Right on, the most fun. Have you made a sourdough starter or have you baked bread?

You know, we have struck out repeatedly. We can’t get flour. For whatever reason, flour and the toilet paper seem to be the things that people are kind of taking off the shelves first. I went pseudo aggressive in my last order for the supermarket. I asked for four, five pound bags of flour. I don’t particularly run a bake shop at this point in my life, so I don’t need 20 pounds of flour. With the thought of, “maybe if I were to add four, I’d get one and we got none.” So I have not been able to find any flour to make any bread with yet or cookies for that matter or anything that would require any baking with flour. Noodles.

What’s the best movie that you’ve watched in quarantine?

That is a deep one, because we are movie fanatics in my home. We watch a lot of movies. Oh my gosh, you’re going to stump me here, I think. This is interesting. I’m a huge Star Wars fan. I grew up and I saw the first Star Wars in 1977 in the movie theater when it came out. I’ve seen them all and I believe, aside from the first three that came out in the late-’70s and early to mid-’80s, I saw them all like on night one or the sneak preview of them on Thursday night before it opened on a Friday. So with this last Star Wars movie that came out, I saw it on opening night. My whole family went and I slept like an old person. Like the gray in my beard. I slept, it is the best sleep I can ever get, in a movie theater. I slept and I really didn’t see it. But then I saw the end and I woke up and I was grumpy. I don’t know if I liked it. So when it finally came out on Apple TV where you could buy it and stream it, I watched it and it was during the beginning of the pandemic shutdown and I was like, “Oh my gosh, I missed the boat on this one.” I didn’t think it was all that great and I completely have reversed my feelings on that latest Star Wars movie, so that’s a good one.

I have gone live on Facebook, but that I think will also play into the fact that I’m in my late 40s. I use Instagram a lot, but I think Facebook seems to be where I do my social media damage.

So what have you done when you’ve gone live?

Just recently, we had a whole family karaoke night. I don’t know if you know this, but both my wife and I sing in a really fun tribute act called The Docksiders where we play soft-rock hits of the ’70s and ’80s, classified as yacht rock. So, we’ve got a pretty musical family and we did a live one hour karaoke, pseudo, special with the Suchers about a week ago and we had a lot of fun and we were thinking we might do it again. There’s been a couple live streams where we’ve performed over this little break that we’re in.

What has been or what is your go-to junk food item?

Well, Justin [takes a bite out of a piece of pizza].

As he eats a piece of pizza!

I don’t know if I can fully divulge what I go to. This is horrible. Look at me here. I’m snacking on a piece of pizza that, you know, it’s my, it’s my lunch hour. It’s pizza, probably. Pizza is my go-to junk food.

I typically am a pepperoni, sausage pizza guy. But I don’t hate on the Supreme either. This is a Supreme today, I was feeling Supreme, and we figured why not? Let’s do the all in pizza.

What is the best thing that you have cooked so far in quarantine?

Best thing I think I’ve cooked in quarantine so far is, two years ago for father’s day, I got a smoker and I became an avid fire pit enthusiast and learning and watching a lot of videos on how to control the smoke and the heat and the temperatures. And I even promised the staff that we were eventually going to be coming over to my house when we can get back together again. And I’m going to make a traditional Texas-style barbecue for everybody. I made a brisket that we smoked for 12 hours one day. And man, I’m telling you, from like five in the morning till five at night, this thing cooks. And when you cut into it at 5:30, 6:00, after you let it rest for a minute. It’s like it’s worth all that kind of effort. But we make it a family event too. My daughter will sit and watch some of the logs on the fire every 45 minutes. My wife will help out. I will help out. It’s not the type of thing where you sit for 12 hours and just stare at the fire pit. When you have this sort of time to be away from people, preparing a 12 hour cook like that is a little bit more palatable, if that makes sense.

What is the song that you have listened to the most?

Wow. Actually it’s a song that 88Nine Radio Milwaukee introduced me to. It’s probably “Unchained” by Devon Gilfillan. That, I’m really digging it. I’m really digging the message of that song. That’s probably the song I’ve listened to most, outside of a song I’m working on. My band, The Docksiders, has a single coming out on the 15th of May. So I have spent a lot of time in the studio preparing that song, and I’ve already listened to it to the point where I’m just nauseous.

I think just the combination of all the styles that he pulls from just really hits me at my core as to the things that I love about certain aspects of music. I love how there is this old soul in him. I love how he borrows from some of that old, sort of Philadelphia soul movement in the ’70s. There’s hints of a very modern production, but there’s very subtle hints of a lot of old school sort of aspects to his craft, which I think really appeals to me. And I love his voice. I mean, his voice is phenomenal in my opinion.