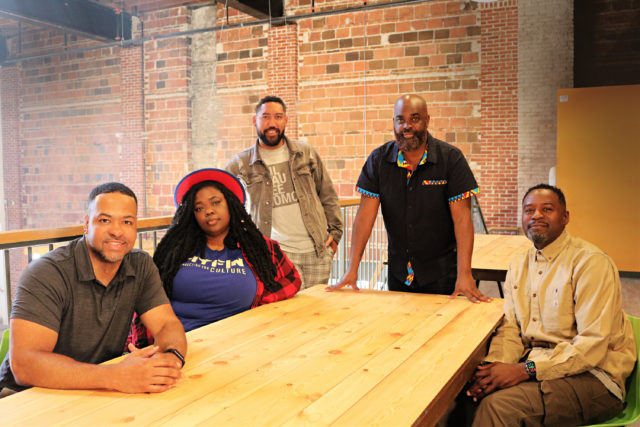 HYFIN’s first hour of music will be specially programmed to reflect the diversity of Black culture. Each HYFIN team member will submit music for the hour and the first song will be by a Milwaukee legend.

“As we’ve said from the beginning, we want HYFIN to uplift Black women and we’re doing that in every way we can,” Moody said.

HYFIN is the newest Urban Alternative channel, an innovative, locally customized public radio format connecting to young, diverse audiences through the full spectrum of Black music. The Corporation for Public Broadcasting is providing initial support for HYFIN with a $450,000 grant.

The new channel will play music from at least two Milwaukee musicians each hour; and HYFIN’s “The Morning Mix” show will also be unique in that it will be unhosted with all music from 6 a.m. to noon.

“In the Black community, we have a lot of morning talk radio shows,” Moody said. ”I wanted HYFIN to be different in what we offer listeners. Maybe you tune in to talk radio for the first part of your commute, but then switch over to HYFIN and get into a good groove for your day. We want HYFIN to be the soundtrack for that.”

In addition to music, HYFIN will carry Radio Milwaukee’s “Uniquely Milwaukee” stories and will also play a selection of multicultural archival stories. HYFIN will also have its own arts and entertainment news segment called “The Grapevine,” hosted by DJ Element Everest-Blanks.

The channel also has a confirmed partnership with the ALIVE Podcast Network. Operated by Angel N. Livas, ALIVE is the only Black woman-owned interactive podcast network to offer programming across all major podcast platforms in the country. HYFIN will carry segments of ALIVE’s upcoming biotech podcast on-air and will have feeds to stream ALIVE’s podcasts on its website.

HYFIN will begin airing in its fully hosted format on Monday, July 4. On weekdays, Anthony Foster will be on-air from 12 to 3 p.m.; Everest-Blanks will be on-air from 3 to 9 p.m.; and Moody will host the 9 p.m. to midnight shift, which will air on both 88.9FM HD1 and HD2.

Listeners can stream online at hyfin.org and via the 88Nine and HYFIN mobile apps. HYFIN will broadcast on-air at 88.9FM HD2 and will be simulcast on 88.9FM HD1 from 9 p.m. to 3 a.m. every day.