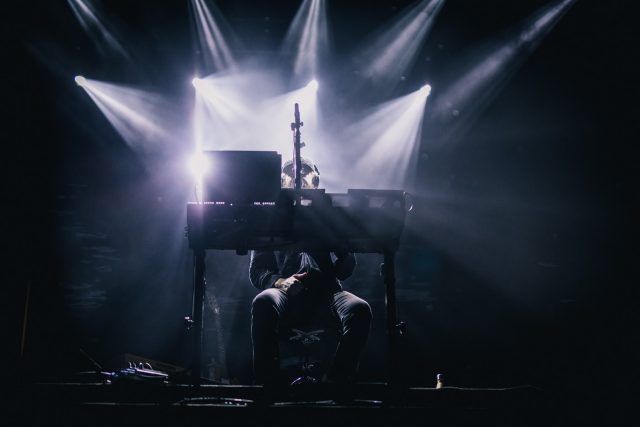 For those of us who still respect the record, that first listen is sacred.

Some of us have rituals; in college, my friend and I would play a game of chess while the new Lupe Fiasco or The National or whatever album unfolded. Sometimes I’ll go so far as to avoid any singles before the full-length is released. A first listen should warrant a good set of speakers or at least headphones.

It’s very rare that a record debuts in front of thousands of people. But that’s what Justin Vernon chose to do with the third Bon Iver album last night at the Eaux Claires Music & Arts Festival.

“Yeah, playing it live for the first time,” Vernon says in between the set. “Cool idea…maybe.”

(Read below for more.)

The thing about first listens is that they’re never enough to fairly judge an album. Great records tend to require at least three digestions. I didn’t love Kendrick Lamar’s “To Pimp A Butterfly” after the first listen. Or Frightened Rabbit’s latest effort, “Painting of a Panic Attack,” produced by Eaux Claires co-curator Aaron Dessner. But after multiple spins the layers unravel and the genius presents itself.

All that being said, here is my track-by-track review of the new Bon Iver album, as performed at Eaux Claires 2016.

The opening track of the new Bon Iver album, which I guess is titled “22 Million,” based on festival narrator Michael Perry’s parting words before Vernon takes the stage, begins with a vocal sample.

Vernon sings this line later in the song and it ends with a Chipmunk-voice effected version of it. What might he be referring to? His career? The festival? A relationship?

Vernon’s lyrics have been the subject of much scrutiny. Some consider them indecipherable gibberish, while others marvel at their depth and poignancy. I make sure to include a few lyrical nuggets throughout this review.

Guitar is the second instrument added to the opening track, followed by drums and a sweet, sweet saxophone. There’s an ’80s vibe hanging over the first day of the festival and you can feel it in that sax. It provides a through line from the song “Calgary” off Bon Iver’s last album.

The second track kicks off with an uptempo drum beat. I’m distracted by Gene Hackman’s face behind Bon Iver on the big screen, what I assume to be clips from the film Hoosiers. This track has some seriously heavy bass. Vernon peppers in disjointed electronic effects.

Last year at Bon Iver’s Eaux Claires performance Vernon was off to the side and standing most of the time. This year he’s sitting dead center, wearing a white t-shit, bandana around his neck and a black cap. As the second song comes to a close I’m excited to see more members of his band walk out and pick up their instruments.

The third track is minimalist auto-tuned poetry, the takeaway lines being, “All I’m trying to do is get my feet up from the creek.” Then, “Turn around now, you’re my A-Team.”

The fourth track comes in swinging with upbeat piano chords and voice samples Vernon has layered rhythmically. After the beat drops, courtesy of a pair of drummers, he says something about, “Staying at the ACE hotel.” The end of the song elicits a “Wooo!” from Vernon.

The fifth track serves as a come down from the high energy of the previous song. It starts with keys and a folky guitar. This is familiar territory; Bon Iver’s signature indie-electro-twang. I catch lyrics about “hallucinating clouds, snow shoe (something),” and “I threw the neon out the door.”

Vernon announces that is the end of Side A.

Side B, the sixth track, begins with a metronome beat and light horns, adding a nice shaker and drum combination. It’s my favorite song so far. I have a flashback to standing in the same spot at last year’s festival when The National was playing “I Need My Girl,” and my girlfriend and I turned to each other simultaneously for a kiss, which we’ve laughed about since. Right as I’m having this flashback Vernon says, “we laughed about it.”

The seventh track features a female voice, but I can’t tell if it’s programmed or someone onstage. Vernon is playing the drum sampler now. It’s hard to imagine this is what will be on the recording, as there is excellent, extended jam between Vernon and the drummers.

As the eighth song starts the horn players have moved behind Vernon, who he later refers to as, “The Sad Sax of Shit.” I notice Milwaukee-native Nelson Devereaux over Vernon’s right shoulder. Minneapolis-based Devereaux is known for his work with CATSAX, who play Eaux Claires on Saturday, but also for a collaboration (“Milwaukolis”) with Cody Steinmann of Rhythm Changes.

“I’m standing in the street now and I’m carrying his guitar and I don’t know (something)…but I know I’m going in,” Vernon sings. And does he and the band go in! This song has the biggest, most lush sound so far.

The ninth song is essentially a duet between Vernon and one of the saxophone players. Drums come in eventually but they don’t hit hard. “I been caught in a fire, I stayed down…I don’t know what truth is,” sings Vernon.

“Thank you for being here,” Vernon tells the crowd before bringing out his friend Sam Amidon, who instructs us to take out the orange “hymnals,” aka the festival booklets, and turn to the back. This song is called “1000000, A MILLION,” and all of the lyrics are in the booklet. We are invited to follow along and sing the hook, “where the days have no numbers.” Vernon is playing the piano and Amidon and (a portion of) the crowd sing along to the album closer.

The sing-along is a far cry from the twenty thousand plus who belted out “Skinny Love” last year at the end of Bon Iver’s Eaux Claires set. But that comes with the territory of performing new music live; you lose the inherent enthusiasm for the familiar. We haven’t had the chance to attach our own emotional memories to the songs. Playing new music live can be a rewarding, revealing exercise for the artist, but for the audience it tends to fall short of a “greatest hits” type set. However, when the Eaux Claires audience listens to the recording of the new album, we will all have this shared memory.

It reminded me of when I saw Poliça at Cactus Club in the winter of 2015. Though their notoriety warranted a larger venue, they were intentionally touring small clubs to run through new material before recording it. Getting a first listen of songs that may evolve and change before they’re released is exciting and interesting. But Poliça’s set a few months later at Eaux Claires 2015 was a much more satisfying experience.

Last year at Eaux Claires my girlfriend commented that Justin Vernon, who had an assortment of machines on hand, seemed to be moving in a more electronic direction reminiscent of Sylvan Esso’s Nick Sanborn. With the two drummers at last night’s performance there were moments that sounded somewhat like Poliça, who perform with a pair of drummers.

Considering the Eaux Claires festival is an extension of Vernon’s circle of musician friends and collaborators, and that the festival brings them closer together, it’s not surprising that their influence might find it’s way into the latest incarnation of Bon Iver. The audience response was positive and his fans now eagerly await that intimate first listen of the recorded version of the new album.