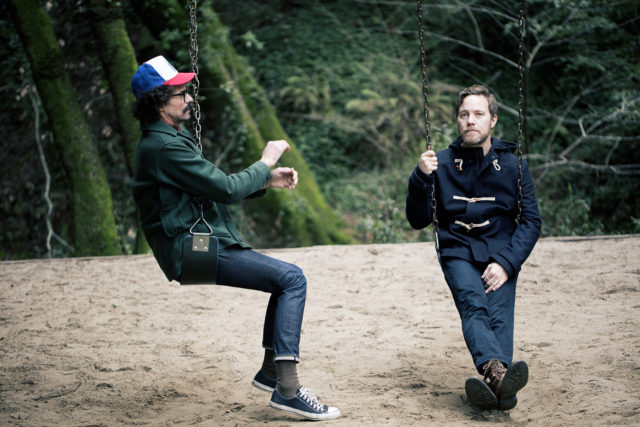 Read on for a recent conversation with Rogue Wave frontman Zach Rogue with Radio Milwaukee, and stream the full album!

Thirteen years after the release of “Out of the Shadow,” Rogue Wave returns with their sixth studio album, “Delusions of Grand Fur.” Zach Rogue and longtime bandmate and drummer Pat Spurgeon have worked with various producers over the years, but have struck out on their own for the first time — recording and producing the entire LP themselves.

The complete creative control has added a fresh and powerful energy to the release. From experimental percussion played on old office equipment to electronic elements, Rogue recently chatted with Radio Milwaukee on hip-hop inspiration for “Delusions of Grand Fur,” the insecurities of songwriting and the process of recording the new album.

Stream the full album below the interview:

How did you get into music?

It started when I was an adolescent. I would go into a dark place of fear, frustration and isolation and I found that music helped me feel balanced. I had this place to go in my mind that made me feel like I could cope, a coping mechanism. Rather than something medicinal or some drug, music kept me somewhat sane.

I got the bug to write around 4th or 5th grade. I didn’t realize until I was out of college that I was actually doing songwriting. I didn’t think I was actually writing songs, because I worshiped bands. I was obsessed. My walls were covered in posters of R.E.M. and the Cure and the Smiths. I was so enamored with bands, I so badly wanted to live in their world that when I was writing, I didn’t realize I was writing music. It wasn’t until much later when I was recording on a 4-track that “oh, that was the creative process.” You can actually take it from where it is in your mind and express it in the recorded format. I know that sounds ridiculously obvious at this stage when I say it, but it was always just what I would think about when I was sad.

I wish when I was younger, I let it come out a little bit but I didn’t have that sense of self-awareness.

Did you feel you weren’t worthy of making music? How did you actually start recording?

Yeah, oh my god. When we signed with Sub Pop, our first tour was opening for the Shins. That was a band I was into, I really, really liked their music a lot. We were playing festivals and meeting people in bands. I will say, it was actually kind of hard for me. I felt like I was in someone else’s life.

Rogue Wave wasn’t really ready yet to tour, we needed more time to learn how to play live. We were thrust into a situation that felt premature.

Emotionally, I just felt like I wasn’t worthy of being in the presence of all these people I respected so much. I didn’t feel like I was part of the club.

Were you were afraid you were a hack, or were you feeling humble?

Absolutely I felt like a hack. Like I got in on some sort of technicality. It still feels that way. I come across people all the time, even our own guitar player Jon, or our drummer Pat, I feel like, “those guys are actual musicians.” We had Mike Deni from Geographer come and harmonize and the record and I was like, “Dude, that guy is an actual singer.” He knows technique, born with this beautiful voice he’s crafted and honed into this amazing instrument.

I think most musicians have insecurity. Maybe John Lennon was a self-proclaimed genius, but most of us are operating on some level of insecurity. I find comfort in that.

We live in a hip-hop era. It has started to inform me.

It’s easy to fall into playing a pop structure because it feels like you’re supposed to. Like this part goes here, now we go to the chorus. A lot of people get stuck in that box.

I think so. I’ve been listening to a lot of hip-hop the past couple of years. A lot of modern, progressive hip-hop right now is so exciting. The choices they are making from a structural standpoint are really unusual. Even some huge artists our there like Kendrick Lamar – just listen to his two records and that new b-side untitled one. Even if you take away his lyrical sophistication – which is breathtaking, it’s unique in terms of production choices. Earl Sweatshirt I really like also, he produced his records. He does stuff with Vince Staples and I like Vince Staples a LOT. His music really inspires me. I love what is being said and how it’s being said, but also these really strange decisions made in production — it’s such free music, it’s so open.

Do you think hip-hop has more freedom structurally?

Yes, very much. In terms of songwriting, yeah, anything goes. There’s that Frank Ocean album you could argue is more like soul music, but if you listen to the kinds of layering that’s happening, it’s pretty exciting. I look to it. We live in a hip-hop era. It’s definitely started to inform me in terms of the excitement level.

“Delusions of Grand Fur” has a lot of styles from track to track; from lush analog arrangements to colder electronic elements. Was this the result of producing it yourselves?

We did a lot of mixed-media. There are some things we did in the computer, some we did on reel to reel 8-track tape machine. There is some stuff sang into an iPhone, it’s all across the board. That’s what we were doing on our earlier records. We were mixing media, we were mixing analog and digital, trying to create a depth of field that was not flat, which you can get sometimes with pure digital recordings.

We take modern stuff and really old, antiquated stuff, too. On “What is Left to Solve,” you’ve got this dark ambiance with synths and drum machines, but also Pat is playing drums on this metal cabinet that we keep our mics in. We play with high and low-fi and make them work together.

Listen to the Rogue Wave track now playing on 88Nine – “What is Left to Solve”: