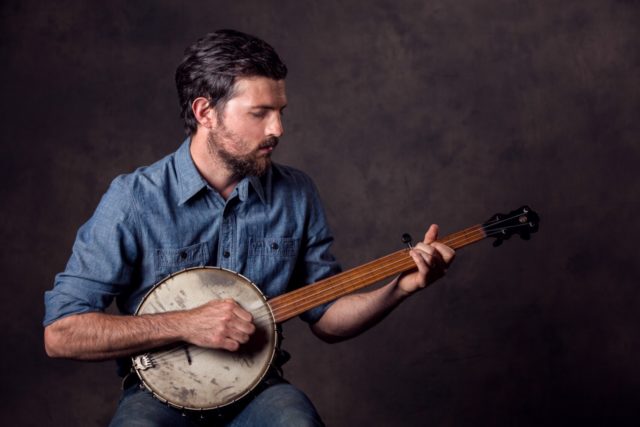 talks Leo Tolstoy, reading his grandpa's sermons, and his own spirituality in this surprisingly candid interview

The Avett Brothers are in town tonight at the BMO Harris Pavilion. In this interview Scott Avett gets surprisingly deep about his personal beliefs, his family’s history, and looks in depth at a couple of his songs. Please listen to the full audio at the top of the page, or read at your leisure.

Justin Barney: You are coming to town tomorrow, and we are excited to see you. Right now we are playing the song “Ain’t No Man” and it has such a killer bassline and it’s so straightforward and simple. How did you do the instrumentation on that song?

Scott: Sure. I wrote the song in 2005 or 2006. And it sat on one of my recording devices for years and we were in the studio doing demos and it kept coming up. I think that I had taken years to convince myself that I believed, or had lived long enough to believe in the chorus. And one day I woke up with this bassline in my head and I mouthed out to Seth. My fingers weren’t enough to do the work, so I mouthed it and that’s how it happened.

Justin: And how did you resist not doing anything over it?

Scott: Seth and I thought the seven of us, with no instruments, could perform this on the street. And that needs to be held onto. Because if we add instruments it will become a blues, or a rock song and we’ve always existed outside of those categories.

“One of our key elements of our band is being undermanned and under equipped. Because that strive, that reach, to do something that seems just slightly impossible is what we’ve always been about.”

Justin: Was that song written directly to someone?

Scott: Yeah. I don’t remember the exact event but I remember feeling constrained and restricted in a way that really bugged me and a way that I didn’t like, the way its dealt. And I know at the time thinking, well you know, I can feel one w ay and everybody there’s different levels of being limited, and unjust things that happen. But its relative in a lot of ways and everybody can relate to that at some point no matter who you are.

Justin: Do you remember the specific person or event you were writing about?

Scott: No, I just remember it was in the industry. It was early going into the music business and I remember feeling like whatever I do it was about this instead of that, and then going, “That’s not acceptable.” It was usually like this show should be about the art on the stage and the gathering of the people. This is about inclusive experience every night. And there are little bits of negativity, like wait, is this all about beer sales? Or just about ticket sales? No! I resist that. I will not accept that. And it has never been about that for us. It’s always been about that kid thing. That 15 year old looking up and saying “I want to do that.” It’s hope.

“That 15 year old looking up and saying, “I’m going to do this, I wanna do that” and it’s a dream. Its hope ultimately”

Justin: In the song “True Sadness” you say that no one is fine, you’ve got to take the time, peel back the layers, and you’ll find true sadness. That’s a sad line. It’s a heavy hitter. You know I think that sadness is an underrepresented feeling in music. And I was talking to my friend the other day, we were DJing a party and people were dancing, and my job is great, I talk to bands I love all the time, but I still have this weight on me. And I’m still lonely.

Scott: Right, right. Well, there are so many names for this, and they funnel down to one thing for a lot of people. There is so much mystery in music and art. This is where I’m very excited to be part of something that flies above the realist approach of politics. Our shows become something that flies above it. We see people of all types, of different beliefs, that come together for a moment. And we’re part of that. It all comes down to this mysterious element. You can call it spirituality, you can call it faith, you can call it a mystery, you can call it spirituality. Without that faith in something, that loneliness can get really big. I believe that that faith can be in another person. You know, as temporary as that can be, it can be really, really wonderful.

With the true sadness thing, these things that we have to face are just always lurking. They can be just bombs on our lives. We’re not veterans, we’ve just seen some stuff that wake us up.

Justin: In that song you talk about the kingdom of God. What role does religion play in the music that you make?

Scott: That’s a reference to a book about Leo Tolstoy, called “Kingdom of God.” Really, although I’ve read the book, I’m not qualified to quote it because it’s been a little bit and it’s a very complex book. But I will tell you about how Seth and I both got to that book. Our grandfather was a Methodist minister, he passed away in 1976, six months after he baptized me.  He was, in the 40s through the 70s, a very progressive and liberal-minded Methodist minister because he championed Martin Luther King, he championed Ghandi. In the south region of Rural North Carolina, that was a very brave, bold place to come from. You know? In the 40s and 50s, that was amazing. What lead me to that was reading his sermons – we have many of them. Then lead me to reading Ghandi’s autobiography. And in Ghandi’s autobiography he said, “Leo Tolstoy is the only man that convinced me that Christianity was rooted in good.” A lot of that conversation was based in pacifism and where Leo Tolstoy came from with that. It’s problematic when you get involved in that but my point is, our grandfather was a minister, our grandmother played piano in the church. He was a pioneer and a cavalier in many ways. He threw it out there an was not afraid to ruffle feathers. Not that he was obnoxious about it – not at all – he was a gentle man. His writings are brilliant. And what they are is a perfect mix of intelligence and the Blue Collar life.

Scott: It is. His name was Clegg Avett. Go to cleggavett.com. There’s a book, it’s just a group of his sermons. I don’t sell many of them but they go towards a scholarship of his and I’m not even trying to, you know, I’m just putting it out there.

Scott: It’s pretty great. And they’re just these sermons and they’re dated. My uncle actually put them out in 1978.

Scott: Growing up, we saw the book on the shelf. You just thought, “Aw, that’s just my grandpa.” You know? “Let’s go play basketball or something.” But, I would say six years ago I just really dug in and was like, “I gotta make this available to the world again.” So, might have been probably 2010 or 2011, I put that website up just to say, “Hey, it’s there. I’m not gonna throw it out there, but if people find it, great.” It just lead me on a journey of reading that has lead me to many people and very different takes on where spirituality lies. Music and art, it all works together and we all articulate it in so many different ways. It gets me really excited to think about.

Justin: What do you believe right now spiritually? What are your ideas?

Scott: (Laughs) Oh, wow, well… I believe in compassion. I believe it’s important to have faith in something. I think that people get caught up with how another person articulates it and they want to tell that other person how they’re right or wrong about it and I think that’s unimportant. If you go back to the song, “The Kingdom of God is Within You,” I think it is a very individual thing. At the end of the day, this goes back to what you were just talking about. You could do a lot of things. You could go to big shows, you could go to athletic events, you could go to church, you could go to work, you could take long walks in the park… and at the end of the day, it’s likely – even if you’re with someone you love – that person falls asleep, and there you are alone. And at the end of life, obviously, you do that alone as well. At the end of the day, it’s you and somethin’. It is. There’s no way around that. I don’t know, and at the core of that, faith in somethin’ turns into faith in another person. I think from there you grow. I think you grow into families, which grow into communities, which ultimately grow into humanity. The faith in somethin’ is a key start to everything. As humans, we get really judgmental, you know, we just start wanting other people to do it like us. It’s such a slippery slope.