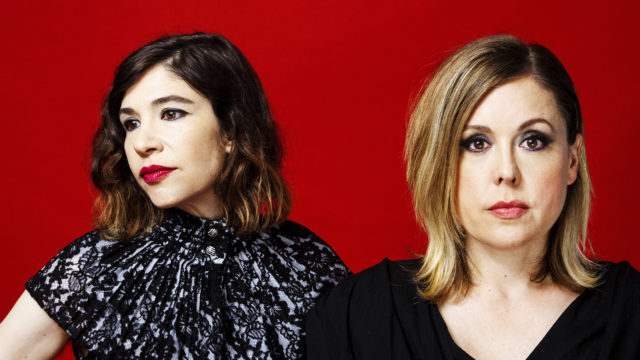 Sleater-Kinney got a new beginning a few years ago. In 2006, the trio — guitarists Corin Tucker and Carrie Brownstein and drummer Janet Weiss — announced a hiatus, after half a dozen albums that had made it one of the most respected and beloved rock bands around. In 2015, that hiatus ended with No Cities to Love, a comeback record whose warm reception was a reminder that the band’s influence had only grown in its years away.

The new album The Center Won’t Hold, out today, is a fresh chapter of its own. It introduces new song structures and strange new sounds under the guiding hand of producer Annie Clark, long known for playing the studio like an instrument in her own music as St. Vincent. But it is also the end of an era: In July, with recording complete and the release date weeks away, Weiss announced her decision to leave the band.

Tucker and Brownstein, who started Sleater-Kinney together in 1994, are continuing without her, beginning with a tour of the new album this fall. They joined NPR’s Rachel Martin to discuss the ups and downs of creating The Center Won’t Hold, whose songs cast an uneasy gaze on technology, social media and present-day political discourse. Hear the radio version at the audio link, and read more of their conversation below.

This interview has been edited for length and clarity.

Rachel Martin: There’s always been a political element in your work. A lot has happened in this country since 2015, when your last record came out. Did the social upheaval of this moment make the lyrics come easier? Or, because everything is more complicated now, was it harder to conjure them?

Corin Tucker: The past few years have been really tumultuous times in America; it’s been hard, I think, for women to feel respected and valued in our culture. We definitely were feeling that, as writers and artists. But we really wanted to give ourselves permission to just make something that satisfied our own needs for expression, without worrying about what people expected from us, or wanted from us as a band. It was more about, “Wow, we really feel the need to be creative right now,” and that we’re not going to hold ourselves back in any way.

Carrie Brownstein: And I think it is our job as writers and artists to ask questions, not necessarily to prescribe answers or solutions. It’s our job to kick around and wrestle with things, and hopefully, through our own seeking, allow a listener to feel seen and heard.

As we were writing the album and recording it, there was a sense that we were in uncharted territory. There are not a lot of all-female rock bands who have stood on this precipice, making their ninth album. We’re all a little older now, and it feels like a sonic space that has yet to be filled, stories that have yet to be told. I think there was a freedom to that as we started to unveil the songs and to explore them in the studio. It was a lot of letting go, a lot of not holding back — and then hoping that we were laying down tracks behind us for other people to follow.

Corin, you mentioned expectations that people may have for what a Sleater-Kinney album is. Carrie, you were actually quoted in The Guardian saying, “If people thought Sleater-Kinney was gonna put out some loud, anti-Trump record, they would be misguided.” Do you think that’s what your fans expected of you?

Tucker: I mean, maybe some of our fans. But I think that what we’ve given them is actually a broader narrative, with many different characters that are all dealing with catastrophe and despair in different ways: Some are mourning, and some are reveling in the corruption. For us, it was more meaningful to feel all of these emotions, instead of just coming up with a mission statement or a slogan.

Brownstein: And I do want to be clear that Sleater-Kinney’s very existence is an anti-Trump statement.

Say more about that.

Brownstein: Sleater-Kinney is a band that came out of the mid-’90s punk scene in the Pacific Northwest on the heels of the riot grrrl movement, which couched feminism in the context of punk music … and it was definitely very anti-corporate, anti-commercialism. It was punk in all the ways that punk exists as kind of moving against the status quo. There’s a lot of that that still courses through this band, in terms of thinking about politics. We don’t feel any need to do music if it doesn’t push back against something. The stakes always have to be high; there is no reason to get onstage and not have something to say.

But in terms of this current climate: It is hyperbolic. It is bellicose. There is a level of anger that has been adopted by some very extreme people. That vernacular, to us, has become its own form of toxicity. So with this album, I think we wanted to … address the ways that people are subjugated and oppressed, but without that yelling. I think anger is a really important tool; I think the way that it’s used can be very divisive. And I think this album is more about searching for little moments of hope.

Corin, you mentioned the word “despair” as something that runs through the music. On this album, some of that despair relates to technology and how it affects us. The song “Can I Go On” is pretty self-explanatory on how technology can be toxic: “Everyone I know is tired / Everyone I know is wired / To machines, it’s obscene / I’ll just scream till it don’t hurt no more.” But you also have a song called “Hurry On Home,” where the video takes the form of a series of text messages.

Maybe this just exemplifies all of us — how you can, on the one hand, understand what’s bad about the technology in our lives, and at the same time clearly derive creativity and inspiration from it.

Tucker: I really think we’re just on the verge of understanding the consequences of our relationship with technology, with social media, with those little screens that occupy so much of our time. I think there are some really negative aspects of it: It shortens our conversations with each other, and brings out a real antagonistic element. So maybe the album is asking for us to reevaluate our relationship to technology and say, “Is there a better way to do this?”

Brownstein: I think where I feel empty is in the space between hitting send, or posting, and then realizing that I have now set myself up on this very tiny stage and I’m waiting for all of this applause. I just think, “How have we all gotten to this point in our lives where every aspect of it is a performance?” That, to me, feels very dark. And I think there is a loneliness that comes from standing on a stage every day, waiting for applause. How could we not feel empty there?

But you guys signed up for that anyway. I mean, you actually do that: You go onstage and wait for applause.

Brownstein: Exactly. I mean, social media, to me, is the karaoke of the Internet.

What does it say about me that I love karaoke, though? It’s so great.

Brownstein: [Laughing] It is, but it’s just simulacra: All we’re doing is going through the motions. There’s a very momentary fulfillment there, and then there is a deep, deep emptiness. I mean, you read articles all the time that people are more depressed, feel more isolated, in relation to this stuff. It should be making us feel seen and less alone, but it seems to have the opposite effect. So I don’t have a specific example, except I have an example every time I post.

Annie Clark, aka St. Vincent, was the producer on this album. How did that change the experience of recording?

Tucker: Working with Annie was amazing. From day one, she came into the studio with about a hundred ideas, a million miles a minute. She has a very fast brain … and a vast knowledge of synthesizers and keyboards, and she had a lot of different things for us to try in that direction.

When we came in for the first session, we worked on the song “Ruins.” We really wanted it to be this kind of catastrophe setting. And she just amplified that whole idea by using this corrosive, disgusting, broken synthesizer underneath the song. Like, it was literally broken — she didn’t choose a fancy, updated synthesizer, she chose a gross one. But it was perfect: It was the sound of corruption and chaos. I mean, she got the song right away.

Before I let you go, tell me about what’s behind the song “Love.”

Tucker: That song really goes through the story of our band: It talks about the relationship that Carrie and I have had, and the journey that we’ve been on for 25 years, and the ups and downs of being in an indie rock band. It’s meant to have a sense of humor, and not take itself too seriously, but is a song about love. It’s platonic love; it’s love for your collaborator and your friend and the music that you make together, and the willingness to just throw your lot in with this other person in life and go for it. It’s a really wonderful relationship to have.

Does it feel strange not to include Janet Weiss’ name when you’re talking about that?

Tucker: Yeah. It’s sad that she’s left the band. But we have a great respect for her and the time that she’s joined us in this band, and we wish her well. Also, you know, the story of the band was started a couple years before Janet joined us. We’ve been on quite a journey, Carrie and I, to make this music together, and we’re very much going to continue to do that.

I know you don’t want to dwell on it, but do you understand the reason that she gave? She released a statement saying the band is heading in a new direction, and so it’s time for her to move on. May I ask how you interpret that?

Brownstein: You know, we really wanted her to stay in the band. We asked her to stay. I think that it’s hard to do anything for almost 25 years; any relationship that has lasted that long is one with the normal vicissitudes and struggles, highs and lows. So all I can sort of interpret from her decision is that she was ready to do something else. And I have to respect that, even though it’s hard.

Ironically, we made this album called The Center Won’t Hold, which speaks to things that we rely upon falling apart and changing. And even though it’s hard for us, and I think it’s hard for some of our fans, you can’t look out into the world and find something that existed 25 years ago that is existing in its same form. Things change and evolve. I think Corin and I just feel so lucky to do this — we really need this band — that we will continue without her. And her playing on this record is immense, as it always has been. We’re excited for people to hear that; I think Janet’s contribution to this record is really crucial. And we’re also excited for the next chapter. If you’re lucky, you get a next chapter, and we will embrace that in whatever form it takes.

Stream The Center Won’t Hold below.