Summerfest to give away 50,000 tickets to their 50th anniversary

Summerfest to give away 50,000 tickets to their 50th anniversary 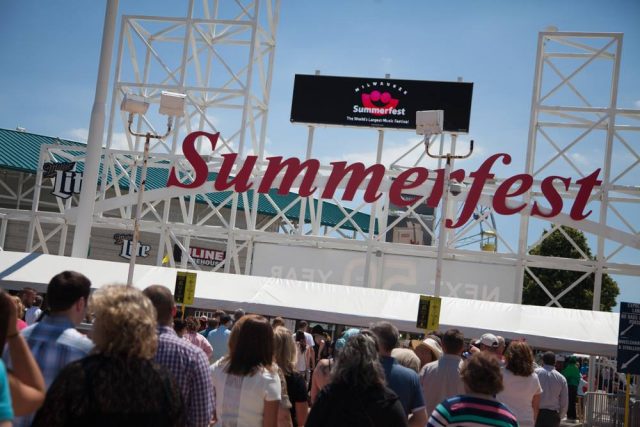 MILWAUKEE (July 6, 2016) – Summerfest officials are excited to announce a surprise promotion offering 50,000 tickets to next year’s festival in honor of the festival’s 50th edition in 2017. OnSunday, July 10, all patrons arriving at Summerfest from noon – 5:00 p.m. will receive one general admission ticket to Summerfest 2017. One ticket per person, promotion will run at all gates.

“In the spirit of “Summerfest Fan Appreciation Day,” we wanted to do something special to kick-off the year of celebration leading up to the 50th Summerfest in 2017,” said Don Smiley, President & CEO of Milwaukee World Festival, Inc. “With our deep roots in this community, a free ticket offer on a free admission day is a terrific way to start our year-long celebration and say thank you to all our fans.”

Summerfest 2017 commemorative tickets will be distributed while supplies last or through 5:00 pm, whichever comes first.  Tickets distributed for next year’s event will be good any day, any time.  Patrons can also visit Summerfest.com for complete details on the 50,000 for Summerfest 50 promotion.

Summerfest, the World’s Largest Music Festival, is well-established in the pantheon of music festivals.  With a 76-acre permanent festival site on the shore of Lake Michigan, including $65MM in recent development, Summerfest offers a world-class festival experience at an affordable price.  Founded in 1968, Summerfest is considered part of the fabric of Milwaukee, contributing over $187MM in economic impact to the local area.  Over the last 49 years, the festival has brought blockbuster performances from world-renown artists like the Rolling Stones, Tina Turner, George Carlin, Tom Petty, Prince, Bruno Mars, James Brown, Garth Brooks, Eric Clapton, Pearl Jam, Stevie Wonder, Lady GaGa and countless more. Festival officials will release additional promotions and events to celebrate the 50th Summerfest in 2017 in the next few months.

Summerfest 2016 will take place June 29 – July 3 and July 5 – July 10 from noon until midnight and will be closed Monday, July 4.  Following its 1968 debut, Summerfest has evolved into what is now recognized as “The World’s Largest Music Festival” and Milwaukee’s cornerstone summer celebration, bringing the music industry’s hottest stars, emerging talent and local favorites along with approximately 850,000 people from Milwaukee and around the world together each year for an unforgettable live music experience.  During the festival, the spotlight shines on over 800 acts, over 1,000 performances, 11 stages, delectable food and beverages and interactive activities, all in a world-class festival setting.  Patrons can also enjoy Miller Lite, the Official Beer of Summerfest.  For more details, visit Summerfest.com, Facebook.com/summerfest or Twitter: @Summerfest or download the 2016 Summerfest App.