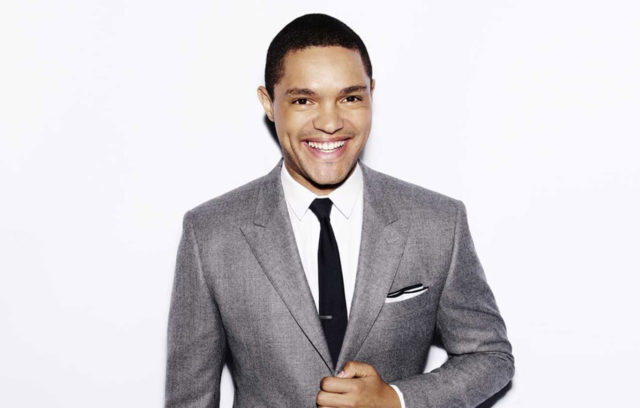 Plus he shares some of his favorite South African artists

On Sep. 9, Comedian and host of The Daily Show, Trevor Noah will be performing at The Riverside Theater.  A few weeks ago, I interviewed Trevor Noah. One of the questions I asked dealt with his favorite songs of 2016.

You can listen to the interview and check out his song picks below.

Considering his meteoric rise to fame, it would be easy to stereotype Black Coffee as just another black diamond, a BEE beat magnet out to mine the insatiable upwardly mobile urban house party market. But as he proved on his South African Music Award-winning album “Home Brewed”, this DJ and producer defies convention. Sidestepping Afro-house clichés and stage-managed highs in favour of restrained sophistication, Black Coffee’s penchant is for true Afropolitan house: home-brewed but fresh and future-focused. Expect almost sculptural balance and beauty. (via Facebook)

AKA (“Prince of South African Rap”)

Kiernan Jarryd Forbes (born January 28, 1988), known by his stage name AKA, is a South African hip hop recording artist and record producer. AKA has opened for Kanye West, Snoop dogg, Rick Ross, 2 Chainz, Big Sean and Kendrick Lamar in their South African tours. He has won many awards including “Best Street Urban Music Album” and “Male Artist of the Year” at the 18th South African Music Awards (SAMA) South African equivalent to the Grammys. (via Wikipedia)

Brenda Nokuzola Fassie was a South African anti-apartheid Afropop singer. Affectionately called MaBrrr by her fans, she was sometimes described as the “Queen of African Pop” or the “Madonna of The Townships” or simply as The Black Madonna. Her bold stage antics earned a reputation for “outrageousness”. She passed away in May of 2004. (via Wikipedia)

Born in the northern parts of South Africa’s east coast, Culolethu Zulu, also known as “Culoe De Song”, hasn’t looked back after putting passion in the forefront of his life. He’s been living music ever since his talent, as a Dj & Producer was acknowledged not too long ago.

Culoe’s serious music career began in early 2007 where he produced a piece that made him a feature in Black Coffee’s second offering, “Have Another One”. The track was named “100 Zulu Warriors” & carries a fundamental importance for Culoe De Song as he regards it as ‘his beginning’ in the circle of music in South Africa. (via Resident Advisor)