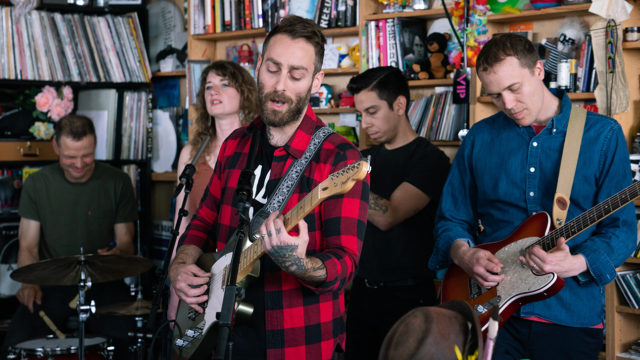 Who would’ve thought that American Football‘s fruitful reunion would include a children’s choir at the Tiny Desk?

Twenty years after a self-titled debut that featured one heartbroken mixtape-worthy song after another, American Football is writing some of the best music of its career right now. Once an emo trio from Central Illinois, American Football brought its expanded band to the Tiny Desk, including a vibraphonist, backing singer and, yes, six children from a D.C. choir.

American Football’s thoughtful and expansive return has yielded two self-titled records in just three years. This set culls from LP3, as it’s colloquially known, as Pure Bathing Culture’s Sarah Versprille steps in to sing backing vocals for “Every Wave to Ever Rise” and takes a verse on “Uncomfortably Numb,” whose recorded versions feature Land of Talk‘s Elizabeth Powell and Paramore‘s Hayley Williams. These spacious songs acts as revelatory meditations on what it means to grow older in love and relationships, with lovers and family.

For “Heir Apparent,” we reached out to members of the Children’s Chorus of Washington to sing the coda’s quiet mantra. When the 12-to-14-year olds asked frontman Mike Kinsella what the song meant, in order to capture the right emotion, he told them, in so many words, that it was a sad song, but that he’d like them to wear paper crowns while singing it. Just a touch of Kinsella irony, as he grinned ear-to-ear and they sang, “Heir apparent to the throne / The king of all alone.”